If you are looking for something scary and fun to run this October, try my game Strange Tales of Songling. It is light, easy and you can make characters in minutes. Inspired by Pu Songling's Strange Tales from a Chinese Studio, a classic collection of anomaly accounts, as well as by movies like A Chinese Ghost Story and the Bride from Hell, this is perfect for Halloween. It is a game about ghosts, fox spirits and strange magic. 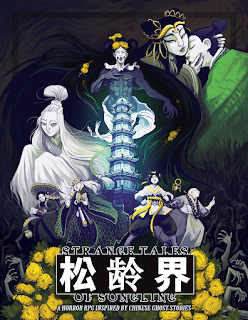 One of the things I tried to do in Strange Tales was focus on monster-of-the week style adventures because, in my experience, a lot of horror gaming is one-shot or mini-campaigns. This makes it easier to get right into the adventure, without any fuss.

Another thing that was important was keeping this firmly in the realm of horror and a big part of that is making characters vulnerable. This isn't a heroic game. This is a game where character death is a looming possibility. The monsters are powerful and characters can die.

The system is very simple. We keep the rules section to the fewest possible pages, eliminating anything that was non-essential. However it is based on the Wandering Heroes of Ogre Gate game, so if you need more complexity, even though the systems are different, it is fairly easy to port in rules from WHOG. Personally though, I find the simplicity of Strange Tales is one of the things that makes it so enjoyable to run.

While it was based on the Ogre Gate system, some key changes were made. For example, we paired defenses down to Hardiness, Evade and Wits (Ogre Gate has 6 defenses). Skills were similarly paired down and made easier to run on the fly (the goal was to make entries shorter so there was less need to look things up all the time, and so the material was easier to read when you did need to look things up).

The inspiration for the direction of the system and for the look of the book actually comes from the Moldvay version of D&D. This is not an OSR retroclone, though my adventure and setting content always has strong OSR sensibilities. Rather it applies the Moldvay feel and style to Ogre Gate. I had played in a Moldvay campaign while working on Strange Tales and it inspired me. I loved the simplicity of it. And I wanted to bring that approach to the system. So everything in Ogre Gate was streamlined and tweaked to fit that goal. 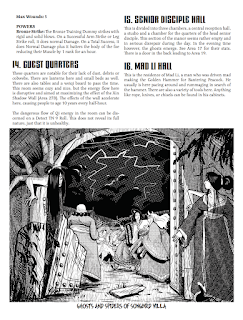 One important part of this was the introduction of Paths. Ogre Gate itself is more of a point-buy system. And character creation in WHOG takes time, by design. I didn't want that here. I wanted four Paths (Scholar, Ritual Master, Demon Hunter and Wandering Sword) that would facilitate character creation. We actually timed character creation and you really can jump right into the game (important when characters die more frequently).

I also took a 'show, don't tell' to the books content. What I mean by this is nearly half the book is adventures meant to illustrate how the game and its setting operate. I put a great deal of effort into the adventures. It might not be immediately obvious but a ton of research went into getting the locations right.

There are four adventures: Ghosts of Songbird Villa, Heads of Waterfall Bay, Lotus Fragrance, and The Judge From Hell. My favorite is probably Heads of Waterfall Bay, a murder mystery loosely inspired by the film Human Lanterns. The Judge From Hell is another I really quite like. Lotus Fragrance is actually based entirely on a story of the same name in Strange Tales from a Chinese Studio. Ghosts of Songbird Villa is an atmospheric exploration adventure set in a haunted manor.

I also tried to make each adventure a different type of location. Strange Tales of Songling emphasizes monster of the week, but treats each adventure as a kind of contained sandbox and monster hunt. So there is a conceit that "this is the adventure we are doing tonight" but within that framework it tries to maximize player freedom as much as possible. For this reason I thought it was very important to illustrate how locations could serve as 'contained sandboxes'. So Ghosts of Songbird Villa is an adventure set in a manor and the surrounding woods. Lotus Fragrance is small region with an inn, bandits, a scholar's residence and other locations. Heads of Waterfall Bay is set in a city, while The Judge From Hell is set in a village and the surrounding countryside. 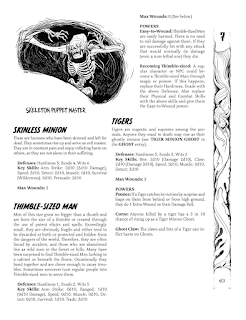 Another key aspect of the book are the monsters. This is a game for people who love supernatural creatures, and a game where monsters are seen as the engines for adventures. I want this to be the kind of RPG that the GM can run by simply picking a monster from the rulebook and spinning a night of entertainment around it.

There are tons of entries in the monster section and they are each inspired by something from Pu Songling, Yuan Mei, movies like Mr. Vampire or Killer Snakes.

If you haven't read Pu Songling, I definitely encourage it. Strange Tales from a Chinese Studio has inspired countless films, and it is also a very engaging book. There are many different versions out there. The Penguin edition is condensed but the prose is warm and it is a good way to get an overview. I became mildly obsessed with Strange Tales and found every translation I could. I think for thoroughness my favorite is the four volume Chinese Classics edition.

So give Strange Tales a try if you are in the mood for horror. It really is a pleasure to run, and it is one of the games I am most proud of.