If you need inspiration for spooky adventures this month, I highly recommend reading Strange Tales from a Chinese Studio by Pu Songling. And if you need a game to fit the themes of Pu Songling, check out Bedrock's own Strange Tales of Songling. Today I want to discuss Pu Songling's story Lotus Fragrance, which inspired one of the adventures in the Strange Tales RPG. Please note for the purposes of this post I will be drawing on the penguin translation of the story.

Lotus Fragrance is a very human ghost story, about a scholar named Sang who is visited by a fox spirit and female ghost, both of which seduce him but who are at cross purposes and in competition with each other. It is a playful tale but also romantic and occasionally frightening. The story is set up very well, where we are introduced to the idea of a haunting seductress through a prank played on the scholar by his friends before the real supernatural creatures arrive.

He is first seduced by a Fox Spirit named Lotus Fragrance, who he believes is a sing-song girl from a local brothel. He is then seduced by a ghost named Li. Often in these stories such creatures do harm to men by draining their life. And the twist here is Lotus Fragrance is protecting Sang from Li. But she is unable to convince him that Li is doing him harm.

Eventually Lotus Fragrance leaves Sang in anger when he refuses to believe, and when she returns months later, finds him hovering on death's door (a result of Li's evening embraces). But these are not just monsters, they are characters with human motivations. When Lotus Fragrance finds Sang in this state she rebukes Li saying:

"How could a beautiful girl like you use love as a weapon of hatred [....] to make love to him like that, night after night! Even a human lover would have endangered his health with such indulgence--let a long a ghost"

What follows is a debate between the ghost and fox spirit over which type of creature is more harmful to men. Li points out that fox spirits kill men as well, but Lotus Fragrance retorts that she is not that type of fox spirit and maintains "...there are harmless foxes, but never harmless ghosts."

In the tale it is clear that Li's nature is harmful to Sang but largely this seems to be a product of their excess. One of the commentators (Strange Tales is accompanied with commentary text) even states this clearly: "In truth it is neither foxes nor ghosts that hurt mortals: morals hurt themselves." In these kinds of ghost stories, female ghosts frequently seduce men (as do fox spirits), but their love drains men.

The two work together to cure Sang and bring him back from the brink of death. It succeeds, and the three live happily together for three months but eventually Li begins to vanish and then fades completely. However she is reborn in the body of a recently deceased daughter of a well-to-do family named Swallow. Sang and Lotus Fragrance Marry, then the scholar also takes Swallow as his second wife. Again they live happily for some time and Lotus Fragrance gives birth to a boy.  However, Lotus Fragrance grows ill. She tells Li to care for her son and expresses the wish that she will see them again in a number of years. Lotus Fragrance dies, and upon her death her body returns to its true fox form. Li cares for the boy as her own son. Years later they meet a young woman who is the Lotus Fragrance reborn. Upon meeting Sang and Li again, her memories of her former life restore. With Lotus Fragrance and Li both human now, they bury their former remains together at the same site and presumably the three live happily ever after. 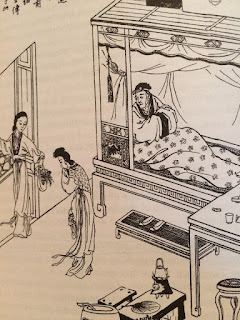 This synopsis leaves out a lot of details. Lotus Fragrance is one of the longer stories in Strange Tales from a Chinese Studio and there are many elements that are worth their own topic of discussion (for example when they meet Lotus Fragrance after she is reborn, they purchase her from a woman; and throughout the first part of the story, Li's small slipper---which is from her foot binding in life, or at this this is the implication---can be used to summon her). But here I just want to focus on the elements that I drew from to write the Lotus Fragrance adventure.

The first thing that struck me about this story when I first read it was how it didn't feel anything like any ghost story I had read before. It had moments one might describe as horror, but at times it reminded me more of something like Three's Company than a horror film. There was a playfulness to it and the fox spirit and ghost both seemed quite human. It was also not stifled by tone. It wasn't one note. There was a lot more than just horror. I think this opened up a lot of possibilities for gaming purposes. It always you to treat ghosts and similar creatures much more like any type of character and it also opens up your imagination because there are fewer tonal limitations. At least this was my sense reading this story and the others in Strange Tales from a a Chinese Studio for the first time. Ghosts have plenty of backstory and personality in English and American horror stories but they are usually antagonistic and you just don't see them form these kinds of relationships. Lotus Fragrance is different. It is a ghost story that has tremendous heart to it. 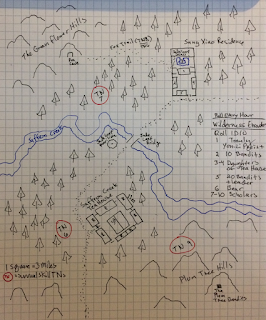 In order to make it work as an adventure I made considerable changes though. I made Li more antagonistic overall, because I felt the adventure needed a villain if PCs were to be involved. This isn't the only way I could have done it though. I tried to think of ways to create a human villain that would preserve more of the story. In the end, making Li the definitive villain of the adventure worked better for what I needed at the table. And it still allowed for Lotus Fragrance to largely remain the same. One element I did change that I wished I had kept, was the slipper. I think that could have been an interesting clue that would leave open the possibility of the player's accidentally summoning Li early in the adventure (which could be an interesting encounter). My adventure also makes it a bit more like A Chinese Ghost story. In the adventure Li isn't a solitary ghost but part of a ghost family who live at a nearby teahouse.

What I do like about the adventure is it keeps one of the core aspects of Lotus Fragrance, which is trying to save Sang from death. The players are only in as much peril as they put themselves in. Otherwise, the real threat is to the life of Sang (who is slowly being killed by Li). When we put Strange Tales together and planned out the adventures, even though Lotus Fragrance was written first as a blog entry, we made a point of introducing Sang in an earlier adventure in the book so that there would be a more compelling hook later on.

The first version of the adventure was written for the Wandering Heroes of Ogre Gate ruleset on the blog (I had done a series of posts for each story in the penguin edition of Strange Tales from a Chinese Studio). You can see the difference in the original map I designed for the region and the final map that Francesca Baerald did for the book. You can find that first draft of the adventure HERE.

The final version of the adventure in the Strange Tales of Songling Book is refined and expanded. It has more details on thing like how to run the adventure and is just structured more cleanly overall. But I think for the most part, you can get the same evening of entertainment from the blog adventure. The biggest difference really is in adjustments made due to playtest between the blog entry and the time the adventure was ready for the book.

Pu Songling's Strange Tales from a Chinese Studio had the most profound effect on my of all the material I was reading and consuming during the development of Ogre Gate. Personally I had an amazing experience drawing on Pu Songling's accounts and finding ways to use them in adventures. Lotus Fragrance was a turning point for me in terms of realizing just how far the ideas could be taken in an RPG. And it is a wonderful story, worth reading on its own if you have a chance. You can find free translations online. I personally recommend the Penguin edition because it is affordable and the prose has a nice feel (just be aware it is only a portion of the full book: there are multi-volume translations available and of those I recommend the Chinese Classics edition).