This is a short October-inspired adventure for Crime Network.

The PCs are instructed by the boss to whack Vincent Capuano, an informant for the FBI who is also a well-liked Capo in their crime family. Many in the family refuse to believe he’s a rat, some even say the boss wants to take him out because he thinks he’s a threat. Some wouldn’t mind a change of leadership. The boss wants it quick and easy, so there isn’t any dissent in the ranks. The truth is, Vinnie isn’t an informant, he’s a threat to the boss who just wants him out of the way. The problem is Vinnie is an undying creature of the night and no matter how many bullets you put in his head, you just can’t kill Vinnie.

The Adventure
This adventure is all about throwing the PCs right into the heart of a bizarre scenario and seeing where it goes. Supernatural things are not usually assumed in Crime Network, so your players won't be expecting Vinnie to come back from the dead. They may make their initial hit, taking him out at a diner or something, but he comes back the next day like nothing happened. Oh, he remembers that someone tried to kill him, he may even know it was the PCs, but he acts like nothing happened. If he is able to pin it on the party, he starts sending men to kill them. You can't hold back here. Vinnie is a tough guy and knows how to take people out. If the players don't spill blood, it's their blood that gets spilled.

Just let the game unfold naturally and react. Use Vinnie's soldiers as hitmen as needed. They can have some fights with Vinnie himself, slowly understanding his true nature (perhaps they witness him change or watch him chew down on some human meat). Again be merciless here. If he bites a PC in the neck and kills him, so be it. Even though he's already dead, Vinnie wants doesn't want to die. 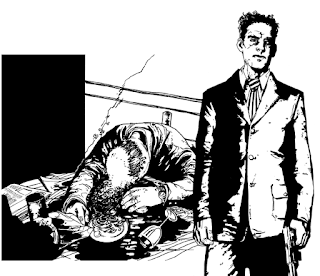 Stats for Vinnie, his crew and Angela (his mistress who turned him into a ghoul) are provided below. Read the Vinnie entry carefully as this explains his background and his abilities.

Fit the adventure to the campaign. The boss can be the head of the crime family the party is in or maybe even a rival capo.

Killing Vinnie
To properly kill Vinnie, he has to be submerged in holy water for several minutes (see his entry below). The players may figure this out on a wild guess but more likely they investigate things and find out from his Angela (his mistress and the woman who raised him from the dead as a ghoul) how to kill him. They might be able to figure out he is a ghoul by observing him and doing research. A priest could be a handy ally here and can probably tell them what they are up against (not to mention he can supply the holy water).

VINCENT “VINNIE” CAPUANO
Vinnie was just like any other guy, he earned his keep and took care of his family. He may have stayed out late some nights, and he might have had some women on the side, but his heart was always with his family. One night he came home smelling of booze and passed out on the couch. His wife Patricia took his phone and discovered text messages from his goomah about a wild night they had in the Cape. After downing a bottle of gin Patricia put two bullets in his brain and buried him in the backyard. What Patricia didn’t know was Vinnie’s mistress is a Strega named Angela. After Patricia buried the body, Angela did some hocus pocus and brought Vincent back to life. Now he’s back like nothing ain’t ever happened. He’s got no memory of the killing and feels better than he ever has before. He does remember fighting with Patricia, and has a vague memory of her maybe hitting him or pointing a gun at him, but no recollection of the shooting itself. As far as he's concerned, he just had a bad night.

But Vinnie’s got one small problem. He has think hankering for human flesh, and his skin is staring to look a little pallid. Oh, and he can shapeshift into different animals sometimes as well as any person or creature he’s eaten in the past 24 hours. That Strega turned him into some kind of Ghoul.

As if Vincent wasn’t bad enough, this whole Ghoul thing has really ratcheted up his temper. He earned respect from his men for a reason, he made good on his promises, rewarded loyalty and was merciless to those who got out of line. His only option now is to take out whoever is after him and get rid of the boss.

Vincent is superstitious and believes a guardian angel watches over him. Should the players kill him in any way, he chalks up his survival to his guardian angel. However if it becomes clear something supernatural is afoot, after some initial revulsion, Vinnie embraces his new nature and uses it to his advantage. Eventually he makes the connection to Angela but rather than show gratitude, he becomes resentful and spends more time with his family.

Vinnie almost never carries a firearm. He leaves that to his men.

Powers
Immunities: Vinnie just can’t die. Shoot him in the head, boom, he comes back the next day. Cut him up into pieces, the bastard just regenerates over the next 24 hours. The only way you can kill him, the only way to truly take him out, is if you give him a bath in a tank of holy water. If he stays submerged in holy water for two minutes, his body disintegrates and his soul is released (probably south, but who knows).

Bite: When he’s feeling hungry, Vinnie’s teeth become sharp and narrow, perfect tools for chewing through some human flesh. These babies do 5d10 damage on a successful attack roll. They also leave a nasty infection. See Infection below.

Infection: Anyone bitten by Vinnie who takes damage is exposed to sepsis. When a character is exposed, roll 6d10 against Hardiness taking the single lowest result. If that meets or exceeds the Hardiness Score, Sepsis sets in. Treat Sepsis like any other disease, using the table below. Use of proper antibiotics provides a +2d10 to the Medicine Roll to treat sepsis.

ANGELA
Angela is from Revere and it shows. She wears nails and lots of make-up, and dresses her hair up real nice, but don't let that fool you. Her father was in the military before joining the police and made sure she knew how to handle herself. Plus she goes to the gym on a regular basis and can bench more than most men. And then there is the whole witchcraft thing.

Angela is a Strega, a kind of witch. Her mother before her was a Strega as well. She usually uses her knowledge for small things, nothing evil or deadly. When Vinnie didn't call her in the afternoon, she knew something was up and went to his house. She found his body in a quickly dug grave out back and performed a ritual her mother taught her to bring back the dead.

Angela is having second thoughts now that Vinnie is alive. At first he spent more time with here, but when he realized what she'd done, he started avoiding her and began spending more time with his wife and kids. She is irritated enough to spill the beans on how to kill him for the right price.

PATRICIA
Patricia Patricia is smart and loves to read. She also speaks french fluently (a point of pride for Vinnie). She was going to become a school teacher but dropped out of college soon after Vinnie proposed. She and Vinnie are from the same neighborhood and she knew from the start what it meant to be married to a guy like him. In a lot of ways she liked the respect his affiliations afforded her. She could even tolerate his girls on the side once in a while. But his infatuation with Angela was different. He was more emotionally attached to her and Patricia became jealous. When he came home late one night she looked through his phone and found text messages between him and Angela. They were explicit but what bothered her was he told Angela that he loved her and wanted to spend the rest of his life with her. Patricia drank a pint of gin and fired two bullets into Vinnie's head with his own gun. Had she been sober, that never would have happened. Not a violent person by nature, Patricia panicked and buried him in the back yard as quick as she could.

A day or so later, Vinnie strolled back into the house like nothing happened. Patricia started going out of her mind. She couldn't figure it out. Eventually she remembered rumors about angela and her mother, that they were both Stregas. Now she doesn't know what to do. She is afraid of Vinnie and thinks he is the devil in human form. She can tell he's changed. But she also feels guilty for what she did to him. 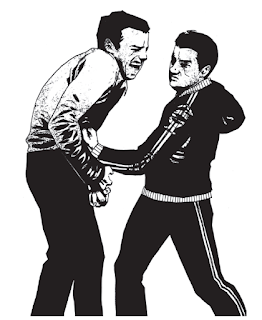 DANNY "THE KARATE KID" DI LUZIO
Danny is a fast talker and good with his numbers. He acts as a sort of adviser to Vinnie and is a prime candidate for consigliere should Vincent become the boss one day. Despite years of karate from his youth, Danny can't fight worth a damn so the crew calls him The Karate Kid. However, he ain't bad with a gun.

VICTOR "CANARY" CARLO
Victor is wide and muscular. He lifts in his spare time and occasionally competes (his big claim to fame is nearly winning the Mr. Universe Championship in 2011). They call him Canary because he can he can sing like Andrea Bocelli and his grandfather was in fact an opera singer. He is also Vinnie's driver and muscle.

BILLY THE HITMAN
Billy is a hot-head from Malden with an appreciation for the fine art of silencing rats. He is unusual in that he doesn't really look much like a mobster. He could almost pass for a WASP the way he talks and dresses. No one knows where he picked these traits up, but he works them to his advantage. Most people lower their guard around Billy.

Billy is actually second generation Italian, unlike most of the crew who are 3rd or 4th generation. His mother is from Abruzzo and he speaks the language fluently.

TOMMY CENTO RUSSO, RICK "DUMB BASTARD" SPINELLI AND JIMMIE FISTS
You can use the same stats for Tommy, Rick and Jimmie (just note that Rick's Wits are a 4). They are the mediocre members of Vinnie's crew. He frankly doesn't care much if they live or die. He's all smiles when they are around, but he knows the crew will be stronger without them.