BANG BANG YOU'RE DEAD: A SECOND LOOK AT UPPING LETHALITY IN CRIME NETWORK

I wrote a blog post about increasing the lethality of Crime Network in 2012. I want to take another stab at it here, focusing on the methods I now believe work best. These are not terribly new, as I've mentioned them before, but folks who never read the original post may find this article helpful.

A Bit of Background 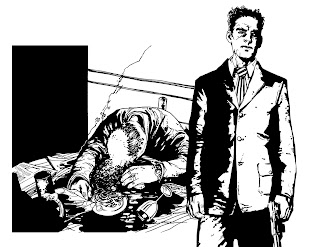 When I first designed Crime Network it was with Steve Bowden using a completely different system.  At the time it wasn't called Crime Network, it was just called Cosa Nostra. We made it pretty quick, but one thing we made sure to achieve was making the game lethal. While some of those early mechanics were rugged, they succeeded in making death an ever present threat. This book was shelved for a year or so and forgotten.

When Bill and I started Bedrock Games, Steve was also involved and he and I agreed to convert Crime Network to the Network system. While Bill wasn't involved in the early design phase of Cosa Nostra he, was the GM for all those early playlists. So the three of us all had a pretty good handle on the concept. The game was greatly revised over the following months to fit the mechanics created for Terror Network. The flavor of the text was mostly kept the same. One major change, which I don't think Steve was enthusiastic about, and which I sort of regret, was altering the setting from Boston to Baybridge. For reasons I don't really recall, I decided it needed to be a fictional city that could be dropped anywhere in the country. Personally I think that was a bad call. Keeping it in Boston would have worked much better and all of my Crime Network campaigns have been set Bean Town and the surrounding communities. Most of the other changes though were a vast improvement because we'd learned a lot in the intervening couple of years. But the one thing that never quite fit into the Network system well was the lethality.

Network is a fairly gritty system, in that NPCs and PCs pretty much have the same amount of health and really can't take much punishment before they start dying. So it is already quite gritty. For most genres I think this provides the right level of lethality. But Cosa Nostra, when we first ran it was LETHAL. Characters dropped like flies. The whole point was to have everyone at the table paranoid that they could get whacked in the blink of an eye. Basically, whoever got the first shot off, had a huge advantage and most sessions ended in total carnage.

This got a bit watered down when we fit it to the system designed for Terror Network. Here are three methods for fixing that issue. These are similar to the methods I proposed in my last post but different enough that you might want to check those out as well (HERE).

Method One: Open Damage
Simply treat all damage as open in Crime Network. This means you count every success as 1 wound, and every Total Success as 1 Extra Wound, adding them all together. So if you roll 3d10 for damage against Hardiness 5 and get 4, 7, and 8 that would be 2 wounds (as 8 and 7 both exceed 5). As an option this can be enhanced further by always adding +1d10 to any damage roll when someone has surprise. Characters in Crime Network can only take 3 wounds before dropping so this method is a good fit in my opinion. It doesn't make it a certainty but it makes it a real possibility.

Method Two: Lethal 10s
This is an extreme method that probably gets closest to the original Cosa Nostra rules. It may not be for everyone, and it certainly is harder to do a long term campaign when the lethality is this high. But for one-shots it can work great. It can also work great if the players are down with the idea. For the right group this is an exciting alternative to normal damage. Using this method all 10s are considered lethal. If that isn't enough death, you can crank it up by combining this method with Method One.

Method Three: Exploding 10s
This restores the original mechanic for rolling damage in the Network System. For the first three to four months when we were making Terror Network, this is how damage rolls were made. You roll the damage of your weapon (a pool of d10s) against the Hardiness of your target. You take the single highest result and if it exceeds the Hardiness Rating, you do a wound. If you get a 10, that is an additional wound, plus the die explodes, allowing you to roll for another chance to do damage (which succeeds as normal).