INTERVIEW WITH JACOB ROSS ON KAIGAKU: A SAMURAI RPG 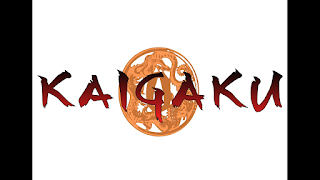 Jacob Ross just launched a kickstarter for his Japanese-inspired OSR Roleplaying Game, Kaigaku. The game has been available for free (HERE) for some time, but Jacob decided to crank up the quality with a kickstarter campaign and release a more polished final version. It looked like an interesting project and I thought many of my followers would have an interest as well, so I interviewed Jacob about Kaigaku.

If you want to learn more about the kickstarter, you can go HERE.

Can you tell me a little about your gaming background?
I've been a gamer for most of my life. The first RPGs that I ever bought were the D6 system from WEG and Last Unicorn Games' Star Trek: The Next Generation. I was heavy into L5R for many years. So much so that I ended up getting to work on two of the books for that game's fourth edition, Enemies of the Empire and Great Clans. From there I did work for Mongoose on Traveller, Chris Perrin's Mecha and some other small stuff. I currently amuse myself (and hopefully others) by writing supplements for various OSR games, as well as GM screens.

What is Kaigaku?
Kaigaku is, at its core, a reskin and expansion of The Black Hack by David Black. It plays fast and anyone who is familiar with old-school rules can be playing it in minutes. The system is easy to learn and to teach so rookies and veterans alike can have fun right out of the box. There are several rules additions that hark back to some of the more popular, but out-of-print samurai RPGs.

Why did you decide to launch a kickstarter for Kaigaku and what has the response been like so far?
I want the game to be as good as it can be. In the past I've used a lot of stock art, and there's nothing wrong with that, but I want to really make it stand out and customize the game. Kickstarter allows me to hire exceptional artists, such as Gennifer Bone and Peter Frain (and David Okum and GUillame Tavernier if we meet our stretch goals). We're a couple days into the campaign and we're over 2/3 of the way to our funding goal, so things are going quite well!

Can you describe the setting?
In a sentence, Kaigaku is an Asian-themed empire whose culture is primarily influenced by feudal Japan, but which also takes notes from China and Korea. Noble (and not-so-noble) samurai serve their masters for the glory of their clans. Each of these clans has its own agenda, which they publicly proclaim as a service to the Emperor, but often is privately for their own ends. Conflicts that arise in courts lead to clashes on the field of battle, all so that a few lords can bask in the prestige that their power brings.

You said it was written for dramatic potential; can you elaborate on this?
Kaigaku's biggest inspiration, as I wrote before, is feudal Japan. That covers a lot of time in the real world. What I've done is taken what I feel to be the most interesting parts of each of several eras of history and combined them into one setting. For instance, in Kaigaku the Imperial succession alternates between two branches of the royal family. This actually happened in Japan during the Nanboku-cho Period, and it went about as well as you'd expect. I like the drama that brings, so it's in the setting. Likewise, the daimyo in Kaigaku are ambitious and based on the clan leaders from the Azuchi-Momoyama Period, which took place after the Nanboku-cho Period. There's currently no shogun (the old supreme military ruler of Japan), which creates more of a power vacuum that the clans, and the PCs, can rush to fill. 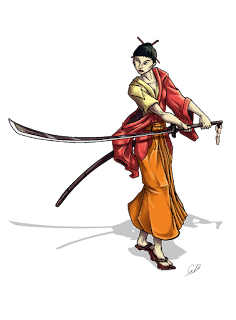 The presence of gaijin, or foreigners, is inspired by both the Azuci-Momoyama and the Meiji Period, which is probably most recognizable to Westerners as the setting of The Last Samurai. All of this combines to provide political, military and social crises from a variety of angles, which all adds up to more storytelling and roleplaying opportunities!

What drew you to feudal Japan?
As a punishment for something or other as a young child, my teacher made me write a 500-word report on Japan. Ever since then I've been hooked. The history, the language, the culture. Everything. I even spent a few weeks as a D-list celebrity in Japan!

Can you tell more more about that experience?
It's a long story, but it involves a message in a bottle sent from Japan, which found it's way to Oregon five years later. I was only slightly involved at the beginning, in that after a local travel agency and one of the major airlines sent the man who found the bottle over to Japan they sent the boys who sent the message to Oregon. As my after-school Japanese teacher was the one who translated the messages, one of the boys stayed in my home. The travel agency and airline wanted more publicity, so they generously sent my teacher and my class to Japan. We ended up on TV with people taking our picture everywhere we went. From the lovely cities of Fukuoka prefecture, to the legendary doll factories of Hakata, the castles of Kyoto and the deeply moving atomic bomb museum of Nagasaki, it was an experience that I'll never forget. One big highlight was being able to see performances of bunraku puppetry, noh theater and the tea ceremony. I didn't realize how widespread our story was until I got back home and several weeks later ran into people who recognized me from TV!

What are some of the sources of inspiration for Kaigaku?
Besides actual history, I really enjoy the films of Akira Kurosawa. They present both the romantic and gritty side of samurai life that I feel is important to historic truth and good storytelling. Cloud of Sparrows and Autumn Bridge, by Takashi Matsuoka, are a pair of novels that detail the final years of the samurai class, and I really appreciate their balance of action and intrigue as well as the more honest lens that they use to examine Japanese and American history. I also really enjoy the frenetic pace and visual style of Koei's Samurai Warrior video game series, especially their way of making long-dead figures seem real and human (despite the fact that those games feature swords that shoot lightning). Lastly, I'm inspired to some extent by L5R. They used to say "Rokugan, not Japan", well I say "Kaigaku, not Rokugan". I enjoyed the political interplay among clans, but I'm really committed to creating an original world.

What were some of the challenges of making a game about Samurai?
There's a tone that you have to aim for. While the code of Bushido is largely a recent invention (look back at the actions of men like Oda Nobunaga and see how "honorable' they seemed to act), it's expected in Samurai games. You have to write more than simple dungeon crawls, as life in this society is more than simply hacking an slashing. Samurai are expected to be a combination of artist and warrior, and it's tough to both get that across in the writing. Running characters this multi-layered who have to balance political and martial responsibilities, is also a challenge for GMs and players, but it's a rewarding challenge that I'm sure a lot of people want to rise to meet.

When the final book is out, what can people expect to see and where will they be able to purchase it?


The book is going to be a relatively slim volume with a a full game system and several optional subsystems for greater convenience (NPC generator, mass battle system, etc.). The initial fulfillment is going to be via Drivethrurpg, but I'm also looking into Lulu, Amazon and Barnes and Noble.
Posted by BEDROCK GAMES at 12:26 PM