DISPOSABLE DISCIPLES OF BONE KINGDOM SESSION 14: FACE IN THE FIRE 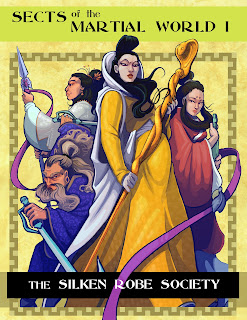 Stone Palace
An ornate box worth a small fortune arrived at Stone Palace. It appeared to be a gift. Chao and Shen Chun had it brought outside by a canal. Soon they heard screams and went out to find a horde of Stone Spiders pouring from the box and attacking locals. In all, 18 were killed, but the party was safe because it had been moved a fair distance away from them.

Chao put out word that he would pay a small fee for any dead Stone Spiders brought to him, and even more for living ones. Over the next four days dozens were delivered by the brave and the greedy.

Chao then went to meet his new sifu, Supreme Master Tung, just outside of the city. His sifu placed painting supplies on the ground and pointed to the horizon. "Make it beautiful," he said.

Chao spent the next several hours painting until he impressed Supreme Master Tung with his results. His sifu told him to continue mastering the skill and then return in two days for another lesson. As he left Supreme Master Tung said "Death is beautiful."

When he returned to the city, Chao decided to fake his own death and spread rumors that he had died. He then wore a hood to conceal his face and adopted a new name: Seven-Faced Owl.

Chao went to a painter's stall in the center of the city, where he met Mr. Ko*. Ko painted portraits for a fee and agreed to teach him the basics of painting. Chao insisted that he needed to master the art quickly. Ko expressed skepticism that this was possible but promised to do his best.

While he was at the stall, Chao noticed a woman watching him from across the way. He chased after her, and tackled her on the outer edge of town. When they crashed to the ground, a mask fell from her face, revealing hideously burned and scared features, as well as a missing nose. Sensing that she might be a student of Supreme Master Tung, he apologized. The woman said he didn't know how to tell friends from enemies and that she was protecting him for Glorious Death.

Shen Chun woke in the morning to discover a lover's bao with his name upon it, on a nearby table. He asked all the servants in Stone Palace if anyone entered his room at night, but they said no one had. That evening, he asked Chao to watch over him while he slept. As the night went on, a heavy air hung over Chao and he struggled to breath. He felt his life leaving his body and had to flee the room but not before he saw a lover's bao materialize on the table near the bed.

Chao went to the Spinning Ox Tail Theater and learned the art of disguise from a man named Gao. He wanted 50 spades a day and thought him over the course of the month.

Chao met his master once again outside town, this time finding a large camp fire and some painting utensils. "Paint the flames," said Supreme Master Tung. Chao made many attempts but each failed to impress his master. Finally late into the evening, as the fire burned to embers, he succeeded. Supreme Master Tung told him to approach and thrust Chao's face into the embers. His skin blistered and burned, but he managed to remain calm. When he returned to Stone Palace, the skin was swollen and red. By morning he was unrecognizable.

Tung-on
Bao Yang reached Tung-on and met Iron God Meng at a teahouse in his Golden Way Pleasure Quarter. There he presented 50,000 spades as tribute and said it was Meng's cut. He announced that he had expanded and taken over Stone Palace Sect. Iron God Meng was pleased but then looked a bit puzzled.

"Why has my tribute not increased?" he asked.

Bao Yang tried to explain that he needed to spend much of the earnings in order to continue to expand.

Iron God Meng persisted with his questions and demanded greater tribute each month. Eventually he was persuaded to wait two months so Bao Yang could put some things into place with the influx of money, then the tribute would be raised. This seemed to please Iron God Meng who invited Bao Yang and his disciples to drink with him.

Bao Yang politely refused but Iron God Meng pounded the table and insisted that he drink with him.

When the drinking was done, and Iron God Meng quite drunk, Bao Yang left to return to Stone Palace.

Stone Palace
When Bao Yang returned to Stone Palace, he gathered Chao and Shen Chun and they headed for Crocodile Sect. But before they left, he received two people looking to become his new disciples. The first was a man with a large sword and the stench of wine on his breath named Master Ban. The second was a woman named Zheng Min. He accepted both of them. Then the group headed south.

Ruomei spoke with King Iron Beard about the different animals at the headquarters (crocodiles, tigers, birds, etc). She started training under him to learn how to handle them.

A eunuch from The House of Paper Shadows arrived and received an audience with Hidden Arrow. He said he was sent by Fearless Cat who wanted to know about their progress finding her son. He suggested she might be displeased by the speed of their investigation and remained as a guest for the next several days. Hidden Arrow had his men watch the eunuch who clearly was spending considerable time snooping the grounds. Eventually he returned to the House of Paper Shadows.

Word reached Hidden Arrow that the rest of the party was on their way. He prepared a proper reception and banquet for them. After the banquet he and Bao Yang traded news. They decided to restructure the sect to make it more manageable. This took a considerable amount of deliberation but ultimately it was decided that Shen Chun would be made the southern vanguard of the Golden Corpse Alliance, and Bao Yang would be made the northern vanguard. They would effectively control all the sects and organizations in the north and south under the Golden Corpse Alliance. Hidden Arrow would placed in charge of the information network. King Iron Beard was elevated to chief of Crocodile Sect, and Ruomei was made the groundskeeper. Li Sou Chao was made 3rd chief of Crocodile Sect, while Golden Roc was made 2nd chief of Crocodile Sect. Chao decided not to take any formal titles.

Stipends were to be issued monthly.

Shen Chun continued to find lovers baos near his bed in the morning. He started collecting them.

A couple of days later, word reached Hidden Arrow that Relentless Corpse Queen was approaching. They made preparations to receive her.

She demanded to know why Iron God Meng received tribute, when she did not. She refused to split tribute with Meng when it was proposed.

"How do I know you won't just kill me after we kill him?" She asked.

Bao Yang persuaded her he had no such intentions, that their relationship was entirely different from the one between him and Iron God Meng.

She thought about it, and they decided to head north together and kill Iron God Meng.

*This character is clearly inspired by Gu from A Touch of Zen.

Posted by BEDROCK GAMES at 2:00 PM