Over the past year or so I’ve gotten to know Stephanie McAlea through her design work on one Wandering Heroes of Ogre Gate project. Miss McAlea now has a Kickstarter project out called Distant Realms and it looks very interesting. She was kind enough to do a brief interview with me about it.

The Distant Realms Kickstarter can be found HERE. 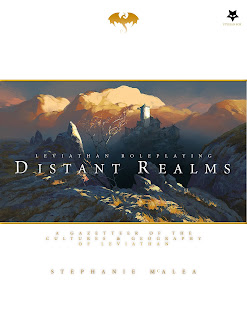 Brendan Davis: Can you tell us a little about yourself and your experience with RPGs?

Stephanie McAlea: I've been drawing maps since the age of 7 when my aunt bought me a copy of RISK and I became fascinated with places I could hardly pronounce like 'Kamchatka'. I discovered D&D with my friends about 1980 (I was 12) and we then moved to RuneQuest and Call of Cthulhu (primarily because of its grown up content and dark horror). I worked in numerous jobs including design studios but started drawing maps professionally again (taking a leap from my gaming table to my work station) about 10 years ago. Since then my art has vastly improved and I have worked for Miskatonic River Press, Golden Goblin Press, Chaosium, Mongoose, Cubicle7, Cakebread & Walton, and others.

Just over a year ago I came out as a transwoman and I've found the gaming community to be overwhelmingly supportive. Don't believe all the negative hype about the gamer community. It is the internet that can seem like its full of meanness, not gamers in particular. Currently, I'm drawing a fantasy map for client, drawing for my patrons on Patreon (who have been awesome!), running Delta Green at my local club in the daytime and then switching to playing Pathfinder in the evening.

BD: What is Distant Realms?

SM: Distant Realms is the gazetteer for my own fantasy world of Atuannu, but most people refer to it as Leviathan, the name of the main continent. I’ve been running games of RuneQuest in the setting for 20+ years and it has evolved somewhat from what was originally the world of Orb from the Avenger books (the map started me off, it’s amazing) and is now a fully fledged setting with some of the most popular races but also some new ones and some twists on the usual tropes. I decided to release the gazetteer before any core book to gauge desire for the setting and also to give GMs the chance to use the setting without being tied to a core rules system they might not want.

BD: What is the aim of the kickstarter?

SM: The aim is really to get an initial product out there for the setting. If it does well we'll move onto the core book, adventures, sourcebooks, and campaigns. If it just clears the target or fails then we'll end it with the gazetteer. Kickstarter is a great way to get your product out there but we'll see if there's a desire for it.

BD: This is a systemless setting but it sounds like there will be guidelines for scaling NPCs and other details to peoples’ preferred systems. How is this achieved?

SM: I chose systemless because I can never decide between RQ6 or BRP when I run it! Also, many gamers are at the point in their hobby where they have enough rules. They know and trust 1 or 2 rules sets and don’t need another... Setting fluff however, that’s another matter. Of course, no sooner had I launched the KS than backers started asking if there was going to be a rules system attached. With that in mind, we have a stretch goal that attaches 5 of the most respected rules settings out there; Pathfinder, Legend (D100), D&D5e, Fate, and Chivalry & Sorcery. It's looking like we'll keep the setting book separate (due to the sheer number of pages required to support 5 systems) and we'll release a free PDF booklet with all the stats etc in. The PDF will be available to everyone, even if they didn’t back the kickstarter, but only 3 months after the backers have theirs. 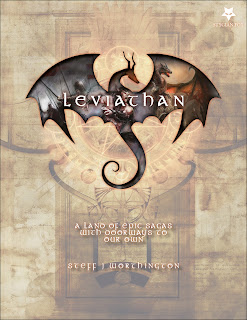 BD: The setting has connections to our own world and history. I like that it’s fantasy but has gates that can bring in modern characters from our world. What impact does this have on the game?

SM: Not as much as you think. The initial scenario is a camera crew that gets lost while looking for Bigfoot for a trashy TV show. They stumble through a gate and are captured (that's all I'm saying on that!). Yes, they have camera flashes, technical equipment, spectacles, but they soon find that batteries run dry, and things break. A week or two after arriving they're no different than the average Leviathan except without the knowledge to farm, fish, or support themselves (unless they generate a Bear Grylls type character, of course). A small marine squad could, conceivably, take over a town but 5.56 ammo is great against a sword but isn't that good against magic. And ammo runs out of course.

Leviathans seem to have a much better time coping with our world where everything is on tap as long you don’t mind all the flashy lights. Take a good long look at your postal worker next time he calls...

SM: I'm a life long Arthuriana enthusiast. I live a few miles from the worlds biggest Arthurian collection, situated in Mold (Yr Wyddgrug in Welsh) in Flintshire, UK. I grew up reading not the tales of knights in shining armour (a French subversion of the stories) but of Percival/Peredur, Gawain/Gwalchmai, Arddur/Owain, Mordred/Medrod, Myrddin/Emrys/Merlin and others from Welsh history. Sword battles against an enemy just seemed natural to me. Tolkien and roleplaying just seemed to cement that. I'd say my most direct influences are King Arthur, Tolkien (particularly the Silmarillion), RuneQuest, The history of the Twentieth legion Valeria Victrix (based in my home town of Chester/Caer), and Tacitus.

BD: What RPGs most influenced you and this project?

SM: Definitely RuneQuest (thank you Glorantha-daddy Greg Stafford!). Glorantha is an extremely rich world and more detailed than middle earth. It’s only a matter of time before someone wants to set a television show there, surely. Leviathan as a concept is more based in fiction than RPGs but Glorantha showed me Leviathan was possible, D&D gave me the key to the door, and Call of Cthulhu gave me the atmosphere. I'm hoping that visitors to Leviathan can experience lighter moments that remind them of D&D, nasty combat, terrible choices that need to be made, and the loss of friends that remind them of RuneQuest, and, very rarely, the dark and sickening horror they might encounter reminds them of Call of Cthulhu.

BD: The video preview is amazing. How was that put together?

SM: Ah, it was stock footage, Adobe After Effects templates, and a lot of sweat and tears. :)

About Stephanie McAlea
Stephanie McAlea is a Welsh cartographer and has been involved in the RPG hobby as a gamer for 35 years and as a professional in the industry for 10. Her previous work includes commissions for Chaosium, Mongoose, Golden Goblin Press and many more with her maps in titles such as The Horror on the Orient Express, Call of Cthulhu 7th edition, 2300AD, The Legacy of Arrius Lurco, World War Cthulhu, and Cthulhu by Gaslight (many under her pre-transition name of Steffon Worthington). Being from North Wales she has rainwater for blood, slate for bones,and the heart of a dragon forged in the mountains of the north (yet is surprisingly approachable).

Posted by BEDROCK GAMES at 3:17 PM