This is the campaign log for the Twentieth session of a google+run Wandering Heroes of Ogre Gate campaign. The previous session is described HERE.


In the last session Bone Breaker had gone to Hai'an and was trying to unite the martial world while Chen and San fended off an attack from the king's soldiers, allying with the Kushen. We left off when Bone Breaker was preparing to help Hai'an invade the Empire's client kingdom, Hu Qin, and after the Kushen had taken the city of Fan (capital of the southern kingdom, Li Fan). 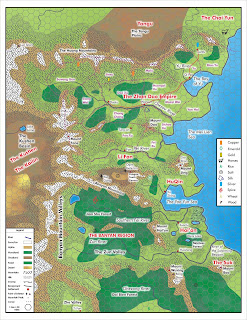 San and Chen
As a reward for his bravery and skill, Ganbaatar, leader of the Kushen, gave Chen 15 Li of land between Snake Peak and Opulent Fruit Hill. Ganbaatar also made Chen a Commander of 10,000. After meeting with Ganbaatar, Chen and San went south to find the Witch of Zhaoze Zhou so San could learn Merciless Black Claw technique.

On the way south, Chen returned to Heaven Palace Sect after receiving word that Dawa had taken over. He appeared before her and she offered him use of her Talisman for free as reward for his help. She also said if he obtained the other two talismans for her, she would grant him another use.

Bone Breaker
As Bone Breaker made his way north to the city of Xuanlu, for a meeting with Hai'an's generals, he and his retinue heard the sounds of flute music through the forest. The surrounding trees were bare white, and as the sound filled the area, they saw Leather Shadow Puppets dancing upon the tree's surface. Abbot Fire Brand fell to the ground as they paralyzed his legs. Bone Breaker too found his left leg went dead. He screamed for his heroes to spread out and kill the flute players, also sending out Spear Tip to deal with them. This was clearly the House of Paper Shadows using its magic against them.

Bone Breaker tried to reason with their attackers, telling them he had an agreement with the House and that they were working together, but the music only intensified. With his one good arm he punched a nearby flute player in the throat and heard the sounds of blades sinking into flesh all around him. Within a few minutes things had died down and his people stood victorious, rounding up the surviving players for interrogation.

Bone Breaker demanded information and when it was refused he broke one of the Flute Player's fingers. However, ever since his meeting with Iron Sky Maiden, he'd been wearing the Belt of Mercy and it immediately squeezed him, causing not just pain, but damage to his body. He relented and left Jade priestess to gain speak with the man. She learned that the order came  from the head of the House of Paper Shadows.

They continued on to Xuanlu.

San and Chen
Chen and San reached the Banyan and traveled to Cha, where they paid a fisherman named Guan and his sons to take them through the swamps of Zhaoze Zhou. They heard a cry for help deep in the swamp and saw a face bobbing out of the waters. The man screamed for help but they moved on. His cries intensified, so they returned. Looking closely they saw crocodiles swarming nearby. As they approached, the man plunged beneath the water. One of Guan’s sons grabbed a long pole and pushed it down into the swamp to help the man. Something grabbed the pole and nearly pulled him overboard. He would have fallen in but Chen grabbed him at the last moment, saving his life. They decided to leave and press on to the Witch.

They found Li Sou Chao, the Witch of Zhaoze Zhu, in her hut. She agreed to teach San the Merciless Black Claw if San used it to kill Queen Lu Zhi of Heiping Sect. San was reluctant and instead agreed to be the witch’s disciple provided she didn’t have to honor her grudge with Heiping. The Wtich agreed and San kowtowed three times and formally acknowledged her as Master.

On the way back north, after they left Guan and his sons in Cha, the group stopped at a village and met an old man named Ouyang Shi. He was skilled in the art of massage and Chen asked him to teach him the basics. Ouyang agreed for a small daily fee and comfortable travel arrangements.

Bone Breaker
Bone Breaker went to Xuanlu to speak with the generals and found they looked down on him for being a merchant. However he had the King’s seal and an order granting him authority to organize the campaign against Hu Qin. He was met with resistance when he refused to give details on his precise plans and instructed the generals to simply mobilize. One general, Yan, was particularly dismissive of Bone Breaker's standing and kept pressing him for more information. General Jing was able to speak in private with Bone Breaker and get some assurances. He said they could be ready in about ten days.

Satisfied, Bone Breaker then sent his people into position and sent an instruction to Bronze Master. Bronze Master, who was disguised as General Dee (the military leader of Hai'an) was to gather all the generals in the Towering Chrysanthemum at an appointed day and time. He then tasked one of his men to go and kidnap the king, he then sent the rest of his retinue to go help Bronze Master.

San and Chen
When they reached northern Li Fan, San and Chen went to inspect their new land. Chen went to master Kwan’s house and informed him of the change. At first Mr. Kwan objected, saying it was his land. But Chen grabbed his finger and twisted him to the ground, telling him the Kushen had taken over and the land belongs to them now. They talked for a bit and Kwan agreed to collect for him if his tax could be overlooked.

Making rounds through the farmsteads, Chen was attacked by a farmer with a hoe. He came to the man's house to inform him that the land now belonged to him and was going to collect 10% of their harvest. The farmer charged at him and called him a traitor. Chen had his Kushen soldiers detain the man and his wife. He then used his Kung Fu to smash one of the man's walls.

When the man still refused to submit, and even spit at him, Chen had him sent to work in the salt mines. He then imprisoned his wife, and gave the couple's land to one of his Kushen.

The wife screamed that Lady Xinyu, a great martial hero who protected the people, would destroy Chen and his men. Chen asked his soldiers to find out about Xinyu. He then went back to Heaven Palace Sect and told Dawa he knew what he wanted her to use the Talisman for. He asked if she could transport their Qui Pan Fortress from Dragon Tail Mountain to the land they'd just acquired and encircle it with a river of poison. Dawa tapped the Talisman and a golden light flowed from it to the heavens and she told him the change was made.

Posted by BEDROCK GAMES at 8:09 PM