There are a number of ways to advance NPCs in Wandering Heroes of Ogre Gate. One of my favorite is the Going into Seclusion method in the Lady 87 Campaign book (you can also see an early version of this idea on the blog). Sometimes I use more granular methods or random ones. I put the two tables below together today for my Celestial Plume Masters campaign. 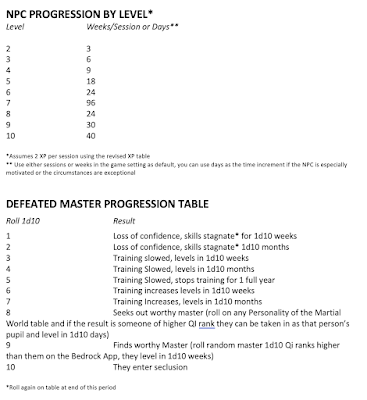 The first table is a method for calculating NPC advancement over time. It can be done session to session, like PCs, or in time in the game world (using either weekly or daily increments----you can also use monthly if you prefer). This assumes an average of 2 XP gained each session/week/day and just charts it out over time. It also uses the revised XP chart from the Bedrock Games website (rather than the one in the rulebook). One thing you will notice is a bit of a hump at the Qi rank 7 mark, because this is the entry point into the profound levels of martial arts. So it takes considerable time to get there from Qi rank 6. After Qi 7 however it reduces back down to a more reasonable level.

This can be used to figure out a characters Qi rank when they are re-introduced (if they were Qi 3 when the players met them 20 sessions ago, they could be Qi rank 6 in the present session). It is just a tool. You can use any approach you want here, from eye-balling the level to giving your NPCs XP the way you do PCs.

I also came up with a random method, the above Defeated Master Progression Table. This was designed to handle NPCs who suffer a big defeat at the hands of the players, to determine how they react, but I may turn it into a more general table for randomly determine a given NPCs current level.

Because the table was designed this afternoon it is just a rough attempt. I am sharing it with my players before the game for feedback and will probably make changes based on that, then make further changes after using it in play (and then create a modified version for NPCs in general).

The Defeated Master Progression Table was designed with Li Liang in mind, an NPC one of the characters defeated in humiliating and painful fashion to strike a physical and psychological blow (with the aim of impacting her performance in a duel one year from now). So it was created with that specific tactic in mind (and meant to reward it much of the time, but also keep open the possibility that the defeat serves as a key motivator for the NPC). Once I have a chance to test it out tonight and make some changes I should be able to write about how it went and possibly put together a new version.

Posted by BEDROCK GAMES at 3:36 PM