Wei Ziying: A skilled poisoner and physician, with ties to the Relentless Corpse Sect, Wei Ziying is a disciple of the Celestial Plume Masters. He also has a longstanding friendship with Kuo Qingzhao, who wishes to know more about the poisons that killed his wife (poisons Wei Ziying knows the secrets of). Grudge: Ravenous Nun Xuanji (for the murder of Red Eagle)

Wang Haoyang: A master of stealth, Wang Haoyang is one of the Celestial Plume Master disciples. He has a lifelong friendship with Pei Ye of the Vermillion Bird Teahouse, but has attracted the affection of another member of that organization, Fan Zhen'er (he does not return the affection but wishes to avoid creating friction within the Vermillion Bird Teahouse, and possibly creating enemies). Grudge: Guan Nuan (for a duel he escaped, she feels she lost face because he was weaker than her and should have been an easy victory)

Hei Ling: A one-eyed chief in the Celestial Plume Masters, Hei Ling is the father of Li Liang, whom he wishes to cease practicing her Toad Style kung fu because of the physical toll on her body. He had Li Liang with Qixia the candied fruit in his youth and since then Qixia has grown hostile. He has a working relationship with the Wu Sisters. Grudge: Qixia the Candied Fruit Vendor (of Hai'an). Grudge: Qixia (many reasons related to their pre-existing relationship)

Iron Tiger: The newest member of the party, sent by Night Thorn to help them expand. He has a longstanding friendship with Iron Beggar Sun Kang, whom he wants to leave his lap of luxury in the House of Flying Lanterns so he can train with the Nature Loving Monks and improve his Kung Fu. Iron Beggar in turn wants Iron Tiger to leave the Celestial Plume Masters. Grudge: Pei Ye (he murdered her favorite client, Golden Cobra).

Wang Haoyang, Wei Ziying and Hei Ling went to ambush an incoming caravan of celestial plume sent from Hai'an to Qixia's organization (they were acting on information acquired last session). They saw a cart flanked by 10 members of the Golden Heroes Sect. Stopping them they demanded to know if there was plume inside and one of the Golden Heroes said it was none of their business, that they should let them pass to make their delivery.

The party sprung into its attack, with Wei Ziying and Wang Haoyang striking from the shadows*. While the Golden Heroes saw Wei Ziying before he struck, they did not see Wang Haoyang. While the Golden Heroes put up a fight, they were dispatched in the end, with one of their leaders attempting to flee, then attempting to play dead, before being stabbed through the spine.

Peeking into the cart, the characters found nothing but bouquets of orchids piled against the walls and filling the entire space. On top was a note addressed to Qixia, filled with sentimental expressions of longing, love and devotion. 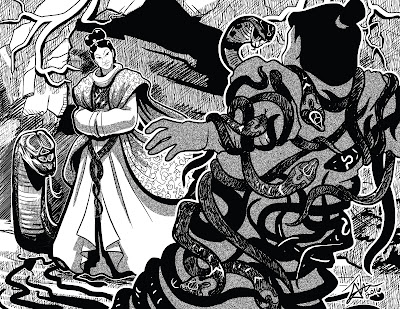 Iron Tiger had decided to remain at the residence as the rest of the party dealt with the plume caravan. They were building a martial arts school to help recruit more men to their cause against the 87 Killers and he wanted to give it attention. As he was giving instruction, a man in green robes with a very serious looking gaze asked for entrance and said he had heard there was a master with highly impressive Kung Fu here, that he would like to test his skills. When asked his name, he told Iron Tiger he was Emerald Cobra^.

The two faced off, with Emerald Cobra attempting a tornado kick that Iron Tiger countered. Iron Tiger followed with his Iron Tiger Strike, breaking Emerald Cobra's leg, who gave up after the injury but expressed interest in learning the style when he recovered.

The rest of the party started returning and Wei Ziying recognized Emerald Cobra as the former lover of Relentless Corpse Queen. Fan Zhen'er also knew of him, and confirmed he was a member of the Cobra Clan, a group who resided on Mount Fone, between the Empire and the Kushen.

This information concerned Iron Tiger who felt Emerald Cobra could be seeking revenge for the Golden Cobra (who was also a member of Cobra Clan). So he took him to a wine shop and spoke to him of his plans to make his school number one in the martial world. He also asked about Golden Cobra, expressing clearly his worry about the past. He asked, and Emerald Cobra agreed, that they become sworn brothers to cement their loyalties.

NEWS OF THE MARTIAL WORLD

Leng Ziying arrived at their temporary residence and seemed interested in the new plume source. He told Hei Ling that the 87 Killers and the Jade Owl Bandits had formed an alliance after fighting with one another, and that a marriage was involved to help seal it. This news was troubling as the party had heard recently that Long Ma Hall also had chosen to ally with the 87 Killers.

Good news did also come with Leng Ziying. Rong E'hua's robbery of the bank in Mai Cun was a success and she gave 2 million spades to their treasury. She had also burned down several of Lady 87's storage units (these were filled with valuable trade goods).

Meanwhile, Iron Tiger, who had written to Yang Chun asking for more men, received a message informing him there were not enough men to spare, that he had assigned Iron Tiger to work with Hei Ling so the two could form alliances, recruit and form a strong front against the 87 Killers.

Still suffering the effects of Qixia's poison, Hei Ling weighed his options. He knew that her lover, Fragrant Sword, probably held the antidote (as she had placed it with him when they were 'together'). But Fragrant Sword was in Dee, which is far to the south and they likely wouldn't make it in time. So instead they headed back to Tung-On thinking that Sima Hao might help.

Iron Tiger remained in Jinsa, sending word for skilled physicians and animal handlers, whom he offered to pay well.

Hei Ling found his daughter in Gao Cun, Li Liang, at an open air wineshop in a drunken stupor. He could see she had been badly injured but on the road to recovery. He asked what happened and she said a man disguised in a mask** attacked her and broke a number of her bones. She was angry and depressed at the loss and no longer wished to pursue training.

Hei Ling rebuked her and expressed some shock she was so easily giving up*** saying "Come on, you can't give up after one big loss. Particularly to a man too afraid to show his own face. I thought you were better than that."

She slammed her fist on the table and said he was right, that the man was a coward and she would train harder so that she could find him and kill him.

Hei Ling told Li Liang that he had killed Qixia, her mother then gave the letter she had addressed to her, which read:

Your father is a bad man. His crimes are countless. He killed my sister and threatened to kill you if I ever showed motherly affection. My heart aches for the pain he made me cause you. He has no regard for social mores and would exploit you for his own gain. Do you trust him. You must kill him!

Li Liang did not believe the message, as she knew her mother's personality well. She only expressed anger at her mother's passing, but the anger was directed at Qixia, not Hei Ling. She told her father to have his men gather her body so she could make a new handle for her giant mace.

Hei Ling then told her he was suffering from Qixia's Five Dragon Venom. Li Liang told him to take a seat and used her curing palm to expel the venom from his body.

*They have been using stealth to their advantage as a tactic in fights, with Wang Haoyang getting an extra boost by using his Stealth of the Spider Demon ability.

**The man was Iron Tiger who donned a disguise and attacked Li Liang to shake her morale before she trained for the upcoming duel with her father.

***In this instance, I asked for the player to make a Command or Persuade roll because I was a little unsure of how Li Liang would respond, and he got a 10.

^Iron Tiger Killers a man in Da Guan named Golden Cobra and this detail would later become important as he would vet the man for his loyalty.

Posted by BEDROCK GAMES at 5:42 PM