One of the most frequent questions I get about Ogre Gate, and one of the most common questions I see about it online, is "what is the power level/what does it emulate"? I want to attempt to answer that here, as I know it can be difficult to gauge if you haven't played the system and are just looking at the book with the thought of running it for a specific concept.

The first thing to understand about Wandering Heroes of Ogre Gate is its primarily intended to emulate wuxia. But it takes a pretty expansive view of what that entails and it throws in other genres as well. One of the key models for me when I was making it was the 2006 Return of Condor Heroes series, the 2003 Heaven Sword and Dragon Saber and the 2008 Legends of Condor Heroes series*. Another of my primary concerns was being able to run a campaign emulating this take of Jin Yong's classic trilogy.

However it was also influenced by classic shaw brothers movies from the new school wuxia era (beginning in the mid-1960s with films like Temple of the Red Lotus and Come Drink with Me). This was a much more grounded style of wuxia. And it was influenced by more high powered and over the top films like Web of Death, A Chinese Ghost Story and the Painted Skin movies. Journey to the West and films like A Chinese Odyssey and Journey to the West Conquering the Demons were also influential. Pu Songling's Strange Tales from a Chinese Studio also had considerable influence (especially on entries like Ogre Gate Inn and the Strange Land of Li Fan). So I would say the range was meant to be from wuxia to folklore and supernatural to legendary levels like Monkey in Journey to the West, or immortals in the show Journey of Flower.

One thing to note about how Ogre Gate is designed is the leveling system, while it only goes up to 24 on the XP chart (and that is divided into Martial Heroes, Profound Masters and Immortals), it is assumed this can keep going if the GM pleases. Many of the god entries, for example Supreme Judge Yu are meant to simply be much higher on that chart. Importantly this isn't fleshed out systematically in the book, so the options won't all be immediately available RAW but the idea was a GM could develop those things as needed (which is largely what I did in my own campaigns).

My personal opinion on Ogre Gate is it works very well emulating wuxia to more over-the-top wuxia and even stuff at the level of Zu Warriors from the Magic Mountain. But at those higher immortal levels it requires more work. A lot of that work is available in various supplements but it is scattered (Ogre Gate Inn has a few, The War of Swarming Beggars on this blog has some, the Profound Masters of Ogre Gate posts on this blog have many, etc.).

To give you an idea of the power levels available the game has three tiers: martial hero, profound master and immortal. Martial hero is levels 1-6, profound masters are levels 7-12, and immortal is levels 13-24. Martial Heroes basically just have access to Kung Fu Techniques and a few other things (like magic rituals). Profound Masters have access to Kung Fu Techniques and profound techniques (which are considerably better). Profound masters get other benefits as well such as being able to increase skills to 4d10 (3d10 is the cap for normal characters). Immortal characters gain all kinds of benefits, including Immortal Powers, Insights, skills going up to 6d10, and being able to ignore the soft die cap of 6d10, so they can roll up to 10d10 in some circumstances. They also gain Immortal Abilities (agelessness, immunity, celestial weapon bearing, regeneration, etc).

To give an example of different power levels, all Kung Fu and Profound Techniques have a Qi Level (and you have to be that Qi Level to use the technique). Normal Kung Fu techniques go up to Qi 6. Here is a Qi 1 ability: 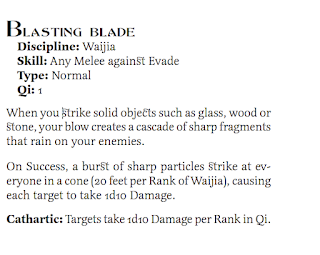 Compared with a Qi 6 ability: 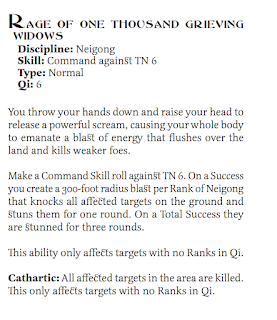 These are both external martial arts styles so here is an example of a Qi rank 4 Neigong technique to give more variety: 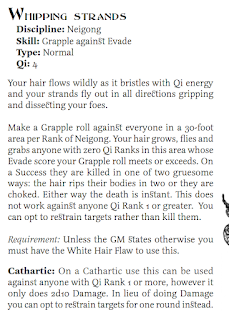 And here is a Qi 7 Profound Technique: 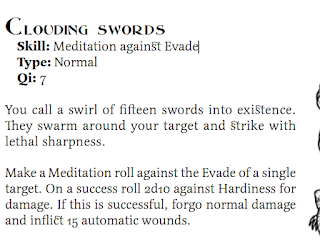 There are also evil kung fu techniques (some of which are very high level and only available to immortals). These usually give you demon flaws. Here is an example of such a technique: 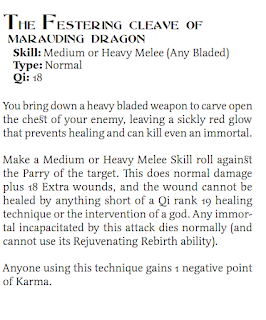 For context, characters all have a number of Max Wounds equal to their Qi rank times 2, plus 1. So a Qi rank 3 character has 7 Max Wounds.

To understand something about what immortal power levels are like, here is a section of some of the immortal powers (they get to pick one each level): 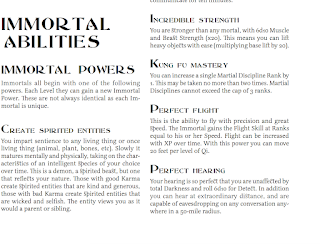 This is one area I had hoped to expand more in the game. There are 12 Immortal Powers in the core book and a couple more HERE. They are the sort of thing where I saw many as being tailored to individual PCs (so the GM is encouraged to make more based on what is in the book).

Another key aspect of immortals, and one of my favorites, are Insights. These are gained if you succeed on attempts at going into seclusion and mediating. You can get up to four and they are rolled randomly. Here are the tables and some of the Insights: 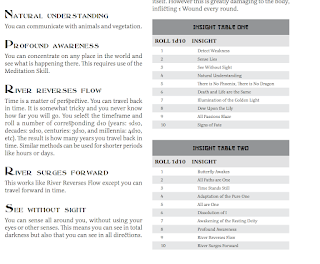 And here is an entry that is pretty representative of what Insights are about: 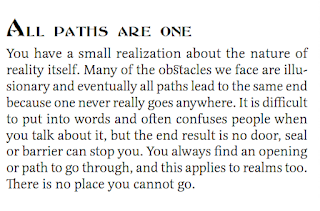 There are also realms, monsters and immortals to consider. You can see a good example of how the power and setting level scales to things like Lunar Realm HERE. And below is the monster section entry on Supreme Judge Yu: 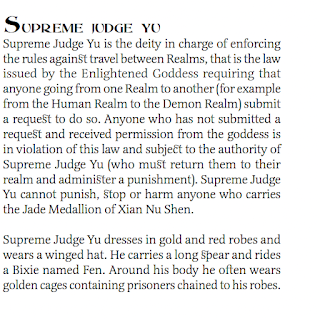 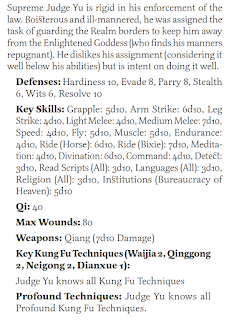 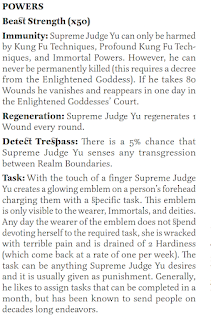 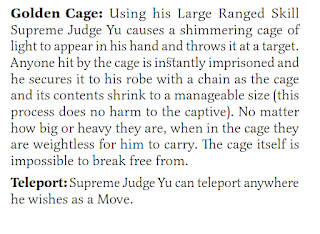 It looks a bit rough I know because I had to extract it, but as you can see Supreme Judge Yu has a Qi Rank of 40 (and he is not the most powerful deity in the setting). And to give an idea of supernatural threats, here is one of my favorite monsters: 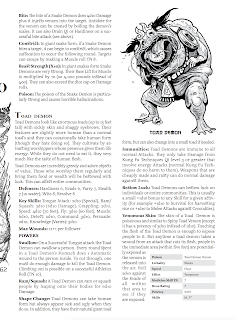 So the scale of power is pretty large, but I would say there are portions where the game is more focused on (like the power scale from Martial Hero to early Profound Master levels). You can scale it into the high levels than that. It may take a little more work though because there isn't as much material in the core book (the books has a huge list of Kung Fu Techniques but much smaller lists of powers for higher level characters like Profound Masters and Immortals).
I hope this is useful. If anyone has any questions, feel free to reach out through the contact page on this blog.

*If you are interested in these series note these ones are not related, the proper follow-up to the 2006 Return of Condor Heroes is the 2009 Heaven Sword Dragon Saber, for instance. Also the 2008 Legend of Condor Heroes takes liberties with the story that angered some viewers.

Posted by BEDROCK GAMES at 3:18 PM