This is part of an ongoing series as I prepare to publish the Sons of Lady 87 campaign book for Wandering Heroes of Ogre Gate. Mostly it is just me responding to questions I have seen people ask about Ogre Gate (or highlighting something in the rulebook people might be less aware of). You can see the previous entry HERE 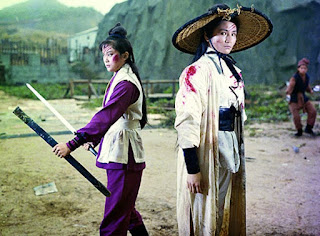 One of my favorite wuxia films is Lady Hermit with Cheng Pei Pei. The protagonist, Lady Hermit, is forced into temporary hiding after a nearly fatal encounter with Black Demon (a local martial bully), whose Shadowless Claw left her with a serious injury that she is hoping to recover from. She has spent that time devising a way to overcome his technique, and devises on of her own in response. It is based on shifting the weight in her body as she leaps and attacks, and she uses a cat falling and landing on its feet as a way to demonstrate to her pupil how the technique is performed. I won't spoil the film but this is a good example of something that comes up often in wuxia and kung fu movies, an extremely powerful master, technique or weapon presents itself and the heroes have to devise a clever solution (the solution might be a counter to the technique, a special device, or a tactic). This was the guiding philosophy with Kung Fu techniques and power levels in wandering heroes of Ogre Gate, explained in this passage: 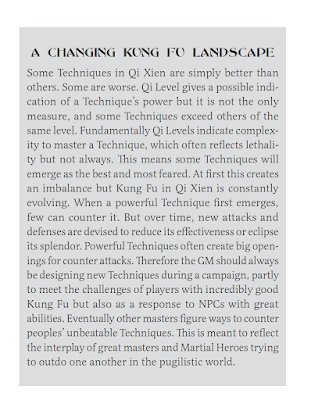 The game leans into the idea of having martial arts that are more powerful than others emerge. Even with techniques in the same Qi Level, there is variety in terms of effectiveness and power. But that effectiveness is only going to help a character for so long, eventually someone devises a devastating counter that makes the technique less safe to use all the time.

The balance can come from the PCs themselves, or the NPCs. It shouldn't happen right away, but if a technique is very good, eventually one should emerge that can contend with it. A good example in the game is Blade of the Dancing Fox. This is one we knew from play testing was quite effective when used well and a lot of players ended up taking it. Eventually in my own campaigns a technique called Swift Reply of the Fox emerged. It specifically counters Blade of the Dancing Fox and does considerable damage when performed successfully. This is a technique that actually appears in the Lady 87 book.

So Wandering Heroes of Ogre Gate (and to a lesser degree Righteous Blood Ruthless Blades) takes an approach to balance that allows for spikes and dips in power. It is a game that embraces a lack of balance on the front end, knowing that this gets corrected organically over time when the Changing Kung Fu landscape approach is fully embraced. It is by design in order to emulate the kinds of movies that inspired the game.