Just wanted to let everyone know that Legends of Ogre Gate, the web novel of the story of Sunan and Bao, has been released on wuxia world. This past week the writer, Deathblade, released the prologue and the first three chapters (It will follow a two-chapter-per-week release schedule). Deathblade is a translator at wuxia world. He has translated several wuxia novels by Gu Long and translates many of their xian xia web novels there as well (including I Shall Seal the Heavens and A Will Eternal).

Check out the main page HERE. 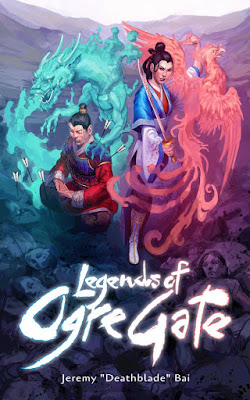 In some tales, Sunan and Bao are heroes. In other tales they are martyrs. In some songs they become gods. In other songs they die horrible deaths. In all stories, they are heroes, lovers, legends. After a thousand years, it can be difficult to separate the myth from the reality, to extract the fact from the fantasy. This is the true story of Sunan and Bao, who became the legends of the Ogre Gate.

Posted by BEDROCK GAMES at 8:51 AM