We just released the fifth Sects of the Martial World book: Maidens of the Jade Blue Sky. This one is a little more on the supernatural side, with an epic artifact and a villain with profound Kung Fu.

It is available in PDF HERE.

BLAZING SWORDS OF THE MARTIAL WORLD 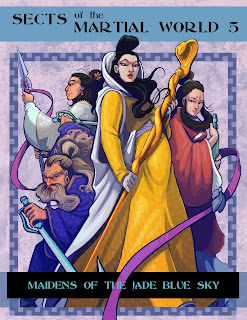 Maidens of the Jade Blue Sky is a new Martial Sect for the Wandering Heroes of Ogre Gate roleplaying game. The Maidens of the Jade Blue Sky roam the land destroying powerful artifacts and dispensing merciful wisdom. They are led by Righteous Maiden, a venerable Martial Hero who witnessed the destruction of Iron Temple and vowed to protect the world from evil. They are opposed by a faction led by her former Disciple, Brother Wolf. The Wolf Faction seeks to control the Life Keeping Stone to save one of their own, while Righteous Maiden seeks its destruction.


This PDF includes stats for members of Maidens of the Jade Blue Sky and Wolf Faction, new Objects of Power, a new type of sword, a new poison and new Kung Fu Techniques. It is designed to be dropped into any campaign as needed.
Posted by BEDROCK GAMES at 9:17 AM