THE RIDERS OF FORTUNE (SERTORIUS) 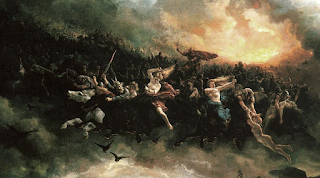 The Riders of Fortune are three identical Sertori sisters who believe themselves sent by the gods to unleash a second Great Anguish and usher in the new age. The sisters roam the land on horseback issuing divine vengeance against all who provoke they wrath (particularly other Sertori). Their true identities have long been lost to the madness that's embraced them, now they are named after the three instruments of the Anguish: Sister Death, Sister Fire and Sister Blood.

The lives of the Riders of Fortune were filled with coincidences too striking to ignore. The chances of three siblings sharing Sertori powers are small, this was the first sign they were destined for greatness. Also by coincidence they each came upon a horse imbued with Sertori-like magic (Monstras) which they now ride. Sister Blood mounts a green scaled steed named Chaos. Sister Death rides a horse with billowing breath named Ash. Sister Fire rides a red Aetic steed named Vengeance. They take such events as signs from the gods that the time is at hand for civilization to collapse once again.

The Three Sisters all have mental and physical afflictions from their magic. Their mental afflictions are a shared Explosive Rage triggered by anything that reminds them of Dosikan's crimes against the gods. Their physical afflictions simply alter their appearances slightly. Sister Blood has red skin with the texture of stone (this also enhances her Hardiness). Sister Fire has bright orange hued eyes that illuminate the darkness. Sister Death has white hair and eyes that are completely black.

They have amassed something of a following as well. Followers and Disciples of the Three Sisters do not travel with them, as they forbid this, but spread news of the coming Anguish.  Occasionally they seek out one of their Disciples to issue proclamations.

Each Sister specializes in a particular kind of mayhem. They like to attack settlements but have learned to exercise caution. Usually Sister Death Strikes First with Plague of Fear, followed by Avalanche of Flame from Sister Fire. Sister Blood protected the group. If Sertori are present, these are usually handled by Sister Fire with Obliterate Magic and Sister Blood (who can use Costly Bargain if she must).

The sisters are mostly identical. Their spells and Emotions are different but they also have minor variations in Defenses and skills (these are noted with parenthesis)

Powers:
Ash: Ash can release a cloud of choking mist that expands to covers an area of about 200 feet. The mist is completely under Ash's control and usually he centers it on the three sisters. It does not affect any of the three sisters or their steeds but anyone else is unable to breath while inside the mist and must make Endurance Rolls each round to avoid passing out and dying (See SUFFOCATION RULES). The TN for this roll is TN 1 + 4 for each round (beginning at TN 1 the first round).

Vengeance: Vengeance can causes the blood of his foes to boil with a simple stare. He must make a Command Roll against the Resolve of a single target. On a success the Target immediately feels hot and begins to perspire. For each round that this effect is maintained, the target takes a cumulative 1d10 points of fire damage.

Chaos: Chaos is able to fly.
Posted by BEDROCK GAMES at 7:54 AM