With so many folks getting ready for Gen Con I think not quite as much attention is being given to RPG blogs (except perhaps those reporting from Gen Con or those more connected to the convention). But since I am not going there myself, I have plenty of time to continue blogging. Given this, I will be taking a much more relaxed approach to blog content until August 3rd. Today, I want to share my family's tomato sauce recipe.

First thing to know is I am a terrible choice as ambassador for our family tomato sauce. My cousin Sammi is a much better cook than me, her father and mother are also excellent cooks, my mother and my aunt too are exceptional at making this. It took me years to even get this to taste anything like my mother and aunt's version.

This recipe comes from my grandfather's sisters, my aunt Lily and my aunt Flora, who I assume learned it from their mother and passed it on to my mom. There are a few different versions of the recipe in the family, this is the one I prefer because it keeps things really simple tasting.

To make this you need: 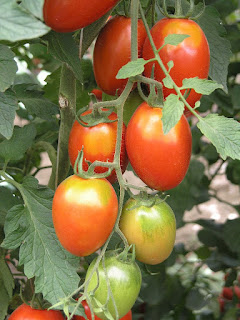 The first step is to brown the meats. For chicken, thighs with the legs are good. For the por,k there are two basic options: we either use a cut of meat (I've done with everything from chops to ribs to loin) or we use a spicy Italian Sausage. These choices create two entirely different sauces. If you go with the Spicy sausage, it is going to be a very flavorful sauce with a bit of heat. It also means you don't need to use as much fennel seed. I've also done this with some beef shoulder, that is an option if you don't like pork. Use any sausage brand you like, my aunt is pretty insistent on Bianco & Sons.

While that is browning you can heat up up the crushed tomatoes on the stove and add in a little bit of olive oil. Bring it to a boil then reduce it to a simmer.

Just brown it a bit in a pan with some oil, but don't let it blacken. Then transfer it into into the simmering tomatoes (you want to make sure it is simmering and not boiling when you make the transfer.

After this there is supposed to be a more orderly procedure but I basically wing it and play it by ear. I let the meat simmer for about three hours (at the least, if you can go for five hours, by all means). But basically this is like making chicken soup, it takes three hours or so for that meat to release its flavors into the sauce. If using sausages you can put those in a bit later if you prefer (I like to let cook them forever). While the meat is cooking you can occasionally put in some olive oil. I am not sure if this does anything or not, but it gives you something to do. I also am not totally clear on how much olive needs to end up in the sauce, but I think it is between a half cup to a cup in total. Also, you want to stir the sauce regularly with a wooden spoon, make sure the meat doesn't burn (keep it from the bottom of the pan). Drop in a bay leave at this point too.

Once the meat has worked its way into the sauce you can start putting in the other ingredients. Some people are wary of putting spices in while cooking, preferring to put them in after it has cooled and been stored, but I like to eat mine immediately so I risk the burn and just try to keep the temp low at this stage (I do wait until the last minute to throw in the herbs though). You need to grate in about a half cup of the cheese (this can be more if you like). Then give it salt and pepper to taste.

After you've done that, put in some crushed red pepper. My family doesn't use much of this, but my wife loves hot spicy food, so I started putting ridiculous amounts of crushed red pepper in. Then put in the fennel seed. This is very individual but it is crucial to the sauce because that is where most of the sweetness comes from. This is not a particularly sweet sauce. We don't use sugar in it. You can add in some shaved carrot to sweeten it further if you wish.

Now you can put in the herbs. My mother never made it with oregano. She claims she is allergic to it, so I just never developed a taste for oregano in this sauce. My uncle disagrees strongly and makes bold use. So if you like oregano feel free to add it in ass well. On the basil, thyme and rosemary mixture, I would advise going light on the basil if you use lots of red crushed pepper and lots of fennel. I like basil, but I find it can overwhelm the fennel flavor or confuse it if you use too much (so be careful if you use tuttorosso tomatoes because they frequently add lots of fresh basil).

A lot of people like to put red wine in sauce. I occasionally do so in other sauces. You can do that if you want, but I think it messes with the flavor in this case.

Serve it with your favorite pasta (I like linguine, angel hair or rigatoni) and with some meat from the sauce itself. If you use angel hair be careful because it is a lot more delicate and will get soupy if you put too much in. I love angel hair, but have learned to be very conservative in my application of sauce with it. If you make use pork sausage in the sauce, I think it goes best with ravioli. Also I have celiac disease so I have to use pasta made from other grains. I've observed some thing here: with corn, rice, potato and quinoa pasta you are always having this choice between texture and flavor. The grains that bring the right lecture seem to add the wrong flavor (which can really destroy things). So experiment. Right now, even though I find it a bit on the gritty side, I go with quinoa-corn or a potato-rice pasta that I like. None of them are as good as wheat pasta though.