GP Adventures has just launched a kickstarter for their Marmoreal Tomb Starter Campaign. It is an expansion of the Marmoreal Tomb Dungeon they introduced in Gygax Magazine Issue 3. I spoke with Benoist Poire (who is the P in GP Adventures) about the kickstarter campaign and the module. I should mention for full disclosure that I am friends with Benoist and have worked with him on projects in the past. 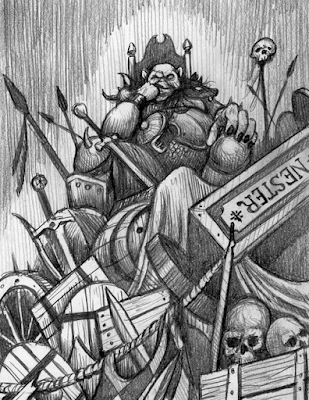 BRENDAN DAVIS: You are in the middle of a kickstarter for The Marmoreal Tomb Campaign Starter; what can people expect to see when it is released? You call it a module but also a campaign starter, can you explain the concept a bit?

BENOIST POIRE: They can expect to see a complete kit to run a campaign in the lands of the Duinnsmere or their own setting, published or homebrew, similar in scope or greater than such classics as T1-4 Temple of Elemental Evil, and based on the design ethics and values of the early Advanced game, circa the Giants series and the like. An open setting of adventure where modules are locales you can plug into your campaign however you want, rather than scripts or story lines you have to plug wholesale to make them work. We're bringing back the "modular" in "module", in fact.

BD: What system does the module use?

BP: We wanted to both deliver the Gygaxian castle and campaign nobody's ever gotten entirely in full, in the original format in which it was supposed to be played, and make the material amenable to people using various editions and variants of the game, even shifting to different genres and role-playing games, including your own Sertorius RPG. The way we do that is by presenting the material as original and authentic as we can get it, using 1st edition compatible rules, and we include guidelines and advice on top of that for GMs using different editions, variants, games and genres. The stretch goals of the campaign get more precise from there, including complete detailed guidelines for use with Sci-Fi and Science Fantasy settings, or with 5th edition, Pathfinder conversions and whatnot.

BD: Why did you decide to launch it as a kickstarter? Did you have any concerns going in?

BP: We had no idea the type of response we were going to get. It was paramount to remain true to our vision and lay it all out for people to see, including the design goals, the maps, the type of artwork we are shooting for and the like. The response has been nothing short of amazing so far! And we are just a few hours in into the campaign. We decided to launch it as a Kickstarter because we could then produce exactly what would fit the demand, and not over- or under-shoot it. We are ambitious with the project, and would like to make it stellar. But you can't do that without the funds to do it and that means that people want it. As far as we can see, there's a thirst for our kind of non-linear, expert crafted approach to adventure settings. I think gamers are tired of the "love letters" and BS. They want gaming that's fun and that delivers, whatever their game of choice, and that's great.

BD: How would you describe your partnership with Ernie?

BP: Ernie is not only my partner, he's my friend. We have a relationship that's unlike any I've had in my life really. We're working great together, we have similar tastes and senses of humor, and yet we're very different, which makes us combine our imaginations and efforts in different ways. The whole is greater than the sum of its parts. That kind of synergy. Ernie's an awesome, deep guy. I'm proud to be both his friend and partner in this adventure.

BD: The first level of the Marmoreal Tomb appeared in the third issue Gygax magazine; will there be any alterations to first level with this release?

BP: We've added two encounter areas in some spots where we thought they might make sense, but the main drive was to continue on what was already done, to push on and add to the experience, rather than redesign the whole from the ground up. So if you have the Marmoreal Tomb's first level from Gygax Magazine, rest assure: the Campaign Starter plugs right into it with no issues. Your Gygax Mag isn't suddenly obsolete.

BD: You describe The Marmoreal Tomb as reflecting the "Lake Geneva Gygaxian play style”, I think most people have an idea of what you mean by this but could explain what that means in terms of gameplay (both on the GM-side and the PC-side)?

BP: The Lake Geneva play style means the way Ernie, and Gary Gygax, and Rob Kuntz, and others run the game. Which at its core is an exploration game, where you manage and mitigate the odds via smart play, where you explore the unknown, where the bulk of the experience of the game is not contained within the page of the rules book, which by the way meshes really well not only with the Original and Advanced versions of the D&D game, but with the 5th edition as well.

BD: This approach seems to have resonated strongly with you personally. Why is it significant to you?

BP: I think it's the core of what attracts me, as far as role-playing is concerned. The ability to say "I want to do this", and not be confronted with a plot or a storyline that tells you you can't to see the GM then trying desperately to keep the game together. That kind of thing just doesn't happen in a Lake Geneva exploration game, because there is the setting, the dungeon or hex map with a key attached to it, right, and no further expectations as to the way the game's going to go. That's what excites me most both as a player and GM. Especially the latter. When players come up with stuff I had not foreseen in a million years. That's when the game gets really interesting. The Marmoreal Tomb explains what the adventure sites are, what they are made of, how inhabitants relate to one another, and the GM takes it from there. If you want to plug it into a plot line of your own making or a published campaign you've been running for a while you can, because there's no conflicting expectation in our products in that regard at least.

BD: Can you describe the setting and its scope? 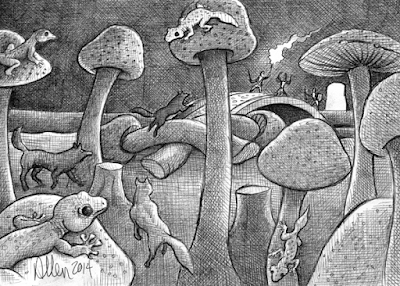 BP: The Marmoreal Tomb is located in an area called the Lower Midlands, which have been left to humanoid populations with no significant human presence for a while. It's not too far from the village included with the Wilderness expansion, Crom Caemloch, a village which can also serve as the home base of the PCs going into the Hobby Shop Dungeon proper. The Viscountcy of Poy has its civilized areas, but these are few and far between. There are multiple types of human ethnicities and cultures mixed into that sandbox, different factions, overt and secret, vying for control in the area, and a sort of diversity that lends choices and options to the PCs that way. The feel is somewhat medieval, kind of like Greyhawk actually, very reminiscent of it and yet not quite the same, inspired on the fiction of people like Poul Anderson, on the Matter of France (Charlemagne) and the Matter of Britain (Arthur), very loosely so. The Swords & Sorcery vibe comes from Howard and Leiber. We tried to emphasize those sources that were left aside from modern D&D and meant something to us, both for Ernest from his original campaign and for me creatively speaking. It all blended into a big soup that is the Duinnsmere, of which the hex map of the Marmoreal Tomb Wilderness Expansion pack is but a starting area.

BD: What is next for GP Adventures LLC?

BP: First we fulfill the Kickstarter. We won't start a second kickstarter until we fulfill the first one. Then we attack the publication of the Hobby Shop Dungeon proper. Then the Gazetteer of the Duinnsmere and the Shades of the Eurth (think multiple material planes in which the geographic area of the lake of the Duinnsmere blends and links them all). Then the Hobby Shop Dungeon part 2. Then more modules like the Marmoreal Tomb. We have a special project to announce after this first kickstarter if it is successful, but it depends a lot on its overall success. We shall see!

You have find the kickstarter here: THE MARMOREAL TOMB CAMPAIGN STARTER KICKSTARTER
Posted by BEDROCK GAMES at 7:39 AM