This campaign is set ten years after a previous set of adventures (HERE). This is the sixth full session of the current campaign (Session VII can be found HERE).


We held a brief interim session to deal handle the details of what happened to the three members of Purple Cavern sect when they went to speak with the Snake Demon, Jia. In session VI (HERE) Long Shu had entered the snake demons lair dressed in her deceased husband's robes. Her husband was a physician named Shun who died decades ago. When she saw him, she believed he was the reincarnation of her husband and that he was fated to find the robe so that they could be rejoined.

At the start of this session Long Shu returned to the lair and asked Jia to come outside and speak with him. He told her that he was happy to have her come along with him and try to be with her but he did not recognize her and did not believe himself to be Shun. Jia seemed unconvinced, finding the similarities between them too striking but agreed to allow him to time to regain his memories of her. She would travel with him to Purple Cavern Sect and try to become a member. 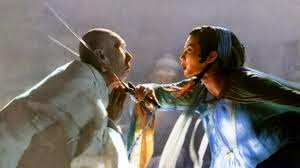 The group headed south to Zun city and learned more about Jia and her history on the way. Lingsu spoke with her about medicine and Kung Fu Techniques, expression interest her Eight Divine Snakes. Since they had about nine days before the rest of the party met them again in Zun, they decided to travel to Je Valley so Min could learn Double Strike Technique from The Gentle Demon.

In Je Valley they exchanged news and Min learned the Technique. They then journeyed back to Zun uneventfully and are now awaiting the arrival of their friends.
Posted by BEDROCK GAMES at 8:35 PM