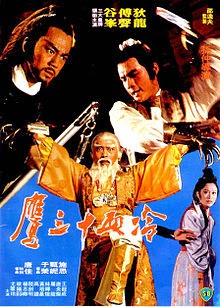 The structure of the The Avenging Eagle is interesting, using several long flashbacks to tell the story of Chik Ming Sing (also known as Rover or as Black Eagle). It begins in the desolate wastes of a frontier, with the main character dying of thirst and hunger. He encounters a man who says his name is Homeless and gives Chik water.

Their friendship is rocky at first but they eventually become close, with Chik Ming Sing revealing that he is wanted by a group called the Iron Boat Gang, having been raised as a killer by their heartless master Yoh Xi Hung. An orphan, Chik Ming Sing never learned to discern right from wrong. The Iron Boat Gang master taught his students to be ruthless and punished them for displays of affection toward each other.

We learn that after the gang tried to heist a shipment of cargo going to Nu Fai Town, Chik Ming Sing was wounded by the hero Golden Spear and forced to flee into the wilderness. There he lost consciousness and was brought to the villa of a man who calls himself Jiang Shun Kwai. Brother Jiang's family nurses Chik Ming Sing back to health and his sister, Siu Fung wins the Iron Boat Gang Disciple's heart. Through her he learns about right and wrong, begins to question his upbringing and wants to become a better man.

His return to Iron Boat Gang does not go smoothly, as Chik Ming Sing fails to wear his iron plaque (which symbolizes his membership in the gang). This infuriates Yoh Xi Hung, who seems to view him as a favorite disciple. Later, Yoh Xi Hung informs him that they have found his nemesis, Wang An. Chik Ming Sing goes with his brothers to kill Wang An and his entire family only to learn that Brother Jiang and Wang An are the same man. He tries to stop the Iron Boat Gang from killing the residence of the villa and attempts to protect Siu Fung, but his brothers overpower him and murder the entire family.

Yoh Xi Hung has him beaten for his insolence, but eventually forgives his disciple once again. However, in his heart Chik Ming Sing is no longer a killer and when they go to the house of Cheuk Yi Fan (another nemesis), once again murdering the entire family, the Iron Boat master forces him to kill Cheuk's pregnant wife. Feeling he has no choice, Chik Ming Sing kills her but silently vows to leave the gang.

The recounting of his past occurs as Chik Ming Sing and Homeless travel together and avoid the Iron Boat Gang, who are tracking him. In between flashbacks they are attacked by groups of Iron Boat disciples, in spectacular and bloody combats. During one such encounter, we get a glimpse of Homeless' true identity when he takes out twin blades and fastens them to his forearms. Cheuk Yi Fan is also known as Double Sleeve Blade: Cheuk Yi Fan. The audience realizes who he is, that Chik Ming Sing has killed Homeless' wife and that homeless is Cheuk Yi Fan questing for vengeance.

However he seems to have softened his view of Chik and appears to forgive him when he reveals the truth about how his wife died. The two team up to fight the Iron Boat Gang and kill its cruel master. First they ambush some of their trackers at an inn. This is a cleverly arranged scene where the heroes force the Innkeeper to rent them the entire building temporarily so they can dress as the staff and ambush their enemies. When the Iron Boat disciples arrive they are taken by surprise and killed one-by-one.

Chik and Cheuk/Homeless decide to attack Yoh Xi Hung together and assault the Iron Boat headquarters. They cut their way through the master's minions and face off against his two chief bodyguards: twins who are each missing an arm and fight together as one with a shield and round saw blade.

When they finally confront Yoh Xi Hung, he tries to turn Chik and Cheuk against each other by offering his disciple forgiveness if he joins with him in the battle. At first this seems to work. Chik abandons his search for redemption and accepts his master's deal. However he changes his mind again mid-fight and helps Cheuk kill Yoh Xi Hung.

After the battle Chik asks Cheuk to take revenge for his wife, but he refuses, saying they are not enemies. However Chik insists saying that Cheuk's wife's spirit will never have peace if he fails to avenge her death. He grabs Cheuk's arms using his blades to commit suicide, effectively forcing him to take revenge. At the need of the film Cheuk stands over his wife's grave and it goes to the end credits.


CRUELTY AND COMPASSION IN THE MARTIAL WORLD

Like Killer Clans and The Last Hurrah For Chivalry, this is a film that focuses on the dark side of the Jianghu. Whereas The Last Hurrah is a celebration of brotherhood and true friendship, The Avenging Eagle highlights the corrupting influence of brotherhood in the form of the Iron Boat Gang. Still it is more optimistic I think than either film because there is a balance of forces. The protagonist belongs to an evil martial sect, but there are clearly lots of good people who populate the setting as well, Wang An and Golden Spear for example. If the viewer feels overwhelmed by the evil and cruelty it is only because we are seeing the world from Chik Ming Sing's point of view.

The Avenging Eagle features one of the meanest, nastiest, most heartfelt villains ever. He raises his students to be devoid of affection for one another but demands absolute loyalty from them and appears to desire genuine filial devotion from his students (when Black Eagle forgets to wear the iron plaque that Yoh Xi Hung made with 'his own two hands' the Iron Boat Chief gets very emotional and clearly takes it personally). There is just a very interesting contradiction in this character.

Ultimately Yoh Xi Hung is the source of evil and of Chik's suffering. Even though Chik has killed his wife and unborn child, Cheuk Yi Fan appears to understand that his actions were a product Yoh Xi Hung's evil. Cheuk is able to have compassion for Chik because he expresses genuine remorse and achieves an understanding of right and wrong (which he didn't possess before).

The swordplay is classic late 70s Hong Kong action. This is the sort that is highly stylized and what I describe as 'blocky and choppy' with staccato movement and frozen poses after each strike. In my view this is pretty impressive fight choreography within that style. One of the great things about The Avenging Eagle is the sheer number of weapons. This gets into Legendary Weapons of China territory with every combatant seeming to wield a different killing tool. There are axes, shield, saw blades, three section whips, iron claws and more.

The fights are all great but for me the Inn sequence and the final battle are worth singling out as exceptional. For the inn this was largely due to the set-up, which was a lot of fun. Wuxia seems to reward cunning plans and this was definitely a good cunning plan. The final confrontation with Yoh Xi Hung had excellent choreography but more than that it really managed to work drama into the fight.

For gaming I think there is some fodder here. It gets into the idea of security companies and shipments begin hijacked by bandits. In my wuxia campaigns those kinds of scenarios are pretty standard. The twist here is rather than protecting the goods, the protagonist is taking them. Yoh Xi Hung would make a top notch villain in any campaign. The Iron Boat Gang by extension would work as well. This is also the kind of film that can help a GM get a sense of the inhabitants of the martial world. You have the contrast of Brother Jiang and his family with the Iron Boat Gang, and that can be useful for populating your map.

What stands out for me is the simplicity of The Avenging Eagle. The flashback structure gives it the illusion of greater complexity but the storyline is beautifully straightforward. Definitely worth checking out.