WUXIA INSPIRATION: THE LEGEND OF THE BLACK SCORPION (THE BANQUET) 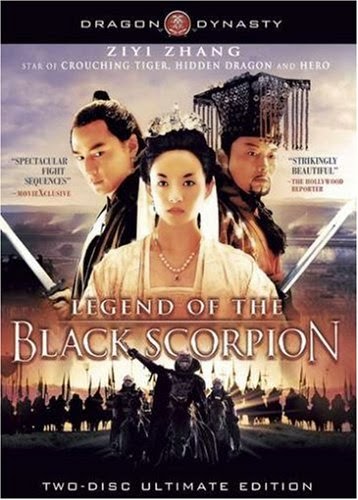 Note: I am writing these as a fan of the genre. I am not a movie expert or an expert in asian cinema. These are my own observations based on what I have learned by watching wuxia and kung fu movies, and by reading about them through interviews and books. But my knowledge is quite limited and I am an English speaker. So understand that my commentary comes from this perspective.
Note: This review contains many spoilers.

The Legend of the Black Scorpion* was released in 2006 (also under the name The Banquet) and was directed by Feng Xiaogang. It stars Zhang Ziyi (Crouching Tiger, Hidden Dragon and House of Flying Daggers), Daniel Wu (Tai Chi Zero), Zhou Xun (Painted Skin, Flying Swords of Dragon Gate Inn and Cloud Atlas), and Ge You (Farewell My Concubine and Sacrifice). The action choreography was done by the great Yuen Woo-ping (Drunken Master, The Matrix, Kung Fu Hustle, Crouching Tiger, Hidden Dragon, Fist of Legend and Kill Bill**).

THE LEGEND OF THE BLACK SCORPION
The storyline for Legend of the Black Scorpion is loosely based on Hamlet. It is set at the end of the Tang Dynasty on the eve of the Five Dynasties and Ten Kingdoms Period.

It begins with a narration that leads into a gorgeous musical pantomime scene in a rural theater amid the wilderness. There we meet the chief protagonist, Prince Wu Luan (Daniel Wu), who has retreated from the world to learn acting and poetry after a losing his love, Little Wan (Zhang Ziyi), when she marries his father, the emperor. The narration informs us that the emperor has just died and his position usurped by prince Wu Luan's uncle Li. Emperor Li (Ge You) marries Empress Wan (formerly Little Wan) to secure his position and dispatches a group of assassins to the the theater to kill his nephew. 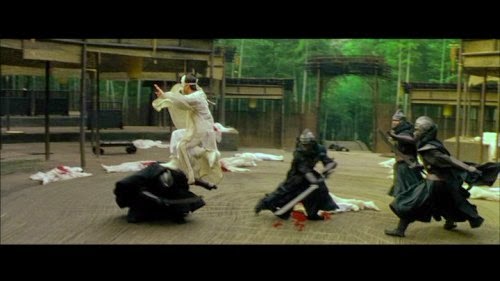 This opening sequence sets the tone for the rest of the film. It alternates between the languid and the abrupt, as the crude and black-armored assassins descend on the ethereal actors who dress in white gowns and masks. One by one they brutally murder the actors, seemingly trying to find the crown Prince. A few of the actors prove difficult to kill, taking out several assassins and on the verge of escape before being impaled or beheaded. This has all the flowing and stylistic choreography you expect from a great wuxia scene but it makes a point of reminding you that blades are designed to cut flesh and stop life. You find yourself getting lost in the beauty of the movement, only to have the spell broken by the crashing reality of dripping blood and snapping bone. The shots don't just show you what happens, they explain what it means to be cut and bleeding.

We are led to believe that Prince Wu Luan dies a few times before we find him hiding below the waters of a nearby river. The film then cuts back to the palace where Emperor Li is trying to seduce Empress Wan. She agrees to consummate their relationship when the emperor agrees not to harm the prince. She also gains the Emperor's trust by leading him to believe he is a greater lover than his brother (something he seems particularly keen on establishing).

Prince Wu Luan returns to the capital and appears in Empress Wan's room wearing his pantomime mask. He has with him his Yue Maiden Sword and a scroll containing a musical verse. He and the Empress spar and she expresses her disappointment that he has acted to take the throne for himself. He then shows her the verse which is about loneliness and loss of love.

Empress Wu goes to visit Qing (Zhou Xun), her lady in waiting and the daughter of Minister Yin. Qing had been engaged to the prince and the two discuss his return to the city, with the Empress' jealousy becoming clear.

The films develops into an involved political drama filled with chess-like moves between the different characters (mainly this is a game between the Emperor and the Empress). We see one particularly brutal execution of a governor who tries to turn the court against the new Emperor in favor of Empress Wan by indirectly calling him a usurper. This execution very much encapsulates the tone of the film, where it is violence beautifully displayed mindful of its consequences.

Eventually Prince Wu Luan learns that his father was poisoned by his uncle and at the Empress' coronation he puts on a play illustrating how the deed was done. In an effort to eliminate his nephew as a threat, the Emperor says he is impressed with the performance and feels it is time for him to take on more responsibilities, so he sends him to be the ambassador to the Khitans. In reality this is a hostage exchange with each side giving a prince to the other. However the Emperor knows that the Khitans have sent him a nameless beggar and plans to have Wu Luan killed before he reaches his destination.

The Empress takes Minister Yin's daughter Qing and uses her to convince the son (who is a general) to save Wu Luan and help fake his death. This effectively forces them to aid her in a a plot to kill the emperor (because they are her accomplices in the deceit).

Upon hearing news of Wu Luan's death, the emperor says he will hold a banquet the following day. His prime minister informs him the day is inauspicious but the emperor insists.

At the banquet the Empress attempts to poison the Emperor by lacing her own cup and giving him a toast. However she is interrupted by Qing who, believing Wu Luan is dead, offers to give a dance performance in the prince's honor. The emperor seems touched by the gesture and offers her to drink from his toasting cup, which she accepts. After performing the dance, she falls to the ground and dies (from the Emperor's poisoned cup), with all knowing the Empress has just attempted to kill the Emperor.

In the chaos, Wu Luan returns and says he wants revenge for his father. Initially the king protects himself with his bodyguards, but when the prince says he wants a duel and doesn't want to kill any innocents, he lets him through and willingly drinks from the poison cup on his own.

The Empress approaches Wu Luan and tries to declare him the new ruler, but he is reluctant.

Qing's brother, who is enraged over her death flies over the crowd with a knife and attempts to stab the Empress. Prince Wu Luan grabs the blade with his hand to stop the attack but Qing's brother says it is poisoned. The Empress then stabs the brother in the throat and Wu Luan dies.

After the coronation we see Empress Wan clutching a red sheet and reflecting on her rise to power. She remembers that she used to be called Little Wan and asks how she forget. The Yue Maiden sword flies into her back and through her heart. She clutches at it as someone else pulls it from he body. We never see the attacker but we see the look of confused recognition on her face before she dies.

Surprisingly, when I first watched this it took me a while to realize it was essentially Hamlet. Once I did of course, I pretty much knew everyone's fate. I found the familiarity of the storyline refreshing because normally wuxia films are taken from sources not available in English or (occasionally) available in translation. 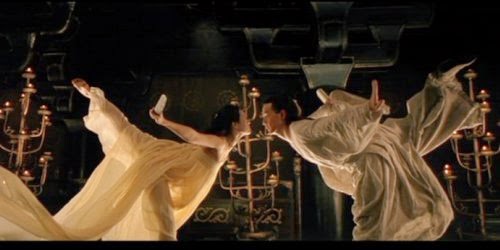 The Legend of the Black Scorpion is interesting, it blends imperial drama with wuxia and achieves a nice balance of ruthless grittiness and poetic swordplay. That may sound like a natural fit but I don't think I have seen many movies that blur the line so effortlessly between blunt stabbing violence and the more dreamlike and flowing fight choreography you see in movies like Hero. There was a sharp internal contrast where one moment you have a hero effortlessly dodging dozens of sword strikes in soundless steps, only to have him impaled. This film is both soft and sharp. Sometimes the action is gentle and serene, other times you can hear the harsh crunch of bone and rasping gurgle of blood. I found this quite striking.

While the movie isn't packed with fights, it has plenty given the story. Each one is riveting in its own way and multi-layered. You are not just getting action in these sequences, you are getting little stories.

The movie is a bit graphic at times. There are beheadings, impalements, and many shots intended to make the viewer cringe. There is also a somewhat confusing rape scene. I didn't think I could explain it adequately in the overview, but I mention it here because it may trouble some viewers if the decide to watch The Legend of the Black Scorpion.


The acting is marvelous and the use of the Hamlet storyline works very well. Ge You is highly effective as the scheming and lusty emperor, while Zhang Ziyu brings the complicated character of Empress Wan/Little Wan to life. Zhou Xun and Daniel Wu give great performances also. Xun gets a lot less screen time than the main actors but stands out as always. Wu handles the fight choreography smoothly and plays a convincing lead.

In terms of gaming there may be something her for more political campaigns. It really shows the chess-like nature of dialogue in the imperial court and a GM could make good use of that. Other than that it isn't quite as good in terms of gaming inspiration, though the forest theater at the beginning of the movie might prove an interesting locale.

I highly recommend this movie for anyone likes wuxia. I was struggling to find the right words to describe the action, but it really is some of the more compelling stuff I've seen.


*The Chinese Title is Ye Yan
** Additional fight choreography credits also include Fearless, The Grandmaster, Forbidden Kingdom and many more.

Posted by BEDROCK GAMES at 6:05 PM