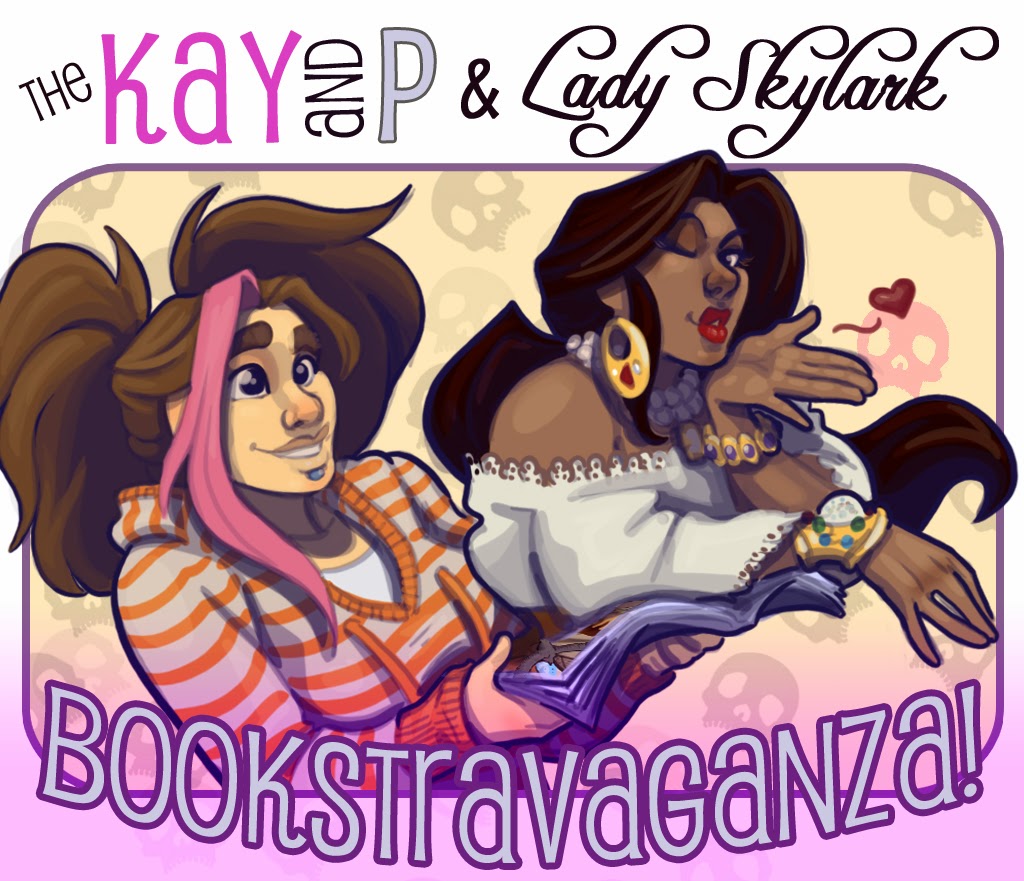 I recently spoke with illustrator Jackie Musto, creator of Kay and P and The Adventures of Lady Skylark, about her upcoming kickstarter. Jackie is also responsible for most of the interiors in a number of our own products from Bedrock Games (including Servants of Gaius, Sertorius and the upcoming Wandering Heroes of Ogre Gate).

Jackie's Kickstarter, the Bookstravanganze, is aimed to support a print release for her Lady Skylark and Key and P comics. You can find the kickstarter here: BOOKSTRAVAGANZA

Brendan Davis: Tell me about the Bookstravaganza Kickstarter. Why did you decide to do a Kickstarter for this project? 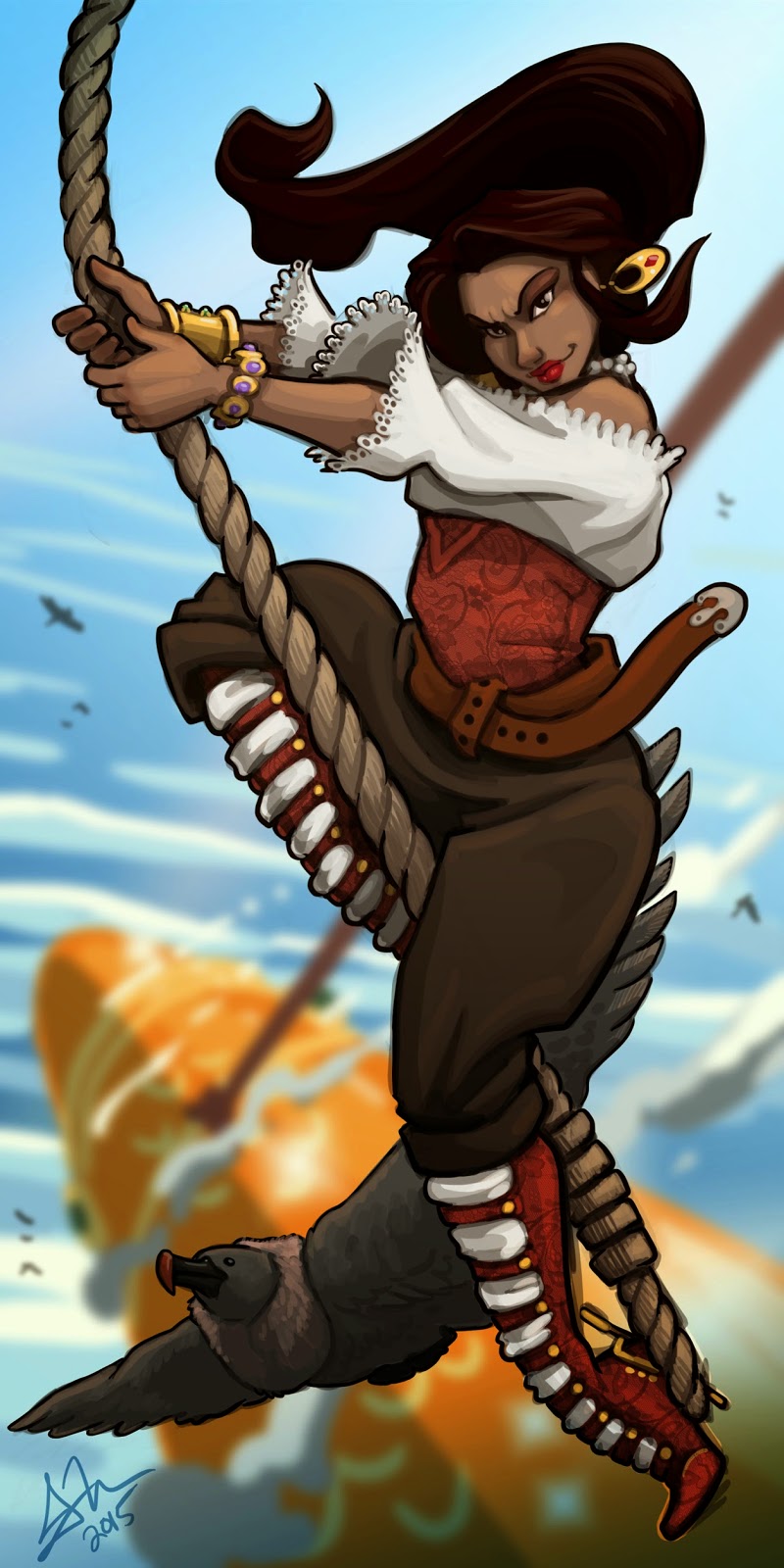 Jackie Musto: I've actually used Kickstarter a couple times before for smaller projects, and they turned out really well! Usually when a new book is coming out, I set it up as kind of a "pre-ordering" system. Since the artwork is completely done before I start the campaign, there is less worry or risk involved for backers—they know they're going to get their product. This project is actually even more important than the previous ones too—I self publish and that is very costly when it comes to printing color. Usually, I can only order a small amount of books so when I sell them, I really only make enough back to cover the book. My printer has offered me a sweetheart deal though, and since I have a whopping five books to print if I order a large amount of them they'll cut me a better deal. This means I can finally offer them in bookstores, which is a really big deal. Kickstarter is great for this because it allows me to reach a pretty grand audience and offer some cool extras like buttons, stickers and t-shirts.

BD: Lady Skylark is steampunk pirate adventure while Kay and P is more modern with a dose of the supernatural and heavy focus on characters. Why these two genres and how do you manage doing two separate comics?

JM: Well I super love fantasy in all its forms. It should come as surprise to no-one that I've been an avid gamer since I was about twelve years old, and often made up elaborate stories for my toys going on adventures before that. The modern fantasy of "Kay and P" evolved out of wondering what it might be like to have a magical best friend, and then how you'd try and deal with that. Sometimes I'd be trying to get on a crowded bus and wonder: "If I had an invisible friend, how could I get them on here?" or something like that. It was fun to puzzle the logistics of it. 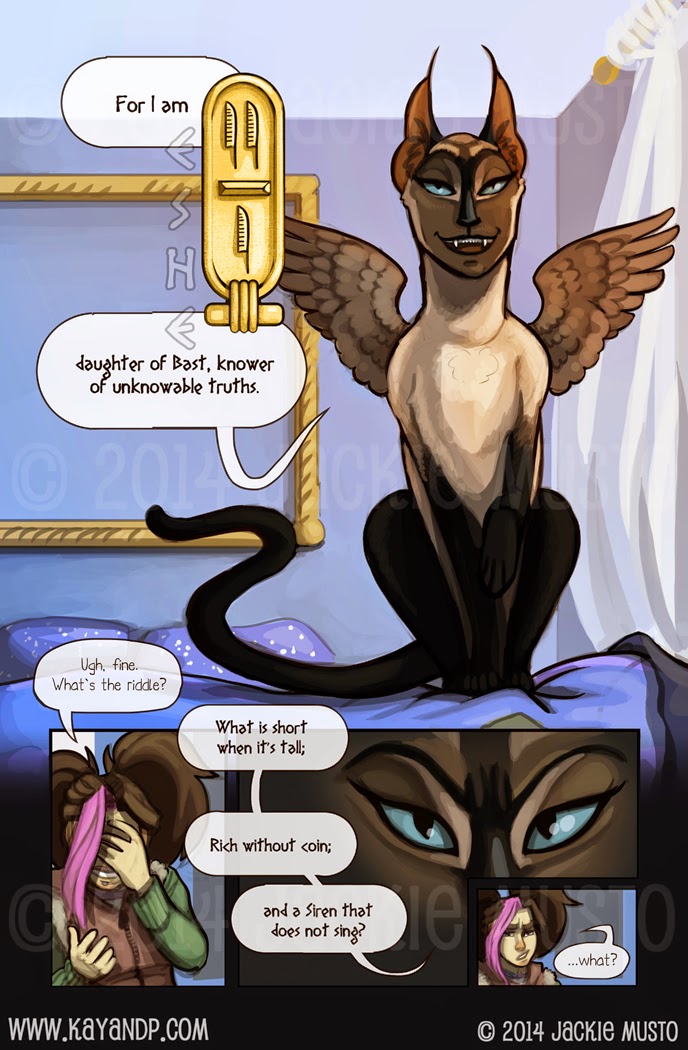 I think that it's also interesting to have these kind of weird creatures that have real lives as well. Just because you're an animal person or a minotaur doesn't mean you don't have to work!

On the flip side of that, Lady Skylark is heavier into the fantastical side of things. There is straight-up alchemy magic, flying ships and giant sky beasts. It's actually a really nice contrast to have a heavy action sequence in comparison to the often more subdued modern setting. I think steampunk is a really interesting "what-if" scenario as well. I really dig Shadowrun and cyber-punk as well, so finding out there was a historical version instead of a sci-fi version was pretty neat.

As far as how I manage—ha, lots of coffee! Really, it's planning and scheduling. Once I got quite quick at my technique, it was easier to estimate how much time I was going to need per page and schedule around it. I can't stress enough to aspiring comic artists out there to really sketch out your panel layouts and script and such way in advance so you can foresee any problems ahead before it's too late!

BD: What is your writing process for the story lines? The art? 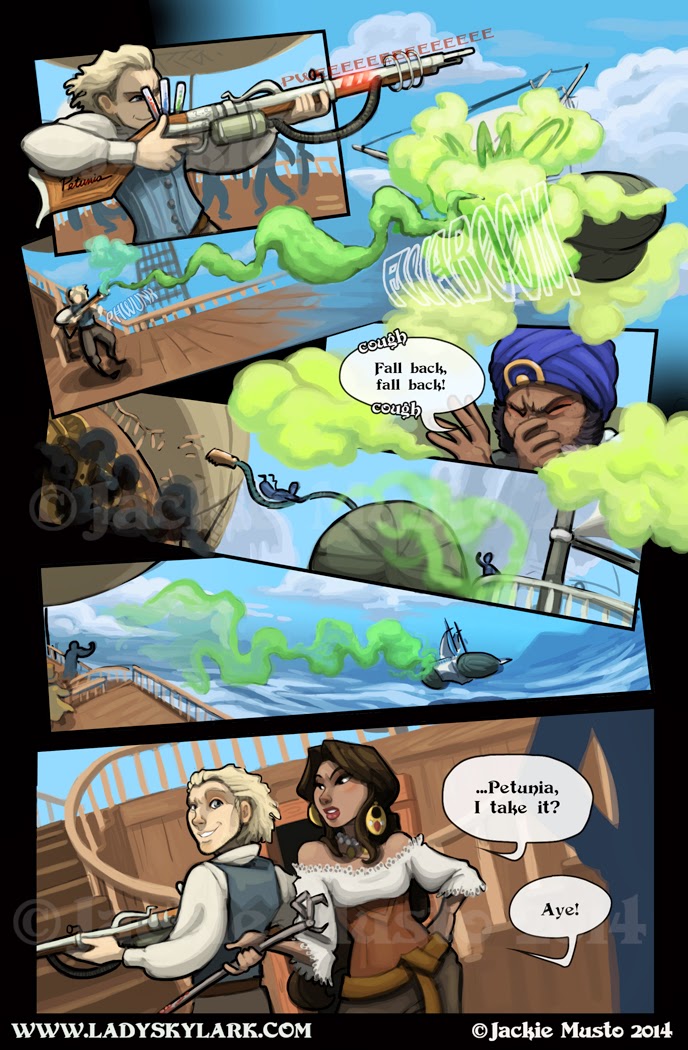 JM: When I'm writing Kay and P, I think of it as episodic. Each issue of a comic is around 32 pages, so that's what I place a story arc in. I begin by drafting an outline of what I want to happen in an issue, often referring back to the giant whole-story timeline I have and what scenes or characters will be there. Then I break that outline down in specific actions or details in each part, and then edit! It's important to realize sometimes stuff can't fit and needs to be cut for time, or isn't required to move the story along. It's very valuable to spend sometime working the scene and characters before as well (figuring out the room layout, what a character is going to wear, and of course sketches of new characters). I then work the paneling and script in tandem. I layout a thumbnail of each spread of pages (so I know what the left and right pages will look like next to each other) and start scripting underneath. I write out the scene, actions and dialogue. Above, I loosely pen in the frames of the panels, and sketches of the contents of these panels (including the speech bubbles). When I'm satisfied with the sketch, I move onto the computer and draw directly there — I find it really easy to manipulate the art and move things around if I need. Once I'm in the computer, it's surprisingly like a traditional comic: I pencil, ink, color and add the text. Lady Skylark is a little different as I am following a script in that one, but otherwise the process is rather similar.

BD: How long does it take you to develop each issue?

JM: From concept to finished pages, I've ground it down to about three weeks (though not all in a row). I spend a couple days on outline and sketching, then I can handle about two pages a day if I'm on a roll. It actually takes a lot longer for it to come out than it takes to produce. Kay and P updates twice weekly and Lady Skylark on the weekend.

BD: Who are your biggest influences? 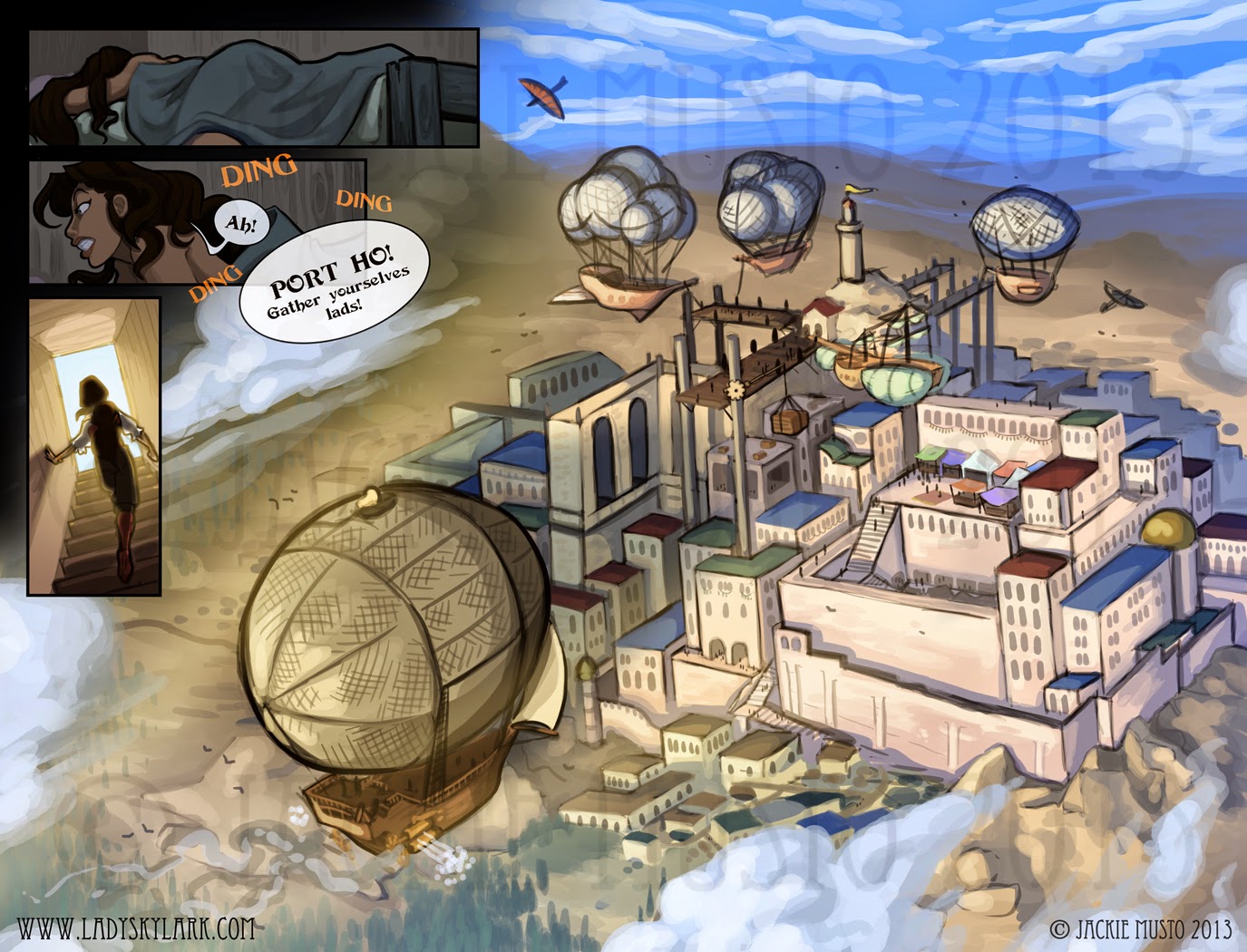 JM: It's a weird list, but: Alphonse Mucha, Rankin & Bass, Jim Henson, and a lot of the wonderful female contemporary indie comic artists out there. I'd name them all, but we'd be here all day. I think it's important as an artist to take a look around and see what is being made along side you. Get inspired by their awesome skill and determination—it can help when you're feeling a little stuck or down yourself. I grew up with tons of fantasy as well, so I am sure that has really shaped how my ideas form and what I think is interesting.

BD:  One of the things I appreciate about your work (particularly in the Lady Skylark Series) is how alive your characters seem. Their personalities glow and are visible to the reader. I am curious how you approach giving this kind of life to lines on a page. 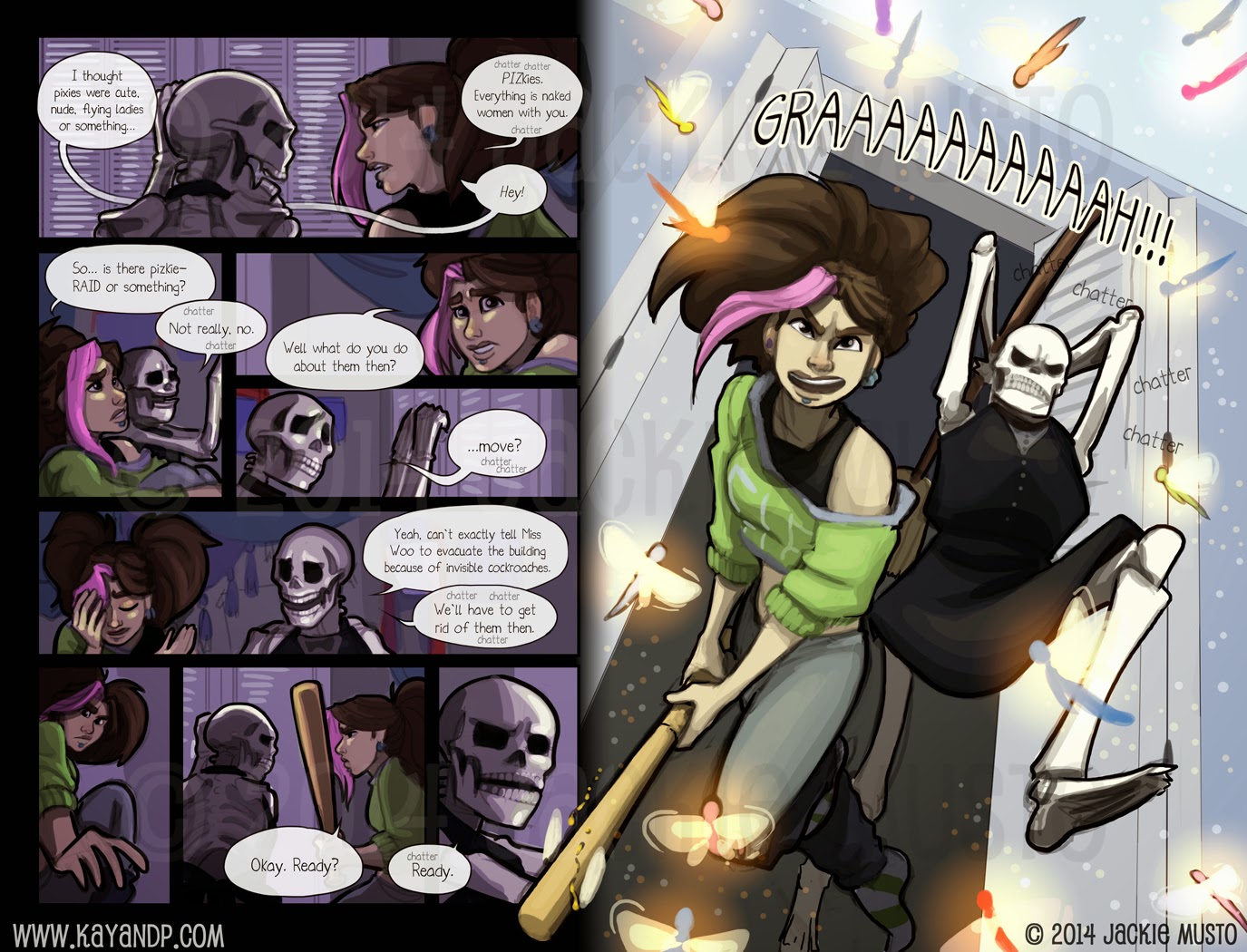 JM: I'm going to spill one of my true secrets here: I have a mirror next to my desk and I make faces into it all day long. Seriously! Whenever I need a face, I make it so I can see what it looks like. In addition to that, I once had a drama teacher who told me: "In life, you are volume 5. On stage, you're 11!", meaning that you almost want to over-act a little if you want your message to come across to an audience way out there. Subtle movements can be lost, so a big facial expression or movement is super helpful. I also thank my love of animation— if you pay really close attention to the masters, they make shrink and stretch do magic. The gesture of a form moving is really what makes it exciting - if you make all your characters look like they are on coat hangers, it's not quite as fun!