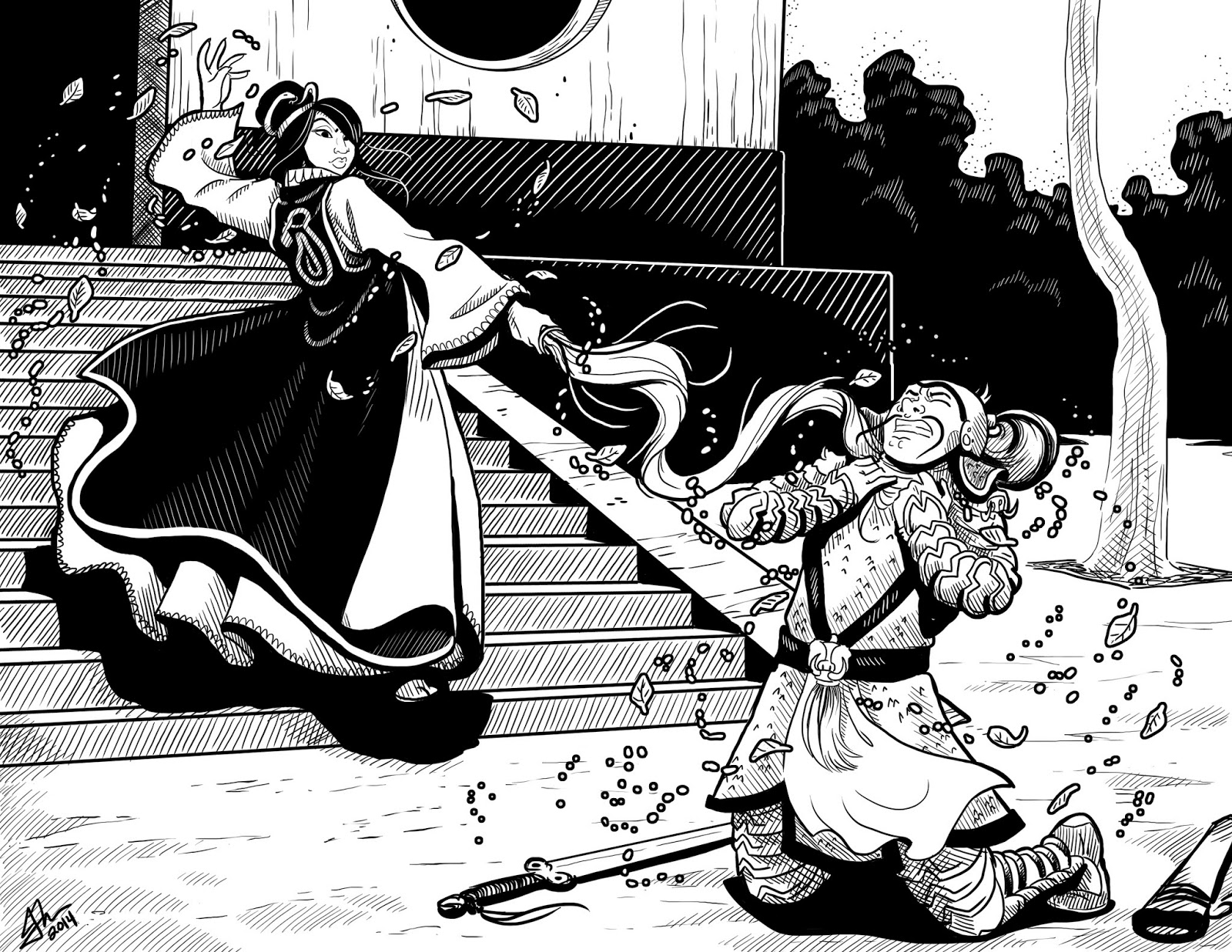 Martial Arts are always tricky in RPGs. It can be difficult to give players enough options without making the game overly complex. At the end of the day, the designers have to make a tough choice between the desire for simplicity and the need for mechanics that reflect the wide range of techniques in martial arts action movies. There are a few ways to o this, and I don't think any of them are better or worse, simply different. My favorite martial arts rules are probably the ones from Hong Kong Action Theater! But I like some of the other approaches I have seen used. For example here is something to be said for example for a streamlined and simple approach that lets Players and GMs paint vivid actions using a relatively small set of choices. In the end, with Wandering Heroes of Ogre Gate, we decided to create individual Kung Fu Techniques because we felt that best reflected the Wuxia genre but it also made combat more entertaining. Normally I shy away from these sorts of combat mechanics, but in the case of martial arts, I think they are well suited to the task.

This raises the issue of complexity. More techniques mean you have more information to juggle and more moving parts. We tried to balance this by making individual Kung Fu Technique entries concise and avoiding complexity where possible elsewhere in the system. For me this hits the right note and produces gameplay that feels like something out of a wuxia film. Characters start with 6 Kung Fu Techniques and learn more as they advance. There are also Techniques called counters that allow you to interrupt, evade or attack when someone strikes. A character might leap into combat and unleash Fluttering Kicks against an opponent, only to have her attack countered by the Hidden Fist of Yanshi.

One of the key elements of the game is you must learn Kung Fu Techniques from a source, such as a Master or a Manual. It is also possible to develop your very own techniques, though this takes time and hard work. You advance by defeating opponents who are more skilled than you. This is a system that rewards taking the initiative.

Here are the two Kung Fu Techniques from the above example:

You leap toward your foe, unleashing a rapid patter of kicks to the chest that drive him back.

Make a Leg Strike Skill roll against your opponent’s Parry. On a Success you deliver 3d10 open damage with your kicks and drive your opponent back 5 feet per rank of Waijia

Cathartic: The kicks do 6d10 Open Damage to your target and drive him back 10 feet per rank of Waijia (you must press forward in a straight line to drive the foe in this manner).

This potent counter allows you to interrupt any melee attack with a sudden punch to the throat.

Can only be used Cathatically when someone uses a Melee attack with weapons that have No Reach.

Catharsis: You deliver a stunning blow to your opponent’s throat that does 5 automatic wounds and stuns them for one round. It is not effective against foes with greater Qi than you.

The above are fairly mundane, if potent, attacks. The general isn't limited to kicking, punching and stabbing though. We also wanted to emulate some of the more fantastic attacks, like these:

You jump into the air and strike the ground with your hands and forehead, releasing a circular blast of energy.

On success, you release a brief burst of ring-shaped energy that strikes everyone around you within five feet of your body. It does 1d10 damage per Qi level.

Catharsis: The ring emanates from you in a circular pattern, striking everyone around you within 10 feet per rank of Neigong.

You lean your body back in a nearly impossible arch as flaming energy releases from your chest and arcs in multiple directions, striking those you desire.

Catharsis: You can strike 3 targets per rank of Qi, and damage increases to 3d10 fire damage.

But in wuxia characters can also defy gravity using Lightness Kung Fu, so we included a class of Techniques for this as well:

Using this technique, you bound and walk upon trees and branches with ease.

On a success you can move freely through trees for a number of rounds equal to your Qinggong Rank. This allows you to walk, climb, and run on even the smallest tree branch. Move your full rate.

Catharsis: This allows you to blend in completely with the tree, giving you 10 Stealth for 30 seconds per rank of Qinggong.

You can take fly through the air like a bird.

On a success you can fly 100 feet plus 10 feet per level of Qi per round. Must use each round to stay in flight.

Catharsis: This enables you to maintain flight without additional skill rolls for 10 minutes per rank of Qinggong.

Rituals are another feature of the game. This is a skill that has existed in the Network System since Servants of Gaius, however we have made an important change in Wandering Heroes of Ogre Gate. Ritual is now an open skill, meaning each time you take it, you take ranks in a specific Ritual. This can be anything from Ancestor Veneration to Talisman Creation to Calling Forth a Spirit General to wage war against Ghosts. Every day Rituals are safe, but the more potent ones come with some risk. This is a system we are continuing to develop and we are trying to base it heavily on real world accounts from the Song Dynasty period.

Here are some examples of Rituals from the book:


Ritual of the Boundless Perfection (TN 8): The name of this ritual is perhaps an overstatement, but its existence is rumored among certain Yen-Li practitioners. This is dark magic, and comes with a higher risk than most rituals. To perform it is actually quite simple, the caster makes a food offering to a particular kind of Gui spirit, and promises to temporarily trade places. The effect is the user transforms into a Gui for1d10 hour, while the Gui gains control of the caster’s body. In additional to the normal consequences of casting such a spell, the user invites some amount of danger by making the transformation. Once a Gui has returned to physical form, it is reluctant to give it up and they have been known to seek ways of making the transformation permanent.

Sword Ritual of Bao (TN 6): This Ritual can be performed to channel the spirit of Bao and wage battle against demons and spirits. This requires use of an altar dedicated to Bao (or both Sunan and Bao). The user must make an appropriate offering and cleanse a sword, then enter a trance and achieve union with the mind of Bao. This also requires a successful Meditation Roll (TN 6). This takes approximately ten minutes. Once this is achieved, then the performer of the Ritual is able to fight with the grace and power of Bao, channeling her Qi to fend off demons and spirits. The effect lasts for one hour, during which time the caster gains a +2d10 to his or her Medium Melee skill, and also inflicts 2 automatic wounds against Demons and Spirits on any successful attack.

Wandering Heroes of Ogre Gate will come stocked with may Kung Fu Techniques and Rituals but we want to encourage players and gamemasters to make their own as well. The genre benefits a lot from creating a growing canon in the campaign. The ability of the GM to introduce new techniques and new manuals is very important.