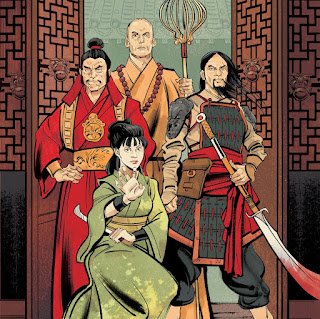 It was a pleasant surprise to learn that Righteous Blood, Ruthless Blades won a Judges Spotlight award at the ENNIES. I am very proud of the work we did on this game. It was a pleasure to to work with Jeremy, and an honor to be hired by Osprey (I've long admired their books). It was also great working with everyone involved.

The goal was to make an RPG that reflected the dark wuxia stories and movies that Jeremy and I had a shared interest in. We tried to make a wuxia RPG that allowed for the tense standoffs, the eccentric characters, the ingenious weapons and devices and the dangerous martial worlds you find in movies like The Bride with White Hair or books like Heroes Shed No Tears.

The spark of the project for me was the chemistry Jeremy and I had. We were both inspired by wuxia but took very different paths (he mastered the language, moved to China and translated wuxia and xianxia, whereas I got into martial arts and watched hundreds of movies). But we agreed we liked the dark and gritty films, usually inspired by Gu Long stories, which we both loved. It was wonderful to build a martial world that felt grounded in the sensibilities of films like Magic Blade or Killer Constable. And seeing that realized as a beautiful hardcover book that captured the grit and glamor of such movies was a delight for both of us.

I can't speak for Jeremy, but I fell in love with wuxia for deeply personal reason, and my goal initially when I set out to make wuxia RPGs was to bring attention to the genre and provide another set of tools for fans of the genre to run at the table (the quest for the perfect wuxia RPG is always endless because we all have our own take on it). I hope people like what we did with Righteous Blood, Ruthless Blades and am very happy to hear someone at the ENNIES thought we were worthy of a Judges Spotlight. 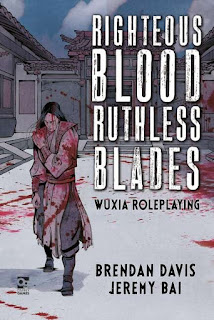 Posted by BEDROCK GAMES at 8:49 PM