This is a log for my ongoing Disposable Disciples of Bone Kingdom campaign. You can see the previous session HERE.  Note that I began recording sessions, so this has allowed me to do more detailed session logs.

LI FAN
At the Golden Way headquarters Shen Chun had just finished speaking with Da Mei Mei on the subject of the sect's reputation. He was informed that Iron Clawed Lion King and Beggar Wong were both waiting to speak with him.

Iron Clawed Lion King bowed in respect and told Shen Chun that he came because he wanted help Shen Chun rise to the top of the martial world. He said they shared an enemy in Kang, who had killed his daughter with the help of Zhi Zhu. He wanted revenge and would pledge his support if Shen Chun helped him obtain it. 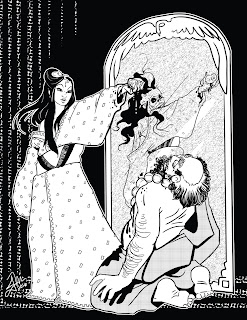 They talked, and Shen Chun told him that he still had important matters to deal with regarding Kang, but would consider it. He also pointed out that Kang seemed to be on the verge of retiring from the Martial World. Iron Clawed Lion King dismissed this as Kang just being eccentric but expressed satisfaction with the meeting and when he left it seemed their organizations would find common ground in the coming months.

When he was done speaking with Iron Clawed Lion King, Beggar Wong entered and began prodding around his hall.

"You had asked about Little Red Mantis and his allies?" Beggar Wong asked.

"I heard they went south."

Shen Chun then summoned Xiaomin and when she arrived he said "A while ago we were trying to find her father. Do you have a name for me?"

Beggar Wong walked over and whispered "Ping Wu" in his ear. "And the mother is Wu Gaolin, a nun at Purple Lotus Temple."

"Is this well known?"

"Most people of high standing in my sect are aware of it."

Shen Chun told Beggar Wong to ask the chef for whatever he liked and dismissed him.

"I have the information you asked for but must know your intentions," Shen Chun said to Xiaomin.

"I intend to kill my father."

"What about your mother?"

"I have not given much thought to my mother."

Shen Chun nodded and said "Who your father is could cause problems for us if you take revenge but I will leave it up to you. Your father is Ping Wu."

"I would like twenty days to handle this matter on my own and then I will return."

SOUTH OF HAI'AN
Min, Ong, Qui, White-Browed Tiger and Jagged Blade went with the Buffalo Men to the City of the Spiral Crown. Once in the city they planned their attack. They decided to have Qui go with the Buffalo Men and Jagged Blade to cause a disturbance at the front gate, while the rest of the group would take the hidden exit Min found earlier. Both groups decided to synchronize their actions.

Qui approached the front gate and saw two Ogre Demons at the front gate, with many others inside the courtyard. He told the buffalo men and Jagged Blade to stay out of view in an alley. Qui then moved toward the gate as if drunk and started banging on the gate with a cup. One of the Ogre Demons walked over and said "What do you think you are doing?"

"Just enjoying the courtyard; any problem?"

The Ogre Demon went to prod him with a spear, but he swiftly backed away and said "Hey are you trying to stick me with your pole?"

"Your not allowed here."

"Can you answer a question for me?"

"I heard the Queen is a demon and I have never seen a demon, so maybe you could show me demonic items."

The Ogre Demon charged toward Qui and chased him through the streets. Qui ducked to where his friends were and his men surrounded the Ogre Demon as soon as it came into view.

Qui said "Drop your weapon and surrender, it isn't worth dying for."

The Ogre Demon threw his spear to the ground and they tied him up, then knocked him out with a few solid blows to the head.

Qui went back to the gate to do the same thing, but found that another Ogre Demon had taken the post of the one he'd drawn out.

As soon as they saw him, they gave chase, forcing him to flee. Once again he lead them toward the alley and had his men surround them. However when he told them to surrender, they refused. One of them released a terrible whining sound.

Qui and his men battled with the Ogre Demons. The buffalo men charged forward and attempted to gore them. They divided into two groups, each taking one of the Ogre Demons on and digging their horns into them.

The Ogre Demons speared one of the buffalo men. Jagged Blade then cut down the more heavily wounded Ogre Demon.

Qui swung his sword at the remaining Ogre Demon and missed but the Buffalo Men brought it down with their horns.


When Qui went back to the gate to continue his method of drawing out the guards, he saw a wave of Ogre Demons marching out of the entrance toward him. He ran with his men into the city bringing the Ogre Demons on a chase as they tried to loop back toward the entrance where two more Ogre Demons had taken up the post. He and his men engaged the Ogre Demons in a massive brawl.

The Ogres got up and the party charged forward. Ong used Lashing Tiger and wrapped the Ogre Demons with his Chain Whip.

Min used Blazing Hands of Hen-Shi on her hook swords and struck them, causing their flesh to burn. One of the Ogre Demons dropped dead. White-Browed Tiger then used his orb, reciting a sutra and drawing the Ogre Demon into it.

He held the orb aloft and it swirled with purple and red mist, but also sparked with electric energy, causing hairline cracks to form on its surface.

Back at the entrance Qui and his men tried to attack their way through the guards. Qui struck at two with the Flaming Dao of Propriety, bursting through their armor and scorching their flesh.

The Ogre Demons responded by striking at Qui, their attack was like ice striking flame, and his Qi energy bled from his body.

Min, Ong and White-Browed Tiger then dug through the rubble to find their way into the palace. Min and Ong snuck into the Queen's reception hall where they found a row of Ogre Demons standing before her and a cluster of officials trying to hold the main door shut against an inevitable onslaught. They snuck back down and informed White-Browed Tiger of the situation.

From outside, Qui and his men witnessed the destruction.

Rubble poured down into the prison chamber where Ong, Min and White-Browed Tiger were. From the dust, the queen rose up into the sky, her form was enormous and wholly skeletal.

The party and the Buffalo Men approached her. Ong said "Queen Su Qian, you are herby relieved of your throne and I am commanded to kill you on the orders of Granny Ox Tail."

Her eyes burned red with fire and she said "Do you think that just because you destroyed my palace you can end my reign?"

"I am a servant of Gushan."

"He is the weakest god of all," She replied.

As they stepped forward to attack she launched ribs at them like massive spears, impaling Ong.

Min unleashed a a blasting Qi breath causing the Ogre Demon guards to smash against the stones.

Ong used hands of the Ox Tail, forming heavy blades on his forearms, and cut through several of the Queen's ribs.

The Buffalo Men and Qui charged forward bringing down the remaining guards at the entrance. Qui made his way to the Queen and struck her with his Jade Valley Fist. As the energy of his attack swirled around her, she launched a rib at him which he dodged.

Min launched at the Queen with Blade of the Dancing Fox, cutting through her rib cage.

Ong grabbed the quee with his Chain Whip and White-Browed Tiger held up his orb and recited the sutras, drawing her into it.

Ong shouted for the king, who stumbled from the rubble and said "Please spare me, I was enchanted!"

Ong then beat the king to death.

Posted by BEDROCK GAMES at 3:51 PM