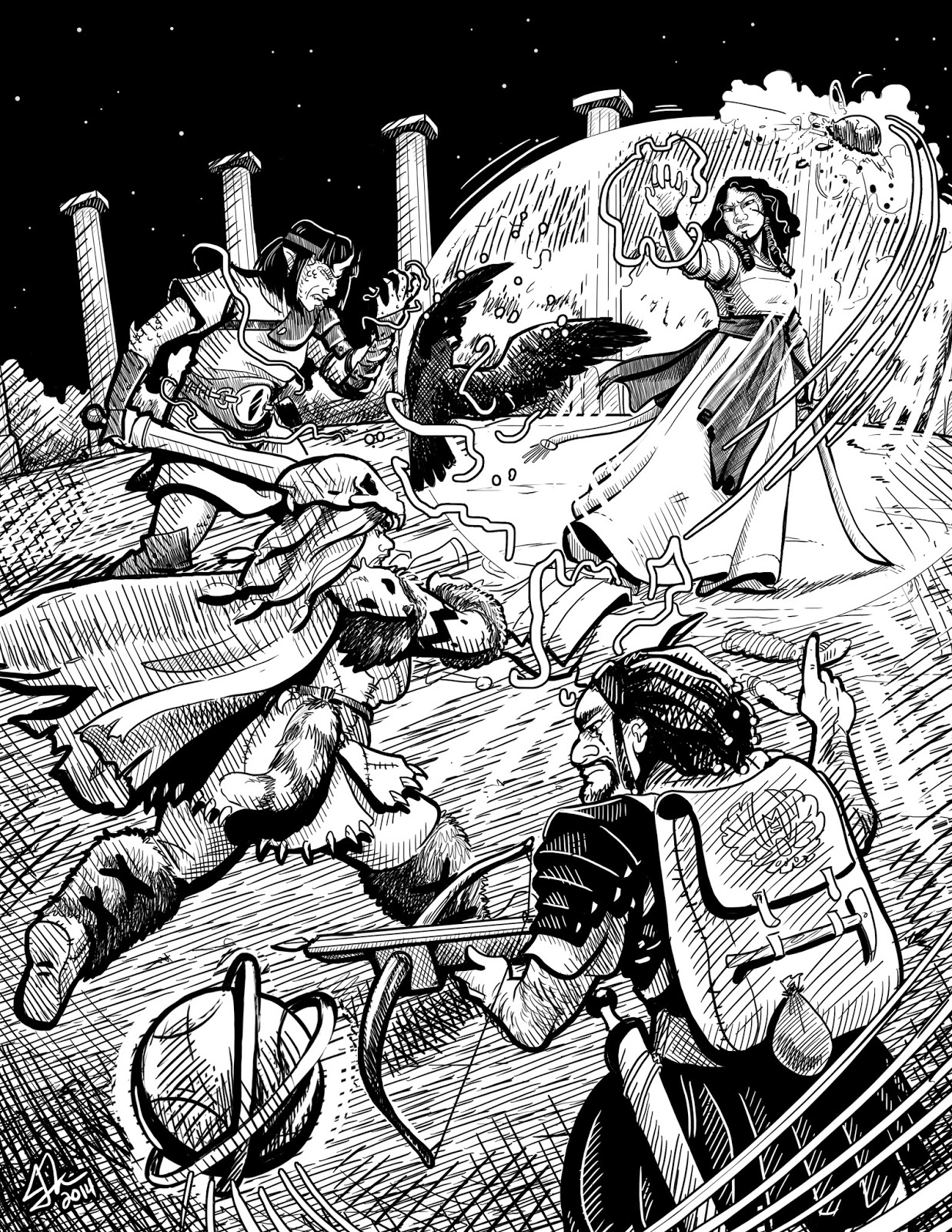 BOOK OF THE ARCHON
I just want to bring people up to speed on our spell supplement for Sertorius, Book of the Archon. We have just about finished with the edits (I basically just need to review some alterations). Hopefully we will have it ready by the summer time (when Wandering Heroes goes to the editor). It will be either free or pay-what-you-want.

I have to say I am really impressed with the Book of the Archon content. This is an entirely different style than the spells in the core rule book. We had a little more creative freedom and that helped a lot.

Here is what you can expect in terms of the chapters for Wandering Heroes of Ogre Gate:

CHAPTER ONE: CHARACTER CREATION
This covers all the basics of character creation and includes our skill entries.

CHAPTER TWO: RULES
This explains all the rules of Wandering Heroes of Ogre Gate. In the past we usually place this chapter deeper in the book. This time around we are trying something different, seeing if making it an earlier chapter is helpful to people.

CHAPTER THREE: KUNG FU TECHNIQUES
This is a very important chapter in the rule book, it describes all of the Kung Fu Techniques. I still have to do a final tally because we've added many since our last count but we have roughly between 160-200 Kung Fu Techniques. This chapter will also be released into the public domain, making hacks and third party supplements easier (because it can be really helpful to repeat the text from techniques in NPC entries in adventures).

CHAPTER FOUR: RITUALS
This is a smaller chapter that expands the Ritual skill and offers up some sample magical rituals.

CHAPTER FIVE: EQUIPMENT
Chapter Five provides all the weapons and daily goods you expect in a wuxia campaign.

Each sect entry explains the history, hierarchy, rules, techniques, etc. In addition to the above list we also have gangs and smaller sects described in single paragraph entries at the end of the chapter.

CHAPTER SEVEN: THE WORLD OF QI XIEN-HISTORY, RELIGION, CUSTOMS, COSMOLOGY
This includes all the cultural information for the world of Qi Xien. We are debating moving some of the material specific to the martial world into Chapter Six, but for right now, that is going to be here. Here you will find the history, religions, deities, key customs, etc.

CHAPTER EIGHT: PEOPLE AND PLACES
This is our gazetteer chapter. It begins with a broad overview of the setting itself, describing all the various powers and important people. Following this is a thorough gazetteer of the Banyan Region. Our sample Wuxia Dungeon "The Tomb of the Timeless Master" is in this chapter.

CHAPTER NINE: NON-PLAYER CHARACTERS
This is a very large chapter that includes many of the key sect leaders as well as important characters in the setting.

CHAPTER ELEVEN: MANUALS AND OBJECTS OF POWER
Manuals are a very important feature of Wandering Heroes of Ogre Gate and this includes several. It also has a number of special items (sometimes magical, other times simply important).

CHAPTER TWELVE: THE GAME MASTER
The game master chapter. Here we go into fate (very important in the setting), grudges, etc. Includes information on designing adventures and running the Kung Technique system. We also provide a list of inspirational sources.

CHAPTER THIRTEEN: GHOSTS FROM THE ASHES


This is our sample adventure, a mystery involving the mysterious death of a local official in Chen.