SWORDS OF THE NORTH PART VIII: THE DEATH OF ULOFF

This is a report of the eighth session of our Vaaran Kingdoms Sertorius session. You can see session seven HERE.

The party:
Gaius: A Ronian-blooded aristocrat
Caela: An Orc soldier from Caelum
Garoff: A Gru Bounty Hunter
Dreckergael: A human hunter who casts spells randomly when wounded
Tauq: A human tribesmen from the march between Palus and Apprea, serving in the house of Alu-Bora under Archon Emmanuel

This session resumed mid-battle from the previous. The party had just killed Nutesh in the caverns of the blood cult and faced a beast made of dead Sertori.

Tauq had already fallen, and when the beast unleashed another wave of crackling bolts, Garoff passed out and Dreckergael transformed into a badger. The beast lifted Caela up to throw her down the hole but she grabbed onto the edge (with a successful Athletics roll). It towered at the edge of the hole and tried to pry Caela's hands from the rim. Gaius and Uloff failed in their attacks, the beast was simply too powerful for them. In desperation Uloff  charged the beast but missed and fell through the hole. In his long descent he cast Juggernaut and plowed his body with great force into the foundation of the structure. This killed Uloff but also caused enough of a quake that the beast lost its balance and fell through the hole as well.

The party recovered. Once Tauq awoke he started to heal the rest of the group. However he overcast and acquired afflictions, becoming obsessed with Uloff's remains Garoff flew down into the chasm to retrieve Uloff's body. There he found his dead friend but saw no sign of the beast.

Garoff read the bones to see if Sur Vanker might resurrect his friend. The reading was hazy but he was optimistic. Later he made another reading which was more clear. He saw the fate of himself and Uloff intertwine with the Gru chieftain Dorgel (who is trying to take the neighboring kingdom of Appraea).

They spent several days traveling back to the Ser-Vel. Upon arrival the party introduced Caela and learned from Vaela that King Hanno-Kar was having talks with the ruler of Beora (who could supply him with 16,000 troops). Word came back from Eshmunazar that he would join with the Ser-Vel on three conditions. First he wanted Sul Worship permitted in Palus and temples erected to Sul in the cities. Second, he wanted to expand his holdings south. Third, he wants the title Malika Alu-Hakdara wa Varholta, this title would make him King of Hakdar-Kane and Varholta. The party was able to talk him into taking the title Emir instead of Malik. 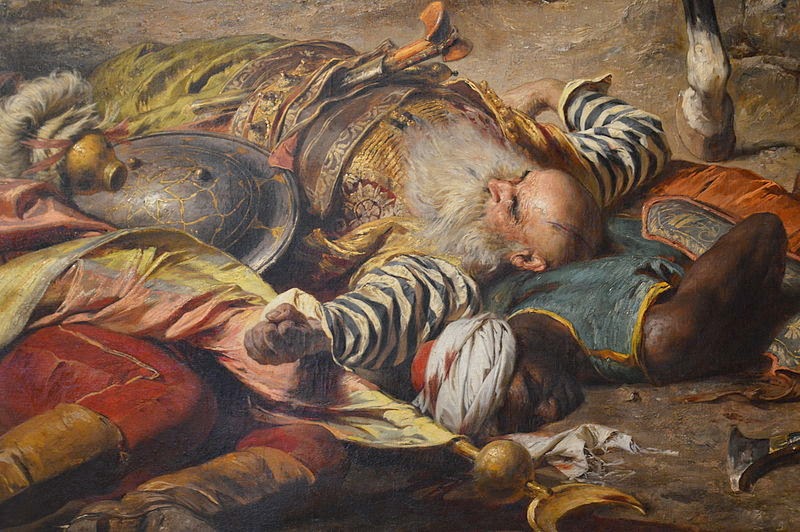 The party then convinced the brownies who live nearby to take messages through the ethereal realm to a member of the Qadia (a group of ministers who control the church of Ramos in Palus) who was hostile to the Gesarians. Using the Brownies saved time, which they were beginning to lose. They also sent a letter to King Mossedes of Beora, offering Gaius' hand in marriage to his daughter if he supported their cause.

Through these efforts they were able to secure a meeting with Iqra, a minister in the Qadia hostile to the Gesarians. The party was convinced that Gesara was angering Ramos with her campaign against the Sertori and felt if Iqra read the entrails publicly this would convince many in the Qadia to support them. They also spoke with him about turning one of King Hanno-Kar's generals. They settled upon a plan and agreed on steps they wanted Iqra to take in 8 days, at which point they would attack the city.

Gaius, Dreckergael, Tauq and Caela went to Hakdar-Kane to speak with Eshmunazar and coordinate an attack, while Garoff worked with Belga to spread their southern forces in a line and send for reinforcements from the north. The body of Uloff was still with the body at the insistence of Tauq.

Eshmunazar agreed to their plan and when the armies converged on Port-Sul they learned it was in the midst of a bloody conflict with King Hanno-Kar controlling one side of the city and the forces allied with Iqra controlling another. Eshmunazar attacked the eastern wall of the city, which was still controlled by King Hanno-Kar, to draw his forces, while Uloff and Belga took their forces through the northern gates which were controlled by their new allies. Iqra had indeed secured one of King Hanno-Kar's generals and their forces outnumbered the Gesarians considerably. They surged over the bridges dividing the city and drove the king's army back into the palace. From here the end was clear, so the party offered King Hanno-Kar his life if he killed Gesara and had her head sent to their camp. They heard screeching of monstrous creatures from inside the palace and the clash of steel. Moments later, a servant brought a box with Gesara's head and the king surrendered.
Posted by BEDROCK GAMES at 7:47 PM