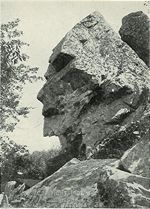 A year ago, around October I started working on a game tentatively titled Strange Tales New England. It was based on some rough ideas I had been fine tuning the previous two years or so. I had a lot of material but wasn't really sure what direction to go until I visited a number of local historical sites with macabre origins. That and a combination of the books I was reading and movies I was viewing, lead to a clearer picture of something gameable that I felt enthusiastic about writing. I designed the core rules in a few weeks and we started playtesting right away. We've been playtesting the game for the past year now, usually once or twice a week. With each playtest I've made adjustments to the rules, revised some of the concepts, and streamlined the material. I've also begun many of the preproduction steps of publishing the rulebook. For example the maps are all done.

It uses the same core system as Strange Tales of Songling, but updated for a modern setting. I also revised a few bits here and there, but the games are essentially compatible.

THE KEYS OF HADES CAMPAIGN

This weekend I started a new longterm campaign. The rules are largely made for shorter campaigns, like Strange Tales of Songling, or for one shots. But I am testing a 30 adventure campaign structure as well. This will be about 33 adventures, each one in a monster-of-the-week format.

There were four player characters for the Keys of Hades Campaign: Noah (an Expert), Terri (a combatant), Milton (a Spirit Medium) and Alex (A Charlatan). Like Strange Tales of Songling, this game is based around character paths. The only Path not represented in this party is the Exorcist.

The party is centered around Alex, a wealthy backpacker whose parents have hired the other players as his friends and bodyguards to keep him out of trouble in his travels. Alex is somewhat arrogant and clueless, and needs other people around to protect him. In session zero, it was decided they had gone to the Blood Forest of Lancaster and had an encounter with the ghost of Old Man Blood. This piqued their curiosity in the supernatural so they decided to venture to The Bridgewater Triangle for his next hiking trip.

The way this setting works is I populate the New England map with a number of sites, giving each one a short entry. So I have the basics of the Bridgewater Triangle, including some supernatural threats in the area. But about ten minutes before we start play, I quickly assemble details to give the location more of an adventure structure tailored to the particular party of characters we are using. I usually rely on methods like scanning local papers for ideas and names, and will often rely on things like a series of murders having just occurred, so there is something for the players to investigate if they want. A lot of it though is very freeform. I react to what the players do, and will lean in that direction.

So for this session I decided that the Witches of Freetown had committed three ritual murders prior to the players arrival in the area. I then scanned papers for names and businesses and used those to put together a list of murders, locations, and members of the Freetown coven. Details were just rough sketch but three murders, one person bashed in the head with a golf club, the others stabbed. A car had been filmed by security footage leaving one of the locations, a tape deck at another. This is basically what I do minutes before each adventure once I know where the players are going to go:

Alex and his 'friends' were not intending to investigate the murders, but they had a passing curiosity in them. So this was more like a day trip to explore the Hockomock Swamp and maybe ask people about the recent killings. Not an investigation, but entertainment. They were tourists passing through.

The party drove first to the Raynham (pronounced "rā-num") Police Station. Alex asked for information about the murders, in particular he wanted to know the license number of the car that had been on the scene and the song playing on the tape player found at another. He was initially rebuffed but pulled a 'do you know who I am!?' and was allowed to speak with the chief of police. Again he was told that information was part of an ongoing investigation, but Alex persisted and even threatened the chief with political fallout because of his parents high standing (again he is a charlatan). Convinced his job was in jeopardy the chief shared the details.

He told the chief he planned to do a day of hiking in the swamp, and was advised against doing so because the killers might still be active in the area. Alex ignored the warning and took his group to the Hockomock Swamp.

They noticed a police car trailing them as they headed up route 138, but decided to pay it no attention. Their journey into the swamp was uneventful at first, but after about an hour they saw a person approaching them through the trees. The individual did not respond to their calls when they asked who was approaching. Instead the person groaned and ambled towards them. A figure, rotting, soon appeared, dressed in tattered attire from the 1890s, but shoeless. Assuming it was a zombie they began firing gunshots at its head, but this had no effect. Terri cut off its arm but she was soon grabbed and squeezed suffering an internal injury. Soon two police officers appears (from the car that had been following them) and told them they had to use fire to kill it. One of the cops was armed with a blowtorch and began using it on the creature.

The fight went on a for a bit, resulting in the cop with the blowtorch being bitten in the leg and bleeding to death (they tried to save him but failed their medicine rolls). The other cop called an ambulance for Terri, who was brought to an area hospital, but told the group he had to arrest them, saying they had been instructed not to enter the swamp and that they were responsible for the death of the other officer.

Alex objected and asked if he could call his lawyer, which he was allowed to do. His lawyer said he would be at the station in fifteen minutes and that Alex should just do what they asked until he arrived. So the rest of the group was placed under arrest and brought to the station.

His lawyer got him out, though Alex was warned to go back to the North Shore by the chief. That night they picked up Terri at the hospital who told them a nurse had clipped her toenails. This detail troubled Noah and Milton, who were beginning to suspect many of the locals. They had been researching the clues they found as well and discovered that one of the victims was killed by a putter and that the license number of the car at the scene of the other murder was owned by the son-in-law of James Cleary (who owned a local mini-golf course).

The next day they discovered Terri had visibly aged, by 12 years, and it seemed was continuing to age with every hour. Convinced it was connected to the hospital and the toenails, they were able to identify the nurse who clipped Terri's toenails, a woman named Myrna, and find her address by going to the hospital website and showing Terri the pictures of personnel until she could identify her. That night they went to Myrna's house.

They found Myrna sleeping with her husband, awakened them at gunpoint and demanded that Myrna end the effects of the spell. She brought them down to her basement where she showed them a satanic pentagram made from seashells, and the nail clippings in a bowline shell in the center. They were able to end the spell but Myrna said the aging could not be reversed.

Alex told her a lie, in order to extract more information willingly, that he was the head of a powerful coven who used magic based on computer algorithms (he described them as using the algorithm to find magic that worked). He then used his Chicanery ability to make it seem that Terri's aging had been reversed. The Chicanery ability is basically just a way for the charlatan to deceive people and act like they are performing real feats of magic. But there is always a small chance that they accidentally tap into powers they don't understand and cause real effect. In this case, he caused her aging to reverse because he inadvertently cast a real spell.

The result was that Myrna believed him and she showed him her grimoire, John Selee's Book of Spells. She then told him that she belonged to a group of witches who served the spirit of John Selee and his two children, Thankful and Nathan, as a kind of perverted trinity. John Selee was an 18th century miller and wizard who used magic to summon imps to power his mill at night. She claimed he haunted the Hockomock but after being told about Alex's superior magic she begged to enter his coven.

Posted by BEDROCK GAMES at 4:03 PM