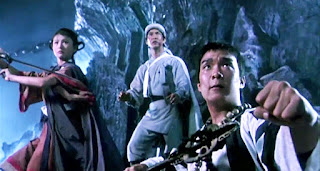 I am posting all that I have written for Profound Masters of Ogre Gate on the blog. You can see the first entry HERE.

This chapter contained the new celestial weapons and objects of power. A few of these will appear in the Lady Eighty Seven book.

This is a dark wooden Jian sword, finely crafed, lacquered and etched with the characters for Bear Demon on the blade. It is light and fast and filled with the intelligence of a man who was driven mad and transformed into a Bear Demon by the beauty of a great martial hero named Merciful Shade.

The Sword can levitate, fly and attack on its own. It can also be wielded by anyone it deems worthy. To wield it one must be a woman and resemble Merciful Shade. Bear Demon Sword always seeks to protect its wielder and in the hands of the actual Merciful Shade delivers 1 Extra wound on a strike when she has been wounded (but only if she is actually holding it).

Bear Demon Sword is light and strong, being more sturdy than a normal piece of wood its size (this is a product of the Demon it contains). If damaged it must be repaired to restore its integrity. It can only be harmed by Kung Fu Techniques or other Qi based attacks and magic.

THE CELESTIAL PILLARS OF NORTHERN AND SOUTHERN SKIES

This ancient Ding Vessel can restore a dead body to life provided their dragon spirit is intact and they have at least 1 Phoenix Spirit remaining. To use it, one must perform an Activation Ritual. This causes a mist to swirl inside the vessel with pours into the body of the target and brings them back to life in an hour. However there is a cost, the person immediately takes a Demon Flaw.

ICE SWORD OF THE ZUN

This is an Ox Tail Dao with a blue hilt and handle carved into the shape of whirling ice. The blade itself is smooth and mirror like. It is buried in ice in the Tomb of the Earthly Queen. Anyone who unearths it, becomes its wielder for life. It has several striking abilities. First it always returns to its wielders. If the blade is lost or stolen, within an hour it evaporates into mist and reforms in the hand of the wielder. Second it bestows enhances how others perceive the wielder. To their eyes the wielder looks more handsome or beautiful than before. There is no change in appearance, but they simply see the person in a different light. This bestows a +1d10 to any Persuade, Command or Deception roll. Finally on a total success, the sword causes people to freeze for 1d10 minutes if they fail an Endurance TN 7 roll.

This bian is made of pure gold and has the words “Life Taker” etched on its side. It bestows a +1d10 accuracy Bonus (which completely replaces the -1d10 penalty most Bian’s have). On a successful attack it drains 1 Hardiness in addition to normal damage. It stores this energy in the whip itself, and if one uses activation, unleashes it in a brilliant blast that does 1d10 Open Damage per rank of Hardiness absorbed (to a max of 10d10) against all in an 80 foot area. Simply roll yourActivation against the Evade of all potential targets (including allies). However it is very heavy, requiring 3 Ranks in muscle to lift. It once belonged to the found of Zun Shan, but was lost in the battle for the pillars.

This two-wheeled cart carries an enormous camphor wood box topped with a metal figurine of Supreme Judge Yu pointing forward. The figure connects to a series of gears within the box that and rotates the figure always pointing in the direction of the nearest demon. Anytime a demon comes within 300 feet of the carriate, the figure rotates wildly. Eventually it stops rotating after about an hour, once it becomes familiar with the demon in question (it can distinguish between good and bad demons and will stop pointing toward demons it comes to regard as righteous or kind). Below the gears is a compartment with a door fitted with an ox-head seal. This can only be opened by the current owner of the carriage. The compartment itself  would seem on the outside to offer only about two square feet of space, but  on the inside it leads to a three roomed hall in a courtyard house surrounding a pristine garden. In the past this was only a single room in the hall, but it has slowly expanded to encompass an entire residence.

RING OF THE KINGFISHER

This golden ring is in the shape of a long Kingfisher with a serpentine body that wraps around the finger of the wearer. Its eyes are fitted with dark emeralds and the feathers are made of jade.

The ring gives the wearer control of any bird demon or bird spirit. To use it, he or she simply makes a command roll against the demon. If it succeeds the creature must obey.

This translucent purple veil was once a normal Veil of Clarity from the Hen-Shi Sect in Li Fan. These allow users to see the righteousness or evil of another person, enabling them to know the Karma Rating of any individual they look at through the veil. A member of the sect named Sentimental Ogre, left the sect because he believed they were twisting Hen-Shi’s teachings. Before he left, Hen-Shi sent him a vision of the truth, that Hen-Shi sect was too harsh in its pursuit of justice. At the same time, she imbued some of her power into his Veil of Clarity, granting it greater abilities.

In addition to seeing the standard karmic value of the person, it also shows the person as Hen Shi sees their righteousness. The better their standing with Hen-Shi (even if they have a bad Karma Rating) the more luminous and immortal they appear. The lower their standing the more demonic and twisted their features seem to be. Regardless of the appearance, the veil imparts true understanding of the spiritual well-being of the person with both The Enlightened Goddess and Hen-Shi, as well as their Karma Rating.

This massive blade can only be wielded by someone with 4 Ranks in Muscle. The hilt is wrapped in green leather and the large, curved blade has a slightly red tint. It functions like a Guan Dao, except it for damage it does Muscle+4 and afflicts targets with Burning Plague (see WANDERING HEROES OF OGRE GATE rulebook).

These are physical objects, usually stones or pearls, imbued with the power of a god, great

master or other entity. Like Celestial Weapons they can be absorbed into the body of character.

However characters of any Qi level may attempt to absorb them. They bestow tremendous

power but also exert the force of their personality on the user. Some even threaten the stability

of the person’s internal organs.

Influence is the Social Skill (Command, Deception, or Persuade) that the stone uses to control

Blood Stones, once absorbed, require the user to make regular mediation rolls (the frequency is

determined by its cultivation Rating). Therefore every stone has a Meditation TN. Users who fail

to make this roll are then subject to being controlled by the stone.

After a failed Meditation Roll, the stone can roll its Influence against the user’s relevant

Defense Rating. For Influence the Stone uses either its Command, Persuade or Deception

(whichever is higher). If it succeeds it takes control of the person for a day or until some

external means of control is used.

Every Blood Stone has a Cultivation rating ranging from 7-24. If a user’s Qi rating is above this

number, then they must make Meditation Rolls once a week or whenever they activate the

stone’s powers directly to avoid being exposed to its influence. If a user’s Qi rating is below this

number, then they must make a roll every day or whenever they use the Stone’s powers

directly to avoid being exposed to its influence.

This looks like a twisted piece of pumice speckled with flecks of ruby and jade. Anyone who

absorbs it, feels a raging glow inside their body and will find themselves given to outbursts of

violence should it take control of them.

then committed suicide after he discovered the plotted his ruin. Accounts vary but according to

large sum of money given by a rival. The Blood Stone burns with Ba’s passion for revenge.

The effect of the blood stone is quite simple but potent. The user is strengthened by Ba’s anger

and rage, flowing with red Qi energy that enables him to bypass any counter equal to or lower

than his own Qi rank.

*Appears in the upcoming Lady Eighty Seven book (note that the entry may be very different in the official release and information here would be superseded by that).

Posted by BEDROCK GAMES at 9:58 AM