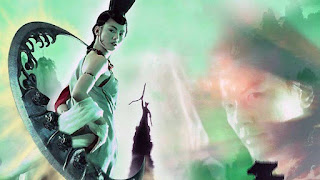 This is an ongoing effort to post the Profound Master Material I have on the blog (you can see the first entry HERE). I will be posting the new profound techniques in a separate entry (as there are quite a number). These are many of the other new options for profound and immortal characters. This session is one of the less complete sections of the book. I had wanted more immortal powers, but mostly I wanted to greatly expand the Demon Hero Powers and the Greater Demon Flaw entries. These will at least give a sense of the direction we were heading with them.

In most taken these can only be taken by profound or immortal characters.

You know about the imperial bureaucracy of the Enlightened Goddess (which deities oversee what areas of specialization, what formalities and punishments are the norm, etc).

You are familiar with the profound sects, demon sects and immortal sects.

You know about the lower realms such as Emo Chung or The Hanging Valley of the Dead.

You know about the upper realms such as Infinite Sky Realm.

NEW IMMORTAL POWERS
These are additional options for characters to take when they gain Immortal Powers.

Bring Lightning and Hail: You can call forth a powerful storm that produces large chunks of hail and lightning, which lasts for 1 day. The storm is enough to flood flood-prone areas. Nothing terribly devastating but it will cause rising water levels near rivers). It also presents the threat of Lightning and hail to anyone without shelter.  Everyone in the open must make a Survival Roll for every hour they spend in the storm. If they fail, roll 1d10 against their Evade. On a Success, they suffer 4d10 damage from hail. On a Total Success they suffer 6d10 Open Damage from lightning.

Incredible Speed: You are faster than others and can move in with stunning speed. You gain a +2d10 Bonus to your Speed Score and your movement is multiplied by 10.

The Profound Exchange: This powerful technique is forbidden to all Immortals, only Demon Heroes attempt it. With this ability one can change the very fabric of reality itself. It cannot alter the past but it can open up new possibilities in the future, making what was once impossible or unlikely, possible or likely. However it requires a heavy price equal to the value of the possibility it opens (whether or not it succeeds).

Splinter: You can split yourself into multiple duplicates. When you do this, you can divide yourself up into 4 duplicates or copies per Qi rank you possess. However your Max wounds are distributed evenly among your duplicates. Any duplicate that is destroyed turns to vapor.

These are acquired any time you gain a Demon Hero Power.

Your skin, if it hasn’t already, grows pallid, and dark lines crawl from your eyes. In the presence of Sunlight your skin burns taking 4d10 Open Damage every minute.

A celestial sparrow rises from your cupped hands. As it ascends higher into the air the flap of its wings grow stronger and stronger pushing your enemies or objects away from you and directing them where you will.

The celestial sparrow creates a mighty wind that increases each round and pushes back your foes considerable distance.  This does no damage but can move and potentially trap them.  This works against all objects and beings within twenty feet of the direction you are facing.  This ritual expends 4 Qi to activate. Sustaining it each round costs 1 additional Qi.

The winds power and effect increases every round. It starts a strength of 1d10 and increases by an additional 1d10 every round. Roll this against the Evade of your targets and if it succeeds, they are 10 feet in any direction of your choice. It you get a Total Success you may entrap them against an obstacle and render them prone. You can move them an additional 10 feet for every round you sustain the effect.

You funnel your Qi into a book bringing forth its elements into reality for a short period of time.  This drains 7 Qi and lasts for ten minutes (every additional Qi rank you put into the effort increases this by 10 more minutes). If the attempt fails, you lose control of the elements. They do not necessarily attack you but remain true to their nature as described in the source material.

You must physically have the book to bring the elements to life. They are not illusions, but tangible and potential dangerous to those around you if they are not fully under your control. The user must specify the passage he or she is attempting to extract into reality.

In order to do this, one must first Tattoo an image of the desired Shadow Guardian using the Talent (Tattooing) Skill TN 6. If this is successful you can then you can perform the Shadow Tattoo Ritual, imbuing the tattoo with a permanent protective guardian that can be summoned through use of either the Supreme Activation or Activation Rituals.

Over time many Shadow Guardians develop their own personalities and quirks. In very rare cases, they have slowly gained greater intelligence and even human-like form over many years.

When Activated the Guardian appears for a length of time specified by type and takes on the form of a shadow. It cannot be touched or harmed in any way, and its ability to communicate with people is limited to gestures and animal sounds.

Eagle: A giant shadow eagle appears, capable of carrying up to four full sized human in flight for up to a day. It appears the moment the ritual is performed and can also attack with its beak (Speed/Fly: 3d10, Attack: 2d10, Damage: 4d10).

Water Dragon: This shadowy creature can carry up to 15 people on its back for up to a day and take them across bodies of water. It can also create a bubble of air to take riders below the water surface safely. Its Swim Skill is 5d10.

Tiger: A twisted shadow of a tiger appears, roaring ferociously and rending the flesh of your enemies. Allies in the presence of a Tiger gain +1d10 to their attack rolls due to the morale boost it provides. It remains for up to an hour (Speed: 4d10, Attack: 3d10, Damage: 4d10 Open). Like all Shadow Guardians it cannot be harmed.

Monkey: This summons a shadowy Monkey of protection. The Monkey remains for up to a day and travels with the caster. It has two basic benefits. The first is its survival Skill (which is 4d10 in any terrain, except water). The second is its protective aura against Demons. Anyone within a 100 foot radius of the Monkey gains +3 to all Defenses when attacked by Demons or Spirits.

Turtle: A creature of longevity the Shadow Turtle can stave off death in the face of poison, curses, and when characters are dying for either mundane or extraordinary reasons. For example, an Immortal struck with the Immortal Killing Sword, would be prevented from bleeding to death in the presence of the Turtle (he would stay in a state of incapacitation but not die). The Turtle Appears as a shadow and crawls into the person it is directed to aid (only one person can be helped per casting). IT remains for one day.

Phoenix: The Phoenix Shadow appears for up to an hour and can detect the presence of anyone who is in violation of any of the martial or celestial virtues using Detect. The Phoenix has a Detect of 4d10.

This ritual the caster meanders about as if dancing. It summons 1d10 flaming humanoid shapes that attack foes at the direction of the caster. Each flaming figure effectively has 5 Max Wounds and can deliver 4d10 Fire Damage (use the caster’s Arm Strike roll for the attacks). If the ritual fails, then an explosion of fire (5d10 Fire Damage) blasts everyone in a 20 foot circle around the caster (always hits, and the caster is harmed by the blast as well).  The figures normally remain for 7 rounds, but this can be extended greatly if more time is put into casting the ritual (the duration being half the time the caster invests in the casting). So a person who spends one hour performing Summon the Dancing Fires, would summon flaming figures for 30 minutes.

Posted by BEDROCK GAMES at 4:32 PM