THE DOVER DEMON FOR STRANGE TALES

The Dover Demon is a local legend in Massachusetts, a creature sighted in Dover during the 1970s. There were multiple sightings, by several different people in a short span of time. It was described as something resembling a gray alien with orange eyes. But other than that very little is known in terms of how dangerous it might be. It was spotted crawling on an old stone wall, and walking down a road in the woods (it was then followed but the person turned back when they felt it was posturing to attack). What fascinates me about the Dover Demon, beyond it's proximity, is the possibilities. There is a sense in the accounts that it might be dangerous, but exactly how, is not entirely known. I think this is ideal as it makes them more mysterious. This entry explores that mystery surrounding them by filling in the blanks with my own thoughts. It is It is done for the Strange Tales of Songling System. While Strange Tales is a game set in historical China, and the Dover Demon is a cryptid spotted in modern Massachusetts, I think it still fits because it is ultimately an anomaly account, a record of the strange. Increasingly I am working on making a more general system for Strange Tales (one that can work in Song China, but also in the modern US). 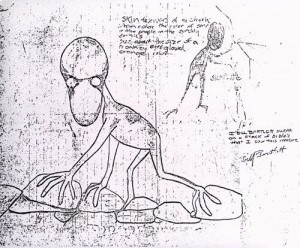 The Dover Demon is a small humanoid creature sighted around the town of Dover in Massachusetts during the Spring of 1977. It is said to have a large head, with no mouth or nose, and two glowing orange eyes (in some descriptions the eyes are green). Its small body ends in thin arms and legs, with hands and feet that both have long tendril-like digits. Its skin is described as 'rosy orange'. From a distance it might be mistaken for a small child or a young gibbon. It is not known if there is one Dover Demon or if many exist, but most reports place it near water.
The Dover Demon is a timid hunter of humans, due to its slow speed and weak body. It relies on its own disarming appearance and cleverness to outwit people so it may use its mobilizing gaze on them, then feed on their memories. Usually it attempts to seem harmless, even friendly or playful. When it has isolated a person, and there is sufficient distance between them, it will use its gaze and will wait until the target is unable to move before coming in to attack.

Climb: The Dover Demon can climb surfaces easily, as if walking using its tendrils to grip.

Gaze: The Dover Demon's glowing eyes mesmerize their prey, tapping deep into their subconscious and shutting down ability to move. Make a Persuade roll against the Target's Wits. On a Success the victim suffers a -1d10 to Speed. On a Total  Success the victim suffers a -2d10 to Speed. Speed returns at a rate of +1d10 an hour. The Dover Demon can keep making such attacks each round, and when the target is dropped to 0d10 Speed, they can no longer move and suffer -2d10 to all other skill attempts.

Tendrils and Memory Drain: The Dover Demon can use its long tendril like fingers to enter the ear or nose of a victim, pierce the skull and draw in memories. Make its Tendril attack against the Evade of the target (against mobile targets it can roll 3d10). On a Success the target loses 2 Hardiness from the skull piercing (returns at a rate of 1 per month); then each round, unless the Dover Demon is stopped, it can drain memories (permanently draining 1 level per round it does so). Victims have no memory of the attack. A person reduced to 0 level, becomes catatonic (one Medicine roll TN 10 may be made each month to alleviate their condition). The Dover Demon must feed daily, an amount of Wits equal to its own or it begins to lose Hardiness at a rate of 1 per week until it dies.