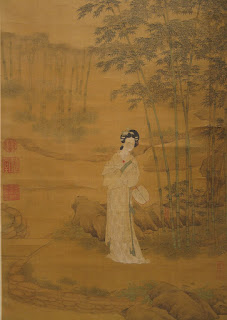 To celebrate Halloween, I am doing some monster and adventure entries for Strange Tales of Songling. This one is inspired by another short account in the Library of Chinese Classics edition of Strange Tales from the Liaozhai Studio. The original version is much more adult, and graphic. I toned it down for the blog but tried to keep the elements that provoke a sense of unease and horror. I would certainly encourage folks to read the original versions of the tales themselves. The Snake Woman tale can be found on page 1921 of Library of Chinese Classics, Selections from Strange Tales of the Liaozhai Studio.

One of the fun aspects of making creatures inspired by these accounts is all you have to go on is the account itself sometimes. It does depend on the entry. While they are all presented as gathered accounts, some are longer, with deeper information and more like stories. But others feel more like a piece of information gathered about something strange. I like the latter best for gaming material because there is a lot of room for speculation. Snake Woman falls into that category. This is why the monster entries in Strange Tales of Songling should be read by the GM as possibilities, not as rules governing all creatures of that type. They are just one possible account, but other accounts of that type of monster could exist, the account in the book could be wrong in your campaign.

SNAKE WOMAN
These otherwise normal women are said to be the offspring of mothers who mated with snakes in the past. It is possible the accounts are confusing a magic ritual involving snakes with mating, and unknown if this process has produced any male children. Aside from having a slightly pointed mouth, nothing about them suggests anything supernatural. However when they become angry or passionate, their tongue turns thin and sharp and flicks great distance to envenom the object of their emotion. This however is a passing state, a moment of temporary madness that they have no memory of. There are rumors of some snake women who are aware of their condition and in full control of it. The venom from their tongue is particularly deadly. They also have a strange affinity with Killer Snakes, which enables them to summon and control the creatures (though this is mostly an unconscious reflex, not an ability they are often aware of).
Defenses: Hardiness: 4, Evade: 4, Wits: 7
Key Skills: Tongue Strike: 2d10 (see Venom), Speed: 2d10, Survival: 2d10, Other skills vary by individual

Venom: On a successful attack with their tongue strike, roll 4d10 against Hardiness every 10 minutes (you can stop rolling if an antidote is administered). On a Success the person dies in 1d10 minutes. The attack itself does no damage as the wound it creates is incredibly small and painless.

Summon and control Killer Snakes: This is an unconscious ability, usually occurring during distressing dreams. Snake Women can summon Killer Snakes to attack those they hate or fear (see Killer Snakes entry on page 61 of Strange Tales of Songling). They can summon 1d10 Killer Snakes a day through this method.

Posted by BEDROCK GAMES at 1:09 PM