STORMS OF THE MARTIAL WORLD SESSION TWO: BLOOD AND GOLD

This was the second session of a new Wandering Heroes of Ogre Gate campaign. See the FIRST SESSION LOG to read about the previous session. 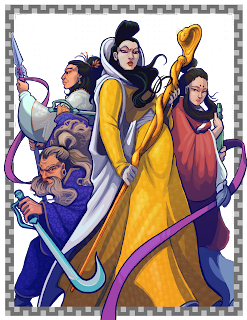 Characters
Peng Ke-Yen: Eccentric daughter of a merchant who goes against conventions and is notable for her white and black streaked hair. From Dashen village.

Zhendao: A former slave of a man named Zhao.

Shin Du: A performer and actor who is a perfect shot with the bow.

Ke-Yen and Pei went to the Sword and Wine Inn to prepare as they awaited their duel with Tiger Clan. There they met a performer named Shin Du who won them over by firing an arrow at an orange on a merchant cart (among many other antics). They invited him to join them in the fight against Tiger Clan but as they were talking, Xu An (a woman from Tiger Clan) leapt down from a roof and attacked with her butterfly swords. Sabres were crossed and a bloody fight ensued, as Xu An accused Ke-Yen of spreading rumors to divide her from her benefactor (Five-Dagger Chang). It ended with Xu An heavily wounded and in flight.


Ke-Yen sought allies among the criminal networks in the city, eventually convincing the Dancing Scorpions to join and participate in the duel (because it would open up the Tiger's portion of the city to them).

They gathered the heroes of Master Qian Bei's Water Sword School, the Dancing Scorpions and a one-armed physician named Song Pei, then went to the Yellow Forest to fight with the Tiger Clan.

There they waited. Shin Du had manufactured some Divine Fire and prepared thunderbolt balls for use during the fight. Two figures approached, an old lady and a young man in chains with a slave brand named Zhendao. The woman announced herself as Five Dagger Chang's mother, and said Tiger Clan had sent its oldest and least respected to deal with them.

Master Qien Bei insisted on fighting her in small groups out of fairness. A melee broke out and the thunderbolt balls went off, leaving both Granny Chang and Zhendao a bit bruised. Granny Chang threw daggers at all her attackers and Ke-Yen, Shin Du, Peng Pei and Song Pei were all incapacitated by the attack. However as Master Qien Bei and one of his students closed in, Zhendao stabbed Granny Chang in the back himself, killing her.

He explained he was a slave and that he had been mistreated by Tiger Clan. The group helped to burn Granny Chang's body, and then treat the wounds of the fallen. When people were recovered enough, Ke-Yen spoke with the Dancing Scorpions, who had done nothing, and agreed to pay them for their troubles. They were satisfied and offered to do business in the future with her.

Zhendao told them that there had been a lot of strange activity at the sect headquarters, the Old Tiger Fortress, and they suspected that Tiger Clan had arranged the fight as a distraction for something bigger.

They debated going south or going directly back to the city. At first they began heading south but were attacked by members of the Tiger Clan. They managed to kill them and decided to head directly to the city.

There they saw wanted posters with the face and name of Abbot Yan (of the Temple of Sleeping Mercies). The posters said he was wanted for murder and robbery. They went to the magistrate and learned officials believed he had slaughtered his fellow monks at the temple, then taken the five million spades they'd deposited at the Yun Hu Bank (see previous session for details). They had one person jailed who had witnessed Abbot Yan leaving the temple with a bloody knife.

Reluctantly the magistrate gave the heroes a moment with the witness to question him. They eventually learned that the man was instructed to lie by the head of his guild, Zhao Yi (a rice and pearl merchant).

Outside they investigated in the city and visited the bank. Zhendao inspected the temple and found evidence of Five Dagger Chang's dagger strikes on the wall. They also learned that the gold might have been transported to a rice emporium on the canal. They found one where remnants of the original chests containing the gold were littered amid debris.

The party then presented this evidence to Master Qien Bei, as he had proven to be helpful to them before. He reacted with surprise, saying that Zhao Yi was a well-known and well-respected man, and that for this reason, he also hesitated to take action. The party agreed that he need not intervene at the moment, but wanted to keep him apprised of the situation, and told him they would continue their investigation.

Eventually they connected the emporium to Zhao Yi and inspected his residence. There they watched until they witnessed a messenger arrive and depart. Then they followed the messenger to the Sword and Wine Inn, where he met with Xu An.

The party confronted Xu An in her room. Realizing she was outnumbered, and having been gravely wounded in their last exchange, she agreed to talk. She explained that Five Dagger Chang had fled to Hu Qin. She hinted that she might be willing to work against Tiger Clan if the party helped her become its leader.

First however she said they would need the body of Granny Chang. Five Dagger had planned to build a shrine in her honor and would be expecting her body if she arrived in Hu Qin. They headed back to the Yellow Forest to get Granny Chang's remains.

This is where the session ended.
Posted by BEDROCK GAMES at 7:16 PM