Human Lanterns is a 1982 Shaw Brothers release, directed by Sun Chung and starring Lo Lieh, Tanny Tien Ni, Tony Liu and Chen Kuan-Tai. It is a grotesque, and sometimes disturbing, blend of horror and wuxia that produces an atmospheric and memorable final result. Since its release it has become something of a cult classic with a reputation for its gore and blood (which some think is overstated). 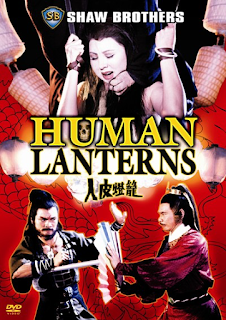 A couple of notes of caution about this review. First, the film features graphic violence against women, including rape, and this review will discuss those subjects. In addition the summary contains spoilers.

The storyline of Human Lines is quite simple. Two rivals, Master Tan and Master Lung, have an ongoing feud. Master Lung, embarrassed and filled with jealousy when Master Tan attempts to marry his favorite courtesan, Yen Chu becomes determined to best his rival at an upcoming lantern contest. He sets out to hire the greatest lantern craftsmen he can find, and happens upon a man he once defeated in a duel over a woman (whom Master Lung later married). The man, Chun Fang, still has a scar on his face from the fight and reluctantly agrees. What unfolds is a horrifying plot of revenge as Chun Fang kidnaps people dear to Master Lung and flays their flesh in order to fashion them into human lanterns. It ends with a magnificent showdown and a strangely compelling conclusion.

This is a violent movie. Not in terms of quantity, but in terms of the kind of violence. Human Lanterns plays at times like a slasher movie and has at least three onscreen flayings and one rape. So this is a different kind of violence than you normally see in wuxia. This is also a world where all of the characters, except perhaps the women, are not very likable. This is important because it is part of the point of the movie. But it is also hard to watch at times and on the gory end of the spectrum. It isn't the worst that is out there by any stretch. It just isn't the style of gore one expects in a period wuxia film. 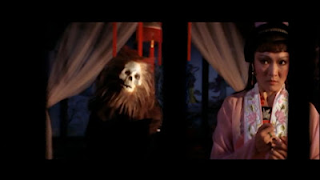 The heart of this movie is the villain, Chun Fang, played very convincingly by Lo Lieh. He is obsessed with his loss to Master Lung, which sent him on a terrible downward spiral. Now he blames Lung for all his misfortunes and has dedicated his life to an unusual form of martial arts and to perfecting his plan for revenge. He vows to "...strip Lung of everything he possesses and destroy everything he longs for." This is a butcher villain, who dons a skull mask and beastly arms, to kidnap his victims then drag them to his lair where he tears their skin to make lanterns. It is a twisted scheme, in which he makes makes the lanterns Lung by killing those he loves and longs for most.

Even though the other main characters are largely unsympathetic, they are still interesting character studies. Lung is the chief protagonist and he is obsessed with material wealth and reputation. His grudge against Master Tan is clearly a petty one and the lengths he is willing to go, as well as the people he is willing to harm in the process, could almost make him a villain in his own movie. Master Tan is equally unlikeable, and the film begins with him parading a well-known courtesan who is a favorite of Master Lung at a banquet, to humiliate his rival. In any other film, they'd be antagonists, but in Human Lanterns their flaws are overshadowed by Chun Fang's evil. 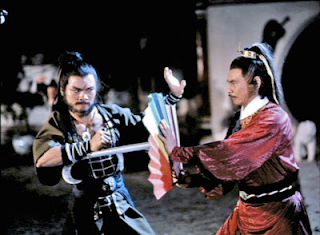 This is a movie all about grudges and revenge, taken to extreme and shocking conclusions. The rivalry between Tan and Lung, and the initial burst of humiliation and anger that Lung experiences, is mirrored by Chun Fang's much larger humiliation and ensuing grudge. Chun Fang is what Lung could become if he continues on the road. And Chun Fang uses their rivalry against them, casting suspicion on Lung for the disappearance of Tan's sister for example and causing them to exhaust themselves in conflict with each other.

The fight choreography is quite good, with heavy reliance on lightness kung fu. I think this is effective. There are perhaps fewer fights than in some other films, but what fights there are, definitely held my interest. The last battle in particular worked for me. I liked the way it progressed, how it started out between two characters and very believably increased that to three then to a full pitched battle with many opponents facing Chun Fang (who seemed all but invincible). It also moves through terrain with ease.

Human Lanterns does a good job building atmosphere, both through judicious use of its set-pieces and through a lush soundtrack that, given the year it was made, works well (except maybe for one very small and brief excursion into disco-like territory).

It is only at the end that Master Lung has a spark of likability to him. In the aftermath of the disasters that befall him, he is more reflective and says he wants to seek enlightenment. He then gives his belongs to the poor and heads out to wander the world alone. But the ending is deeply ambiguous in my opinion, largely due to the suggestive music in the background. By the this point in the film, Lung is a shattered man (both physically and spiritually). It is unclear, at least in my view, whether he is truly going to seek to become a better person or if he will start down on the same path as Chun Fang.

I think Human Lanterns is a solid piece of film making. It manages to make you care about characters who are not the most sympathetic people (largely because the villain is so diabolical) and weaves suspense, terror and action in a way that keeps you wanting to know what happens next. That said, it isn't for everyone. This is the kind of movie that will appeal to someone who likes both Shaw Brothers and Hammer Studios films. I recommend this movie with the caution that it isn't for everyone.

Posted by BEDROCK GAMES at 9:34 AM