BLOOD OF THE DEMON MOON CULT SESSION 23: INTO THE HAWK BEAK

This is the campaign log for the Twenty Third session of a google+run Wandering Heroes of Ogre Gate campaign. The previous session is described HERE.

After meeting with Xinyu on Snake Peak, Bone Breaker went to the Kushen encampment.

Speaking with Ganbaatar, he asked for a good musician to infiltrate the House of Paper Shadows. Ganbaatar recommended, Galsuren, his nephew. Galsuren agreed to help and secretly join the House of Paper Shadows to infiltrate them. However he plead with Bone Breaker to convince Chief Cheren not to marry his daughter Ho’elun to an outsider (saying he was in love wth her).

Bone Breaker looked into the matter, meeting with Cheren and offering to pay an enormous dowry on behalf of Galsuren. Cheren was okay with such an arrangement but said his daughter would need to consent (and he suspected she wouldn’t).

Meeting with Ho’elun, she said she might agree to it if her father insisted but she found Galsuren unimpressive. Over the course of the conversation, she asked Bone Breaker to take her with him and teach her Kung Fu.

Bone Breaker asked her to demonstrate her skills in a duel with Little Frog. While Ho’elun failed to defeat Little Frog she demonstrated enough talent with her cudgel to impress Bone Breaker and he agreed to take her on if her father allowed it.

He again spoke with Cheren who agreed to the arrangement if Bone Breaker became her Sifu. Bone Breaker took her on and asked her if there were any other comparable heroes in the camp who could join them (as he wanted to train two disciples to master Thunder Kick of Zhang Twins).

Ho’elun suggested he speak with Badai. After she had kowtowed and gathered her things, they went to Badai’s tent. It took time to rouse him and when he emerged he was disheveled and belligerent. Bone Breaker and Badai nearly came to blows as Badai continued to show a lack of respect, but he was eventually convinced to take Bone Breaker as a Sifu and join them. Gathering up his belongings and some wine gourds he left with Bone Breaker and his retinue for the south.

They set out for the south to meet with Master Ta and find a powerful Ritual Master to help them contend with the House of Paper Shadows. Their trek was largely uneventful (except for a few run-ins with friendly sects and allies). On the way his people brought him news that a Ritual Master named Wind Bone, who resided near the Great Golden Roc Nest, was rumored to be the greatest sorcerer in the land.

When they arrived at Master Ta’s he informed him that Master Shan had been given his land in Hai’an and would no longer be an issue (the two had been feeding over land west of Master Ta’s villa). Little Frog rejoined Master Ta who gave Bone Breaker a red token in thanks. He informed him that the token would give him access to the assassination services of the Fragrant Petal. Before leaving Bone Breaker sent out a message to Lady Plum Blossom and the Fire Lance Brothers to meet him at Mystic Sword Temple.

On his way to the Golden Roc Nest Bone Breaker stopped at the Fragrant Petal and spoke with Madame Hamaya. They worked out an arrangement where he would retain her services.

They hired a mountain guide and traveled up the cliffs, mountainsides ad to the peak where Wind Bone’s cave was said to be. When they reach the peak, only Bone Breaker, Jade Priestess and Abbot Firebrand scaled it. As they climbed, both Bone Breaker and Abbot slipped and fell into a Roc nest. Bone Breaker crashed into a great egg, which cracked and spilled its contents. As he cleaned himself off, a staggeringly large beak and glowering eyes appeared before them. He commanded Abbot to attack, so the monk leapt up and struck it hard with his spade. Jade Priestess leapt down and used her Ice Claw technique to slash its breast. The creature then dove and bit Bone Breaker in the chest, nearly killing him. Again Abbot beat the thing with his spade and Bone Breaker used Kick of the Golden Elephant to send it back and kill it. 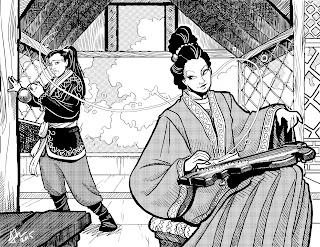 Bone Breaker called the rest of his men to join them and secure ropes for a safer climb. At the peak they found a cave and called Wind Bone. Slowly an old man emerged carrying a flute carved from bone.

Bone Breaker asked what kind of magic Wind Bone could perform. In response he told Bone Breaker’s men to retrieve the body of the Roc they had killed and bring it to him. When they had done so, he played his flute and coughed up some blood. The Roc then rose and flew away.

Wind Bone cracked Bone Breaker in the arm with his flute (doing a wound) and asked again what his nature was. Bone Breaker insisted he was merciful but swore he wouldn’t stand still for punishment.

Wind Bone said he would help, but that Bone Breaker must learn to play the flute. He also said it would take to time attack the House of Paper Shadows, but once they did, it would be the end of the organization.

They continued east to Mystic Sword Temple. ON the way they were threatened by men hiding in the trees with bows drawn demanding payment for passage. Bone Breaker told them to get lost and they let lose eight shots directly at Abbot Firebrand, hitting him in the belly and cousin him to collapse. Bone Breaker told everyone to attack and within moments they had subdued the group and were dragging its leader before him.

The man wore a metal mask and said his name was Lord Iron Face. Instead of killing him, Bone Breaker offered an alliance, saying he would help the bandits find better targets if they could work out an arrangement where the group served Bone Breaker’s interest. Lord Iron Face agreed to the terms and the group went on its way.

They reached Mystic sword Temple, where Lady Plum Blossom was arguing with the Fire Lance Brothers. Bone Breaker spoke with Lady Plum Blossom about acquiring the Heavenly Pills from Compassionate Monkey. First he asked her to join him as he tended to some matters in Hai’an and elsewhere. She agreed and they continued east to Mount Bao, to find a great martial hero named Flying Snake.

When they reached the mountain, they found a village. Flying Snake’s followed ran out and said “Who comes to stand before the greatness of the supreme earthly god, Flying Snake”.

The men returned to the village and came out carrying a man in a sedan chair covered in a canopy. His hand appeared through the curtains and he asked what Bone Breaker wanted.

Bone Breaker said he heard that Flying Snake was powerful and wanted to know if the rumors were true.

Flying Snake said he was a god and that there was none more powerful than himself. That Bone Breaker and his men should worship him and do his bidding.

Bone Breaker expressed doubt and asked for a demonstration. Enraged Flying Snake levitated up out of the sedan, revealing himself to be stout and heavy framed. He threw out his hands and several bolts of lightning flew from them toward Bone Breaker, who used Whirling Dodge to escape the lethal attack. Bone Breaker bowed and said he believed in Flying Snake’s powers.

Bone Breaker agreed to acknowledge Flying Snakes divinity and asked for help dealing with the House of Paper Shadows. Flying Snake said Bone Breaker could take 100 of his followers for this task, if he spread word of his powers.

Bone Breaker was pleased and said he would meet the followers soon, but that he first had to go to Red Mountain Villa.

Posted by BEDROCK GAMES at 3:02 PM