Myths and History in Servants of Gaius 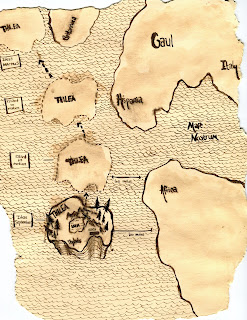 Servants of Gaius can handle just about anything in my opinion. The game was designed with investigations, mysteries and adventures in mind, but in terms of tone and genre it can support a broad range. We didn't write it to be strictly one kind of setting. It isn't Ravenloft in Imperial Rome for example. Certainly a GM could run it as a horror game, but that wasn't our intent, the intent was to deliver a deeply Roman setting but leave the final mystery of Neptune in the hands of the Gamemaster. But the way I run Servants of Gaius is very specific. I commit to Roman ideas about history and reality, using those as the foundation of my adventures.

I like to have a strong mix of the fantastic and mythical. In the past I took a more realistic approach to historical settings (particularly Ancient Rome), treating them with the seriousness I felt they deserved. But over time I started to lighten-up a bit and learned that mixing myth with history pays dividends in the end. 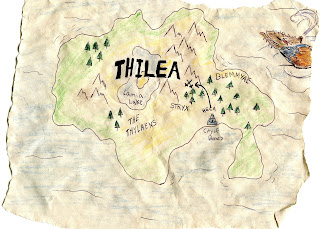 Above is a map from my Servants of Gaius campaign and illustrates how myth can blend with history. This is the legendary Island of Thule. I took certain liberties with it and figured out a way to tie it to a growing conflict (in my own setting) between Rome and a recently ressurected Antony and Cleopatra.

The players were sent on a mission by Caligula to recover "The Skull of Antaeus" a magical artifact that grants the wielder power over sea and land. Antaeus was a giant, the son of Poseiden and Gaia. According to legend he was buried in Mauretania, and his tomb was located by Quintus Sertorius (a Roman General and proconsul of Hispania who tried to break from Rome during the reign of Sulla). The details of the adventure are pretty extensive, but they revolved around locating the Skull which had been moved from Mauretania by Sertorius to the Island of Thule. In Thule Sertorius set up a small colony to keep and protect the skull while he continued his campaign in Hispania. In 73 BC Sertorius was assassinated, and a small cult of Iberians formed around his memory (he was popular and nearly revered by them in life). A mystery cult, their final secret was a route to Thule.

To make Thule a bit more interesting (and to explain why it eluded navigators for so long) I decided it was a floating island that moved on a somewhat regular pattern (above map). I then decided that Sertorius's colony (Heca) was a small pinpoint of Roman civilization surrounded by hostile Blemmyae and a lamia or two (not to mention an aggressive race of dwarven hunters). But even Heca had its problems. In 30 BC or so, a group of women broke away from the city, stole the Skull and brought it north where they established an "Amazonian" city-state under the protection of one of the local lamias.

There are a few grains of historical truth here, but most of it I simply invented or stitched together in new ways. The Sertorian War is quite interesting and I liked taking that bit of history to use as a backdrop for the campaign. It mixed nicely with the myths of Thule, Blemmyae and Antaeus. And in the end gave us a great adventure that spanned several Roman provinces and ended with a bloody battle against a Lamia and her Amazonian priestesses.