This is just an experimental mechanic I devised for my own Servants of Gaius campaign. I like having procedures for dealing with stuff like divine wrath and wanted something that would create interesting results. Putting this out there for people to try if they like it, but this is in no way an official rule. Feel free to give feedback. If we get enough positive responses I may develop this further.

Unleash the gods
The gods are fickle and petty in Servants of Gaius. What pleases Jupiter one day, might anger him the next. Use these optional rules to bring the gods into your campaign. They work off the pattern established in the Ritual Skill roll, but extrapolate for a wider range of scenarios.


The gamemaster should be careful when gods and player characters interact. It is easy to opt for the best plot hook or most interesting result. This can be an obstacle to fairness and to the integrity of your setting. Sometimes it helps to have a mechanic mediate these sort of in-game relationships so the outcome is never certain from the GM’s or player’s point of view and to keep from playing favorites.
Anytime a player character accomplishes a heroic  feat or performs a wicked act (see description below) that would attract the god’s attention roll a d10. As a general rule the god in question should be the most appropriate deity (even a non-Roman one in some cases) to the situation. On a result of 1, the PC has angered the god. On a result of 10 the god is pleased. In both instances you roll once more to determine the extent of the god’s response.  Results of 2-9 indicate divine indifference. 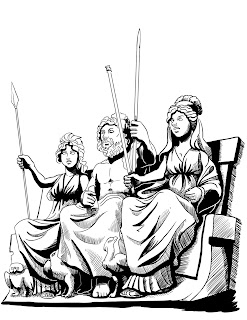 Effects
Curse
The god takes a brief interest in the mortal, issuing a small curse that impedes his ability to function properly or produces embarrassment. This will have tangible effects such as tremors, persistent drooling or abnormal growths (horns for example). This imposes -1d10 penalty to skill group related to gods area of power. The curse generally lasts a month or so. This can get worse with time if the PC displeases the god again. If the mortal continues to displease the god, he may find his condition permanent.


Wrath
The god the god takes an immediate interest in the mortal and singles him out for divine punishment, hounding him to the ends of the earth.  He may simply smite the poor fellow on the spot (in very extreme cases) or he could send his minions to do his dirty work over the course of months or years. In most cases the mortal spends his remaining days evading the god’s wrath.


Blessing
The god takes slight interest in the mortal’s deed, granting a minor blessing. This usually takes the form of something vague but palpable such as greater clarity of mind or sharper sight. Blessings normally last about a month and bestow a +1d10 to related skill group.


Divine Favor
The mortal is special and worthy of the god’s efforts. He chooses the mortal for some special purpose, becoming his chosen. This is a tremendous honor but usually comes with great risk. Being the servant of one god can make a man the enemy of other gods.  The exact nature of the special purpose will vary from deity to deity.


Heroic Feats and Wicked Acts
Heroic Feats and Wicked Acts are exceptional. Simply saving a person’s life is not a heroic feat, since it happens all the time and is frankly of no interest to the gods. But saving the emperor’s life or discovering a lost artifact after a long quest are heroic. A Wicked Act must also be more than merely bad. It requires a level of malevolence and evil that would attract the attention of the gods. Betraying an entire village so its inhabitants are slaughtered could be a wicked act.


Remember heroic feats and wicked acts can both attract either the gods’ pleasure or anger. A mortal who does something vile may be rewarded for it but he may also be punished.

Posted by BEDROCK GAMES at 3:48 PM