DHAMMA AND HAI'AN
Min and Ong Lao went back to the Inn of the Emerald Monk and asked Mr. Tao if there were any heroes or priests in the establishment. He pointed them to a table where a heavyset nun was eating bowls of noodles. Ong approached and asked if he could join her. She said yes, then suggested he should offer to buy her some noodles, then she would speak with him. He ordered her some noodle bowls and she ate about four before looking at him and telling him her name was Wu Gaolin. 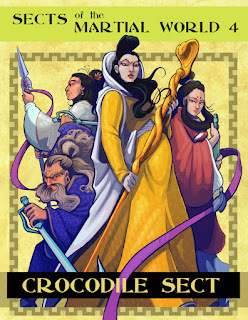 Ong explained that they were dealing with a swordswoman in Dhamma who was possibly the ghost of Lady White Blade. They were not sure if she was really a ghost or not and wanted to recruit a hero who knew about these matters.

She said she could accompany them to deal with the swordswoman, and claimed she had a technique that could reveal whether it was indeed a ghost. She asked if he had any battle plan in mind. Ong said they hadn't, and she suggested they face her head on, surrounding her from all sides.

They purchased some food for the road and went toward the vale where they had encountered the ghostly swordswoman. As soon as they saw her, Min used Rain of Arrows twice and the swordswoman collapsed to the ground. They determined she was not a ghost, just a woman dressed to appear as a ghost. They captured her and Min ventured into Lady White Blade's tomb. There she took time and recorded two techniques written on her body. Then she burned the body and they left the vale as it filled with dark, thick smoke.

They headed  to Paw, a small rice farming village in Dhamma. There Ong spoke again with P'Dee who gave him two sacks of rice and told him to return to the village anytime he passed by. Ong gave one sack to Gaolin and they walked with her to her temple.

On the road she explained that she belonged to Purple Lotus Temple, that they believed in mercy, but only to a reasonable point. From what Min and Ong could gather, her beliefs seemed like a Yen-Li interpretation of Hen-Shi. On their way to the temple, as they passed through the hills of the Demon Moon Lands in Hai'an, they were accosted by eleven disciples of Twin-Fisted Eagle Sect.

The disciples strutted around and eyeballed the party. One of them said "You are aware of the toll, aren't you?"

Ong asked what the toll was, and the man replied "For you? Fifty Silver Taels."

Ong said the amount was outrageous.

"Then I'll just have to take your arms as payment," Said the man.

The three of them fought the disciples. It was a lengthy battle and eventually Wu Gaolin fell to their palm strikes. Min and Ong knocked out the remaining disciples and were able to heal Gaolin before she died. They tied up the Twin-Fisted Eagle Disciples, creating a train of prisoners. Ong then placed Gaolin on his back and carried her to the temple.

At the temple they were greeted by the head Abbess. She gave them some manuals and put the prisoners to work in nearby mines. She offered to send one of her disciples, Xiaomin, with them on the rest of their journey, as the Demon Moon was approaching. They chose to stay at the temple for the duration of the Demon Moon and do work for the nuns.

YUN HU
Back at Stone Palace Shen Chun organized affairs at the headquarters. He debated what to do about the conflict with Southern Hill Sect and the beggars. He also made sure the work on their new fortress on Stone Forest Hill was progressing.

Jade Priestess returned to Stone Palace with Silent Dagger. They went before Shen Chun and Da Mei Mei, where Silent Dagger introduced them to his new Sifu. They spoke about the beggar problem and Jade Priestess said she might be able to arrange a meeting with their local chief. Shen Chun agreed.

Silent Dagger and Jade Priestess went out into the city. She instructed Silent Dagger to buy bowls of noodles and steamed buns. Then she had him distribute them to a group of beggars near the canal. As he did so, she announced interest in speaking with Ping Wu the regional chief of Nature Loving Monk Sect.

One of the monks said "Come back here tomorrow at dawn and you will have your meeting."

The next day, Shen Chun came with his retinue and saw a beggar with a shock of white hair and tight cap. "I am chief Ping Wu," he said "Greetings sect leader!"

Shen Chun explained he wanted an end to their conflict, that his quarrel was with Southern Hill sect, not the beggars. Ping Wu nodded and said "Very well, we can easily end this bloodshed if you apologize to us for killing our brothers."

Shen Chun bristled at this notion and they debated who was to blame. Shen Chun kept pointing out that they had killed plenty of his men at the Battle of Stonethrow Bridge and that Yellow Mantis had started the whole conflict in the first place.

"This is not what I heard," said Ping Wu. "I heard that Twin-Fisted Eagle sent an exploding statue of Hen-Shi to your sect headquarters, to trick you into fighting alongside him."

Shen Chun was refused to believe the assertion and demanded proof. Ping Wu noted that Yellow Mantis was a righteous man who would never attack his enemies using such tricks.

They debated for some time. Eventually Shen Chun offered a reluctant apology. They asked for a show of good faith from the beggars as a token. Ping Wu said they had nothing to give, for they were beggars.

Still angered at Ping Wu, Shen Chun, went back to Stone Palace with his men and they discussed their next move. Soon after a beggar arrived and asked to speak with the chief.

He came into the reception hall and told Shen Chun that they learned the daughters of White-Haired Crocodile were in Eastgate, seeking revenge against Stone Palace for the death of their father.

Shen Chun gathered his men and sent Devil-Faced Toad and Silent Dagger ahead of them to the city. Silent Dagger and Devil-Faced toad asked around when they reached Eastgate and were told by beggars that he daughters had been seen at the Celestial Pavilion.

They went to the Celestial Pavilion and found them at a table. Devil-Faced Toad got a table, while Silent Dagger walked over to them. He bowed and asked for a moment of their time. One of the daughters looked up and said he was not worthy of their attention, then went back to eating. Silent Dagger reprimanded them for being rude and it escalated to a fight quickly. One of the daughters stood up and they squared off, but Silent Dagger bested her pretty quickly. As he shoved her toward the wall, the other sister leapt up and unleashed a tornado of kicks upon him. He countered her attacks. Eventually he knew he had them both beat, and the eldest sister stopped fighting.

"Out of my way, we're leaving" she said.

"Not so fast," said Silent Dagger. "You were quite rude to me there, why don't you come with me and we'll speak about this in private." She refused and he grabbed her.

This infuriated a patron sitting nearby. He stood up and grabbed what looked like a chain whip from his belt. His eyebrows were thick and fierce.

"How dare you treat this woman in such a despicable way," said the man. "Let's see how you handle someone who is more your match."

Silent Dagger motioned for Devil-Faced Toad to take the guy. As he did so, Silent Dagger turned back to the sister and attacked her. Just as he brought her down, he felt a spray of hot liquid on his back. He turned to see the man holding Devil-Faced Toad's head in one hand, and a flying guillotine in the other.

They squared off. As they fought the Flying Guillotine nearly dropped on Silent Dagger's head twice, but each time he was able to leap against the wall to evade it. He then dropped the man with Storming Daggers and hired to patrons to help him carry the prisoners and Devil-Faced Toad's body outside.

Silent Dagger met up with Shen Chun outside the city and they headed back to Yun Hu. On the way, Silent Dagger shaved off the man's eyebrows.

Back at Stone Palace they interrogated the man. He said his name was Guo Kang and that his father was Guo Yang (a renowned hero).

"Where did you get the Flying Guillotine?" Silent Dagger asked.

"The enlightened goddess gave it to me," he said.

Neither Silent Dagger nor Shen Chun believed this but they asked for more details and Guo explained that it had been given to him by the Enlightened Goddess and that she charged him with retrieving the Life-Keeping Stone. They offered to let him go if he relinquished the Flying Guillotine, but he said he was sworn to protect it.

To prevent problems, Silent Dagger stood him up and fought him one-on-one, killing him swiftly. Then they had Smiling Abbot examine the Flying Guillotine.

"This is indeed a celestial artifact," said Smiling Abbot.

Posted by BEDROCK GAMES at 1:13 PM