The Golden Scroll of Justice is available HERE.

Brendan Davis: What is The Golden Scroll of Justice? 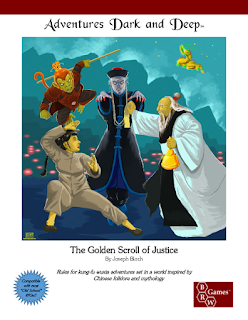 Joseph Bloch: The Golden Scroll of Justice is a rules supplement for old-school role-playing games, that helps the game master create a campaign setting based in the history, mythology, and folklore of ancient China, combined with the sensitivities and tropes of wuxia ("kung fu") films, television, and novels. It's sort of a reaction to the original "Oriental Adventures" supplement for AD&D back in the 1980's, which I felt was far too skewed towards Japanese culture. Not that I don't like ninjas and samurai, but that book gave the impression that "Oriental" meant "Japanese" and I wanted to write a book to counterbalance that impression.


BD: Who did the cover and interior art for the project?
JB: I'm fortunate to have a wonderful stable of artists that I've worked with in the past, but I'm also constantly looking for new artists to work with. For this project, a new (to me) artist, Khairul Hisham, did the color cover art, and a mix of familiar and new arists—Gennifer Bone, Christopher R. Conklin, Khairul Hisham, Eric Quigley, Jeshields, Cary Stringfield, Josephe Vandel—did the interior b&w art.

BD: You describe the game as Wuxia/Mythic China. What can players and GMs expect in terms of flavor?
JB: Mechanically, my hope is that it feels just as comfortable as any regular 1E-derived role-playing game. The mechanics are going to be familiar, so you can concentrate on the setting elements. In that sense, it should hopefully feel like entering a whole new world, with monsters, spells, and magic items that are completely unknown, and which derive from a culture that is going to be somewhat unfamiliar, and thus just a little...off...to an audience used to settings and trappings that are based on European or Classical mythology and history. And when you add kung fu to the combat system, it stays abstract, but there's also room for cinematic kung fu moves that will add a lot of "zing" to melee without throwing everything out of balance.

BD: What were your major sources of inspiration? Were there any movies or books that were important to you when working on the project?
JB: There's actually a listing of inspirational and source books and film in one of the appendices; my own "Appendix N" for the genre. But for me the first kung-fu movie I ever saw was the Five Deadly Venoms, back in the late 70's/early 80's, and that sort of over-the-top presentation of kung fu as this collection of specific, but interlinking, skills really stuck with me. Plus those wonderful masks. ::grin:: But of course there are also classics of Chinese literature, such as Journey to the West and the Outlaws of the Marsh, but I'm also very much a fan of folk-tales as a mirror of the beliefs of the common people. I did a lot of reading of collections of Chinese fables and folk-tales, and a lot of that is reflected in the book as well.

BD:  What were some of the challenges you faced designing Golden Scroll of Justice?
JB: This is the longest book it's ever taken me to write; about three years start to finish. There were some philosophical and mechanical issues that I just couldn't work through, and the book got shelved more than once. Then I'd come back and tinker on the edges, and put it back on the shelf. But once I figured out how to handle kung fu, the whole thing snapped into place and just poured out of me.

Also, I very consciously didn't want to place the book in any specific setting; the idea is for the game master to create their own setting from the material in the book, so there's no equivalent of Kara-Tur. Balancing that against the need to impart as much Chinese culture as I could was challenging, but I think I hit a good balance, based on the way the original D&D books handled European and Classical mythology and culture in terms of magic items, spells, classes, etc. without being bound by a particular setting.

BD: What approach did you take in terms of mechanics to bring wuxia and mythic China to Adventures Dark and Deep?  How does a Golden Scroll of Justice campaign/adventure differ from a more standard fantasy campaign/adventure?
JB: Mechanically, aside from the cosmetic items such as the classes and armor types and such, the importance of the kung fu system, and the mechanics by which characters spend experience points to get skill levels in kung fu, rather than using those XP to gain levels. So, as a rule, a campaign using these rules is going to feature lower-level characters, although a 5th level fighter with three levels of kung fu skill is going to pack much more of a wallop than a normal 5th level fighter.

In terms of campaigns, one of the great things about the wuxia genre in general is its adaptability. While there are certain themes (justice, the wandering hero, etc.), the creativity and flexibility in how the genre is approached is nearly boundless. So you can have a campaign that's more focused on politics, or a war, or discovering lost secrets of kung fu, or fighting corruption, or whatever. In comparison with more standard fantasy games, I would think that there's a lot less emphasis on the dungeon crawl, and more on the wilderness adventure, but even there, the genre is flexible enough to encompass just about anything.

BD: Were there any specific pitfalls you tried to avoid when designing the system?
JB: I was very conscious that I wanted to do a supplement, rather than a stand-alone game, so the mechanical choices I made had to reflect that. I didn't want to create a large number of new game systems and mechanics; wherever possible I stuck with the familiar mechanics already present in the core game (and, naturally, in most other old-school games that are compatible with the original 1E or B/X versions), and simply added to them.

BD: What do you like best about The Golden Scroll of Justice?


JB: The core Adventures Dark and Deep rules use a skill system based on one created by Gary Gygax for Castles & Crusades. What really excited me about this project was the way I was able to take that skill system and radically expand it into the realm of combat; it forms the core of the kung fu system, which is not only completely consistent with the standard 1E-style combat system, which is very abstract, but allows the players and GM to include a lot of the special "cinematic" kung fu moves that most people associate with television and movies in the genre. A lot of the kung fu skill abilities came straight out of hours and hours and hours spent watching those films, and I think fans will really find something to like in it. Plus, it's completely expandable, so any GM can create his own kung fu styles using the ones in the book as a template. It really worked out wonderfully.

About Joseph
Joseph Bloch has been playing wargames and role-playing games since the mid-1970's. He is the author of the Adventures Dark and Deep RPG, an attempt to expand and develop 1E along Gygaxian lines, and Castle of the Mad Archmage, an immense old-school megadungeon adventure, along with various other role-playing projects. He is president of BRW Games, and runs the Greyhawk Grognard blog.
Posted by BEDROCK GAMES at 9:11 AM