Today is the day that Bill Butler, the co-founder of Bedrock Games, my creative partner and friend, passed away. I always spend a lot of time thinking about him in the days leading up to the 3rd of September. And this year I thought I would explain what Bill brought to Bedrock, why he was so important, and why his influence continues to be important. 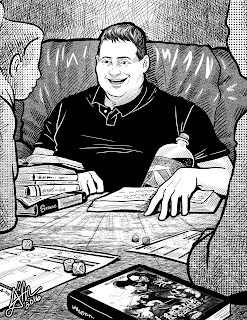 Bill was the gaming wizard. I don't think people truly appreciate how much Bill loved gaming. I am a gamer, but my devotion to the hobby pales compared to his. Bill was a person who gamed possibly 4-5 nights a week (I can manage 1-2). When he passed away, and we attended his memorial service, people identified themselves by the day on which they gamed with Bill (i.e. I am so and so, from Bill's Tuesday game; I am so and so from his Saturday game).

And playing that much made a difference when we sat down to design. Bill played games, read games and thought about games all the time. I believed I knew a lot of systems and games before I met Bill. No. Bill demonstrated an encyclopedic knowledge of the hobby I never possessed. He knew every system imaginable, knew what made that system unique, what was good about it, and what wasn't good about it (with plenty of subjective opinion thrown in for good measure). He understood game systems, and I always deferred to him when we were managing mechanics (we both did a bit of everything, but basically he was more the mechanics guy and I was more the writing guy). If you don't have sound mechanics, there isn't much to write about.

After Bill died it took me and the others a while to do this without him. Because we buried ourselves in making new material after, there was an explosion of content, but I still feel it took time to bring the games to a focused level that fit Bill's more demanding standards.

One thing Bill helped maintain was quality control. He was very good at tightening a system. You can see the difference very clearly when you look at a game like Sertorius, which he was involved with from beginning to end, and compare it to Wandering Heroes of Ogre Gate, which he was involved with in the beginning but was unfortunately not part of the design process after the first few months because of his death. Don't get me wrong, Ogre Gate is a very good game, it was also the game we needed to make at the time, but it was part of learning not to design without Bill. And that made it very different. I think by the time we got to Strange Tales we had a better sense of how to implement the mechanical vision Bill had for these games. A word Bill used a lot when we talked design was "sleek". He was always interested in sleek design. Which is why we made Strange Tales as sleek as we possibly could.

Another aspect to Bill's approach was this: once we decided upon a course, even if it was one he didn't like, and even if he grumbled a bit afterwards, he would eventually say something like 'okay we can do it like that if we do Y'. He was good at figuring out a way to steer the course once we settled on an overall vision (even if it wasn't his preferred vision).

As an example when we did the Network System, I knew I wanted d10 dice pools. They are somewhat of a tough sell, or at the very least, a bit divisive. I won't get into the pros and cons as most gamers know them. But after some objections, Bill agreed to do d10s if we adhered to 'roll a hand of d10s and take the single highest result'. That was his exact phrasing which I've tried to keep. And that is what made the system work so well. If it had been any less simple, it would have been too fiddly. In a lot of ways, Bill wasn't a fan at all of d10 dice pools, and he especially hated 'buckets of dice' games. So I think he was the best person to create a d10 dice pool system for that reason.

Our initial design of the system was often me proposing all kinds of things I wanted and Bill saying no, recommendations ways to make what I wanted work, or saying yes. In the absence of Bill, it became very hard to appropriately gauge the level of restraint he would have brought to an idea. I had two very capable co-designers helping me at that time (Dan and Ryan) but we were all committed to the idea of trying to preserve Bill's spirit in the design process, and I think we all had our own difficulties figuring out the answer to what Bill would have thought. I know I personally found it to be a very delicate process because it was just as easy to overplay Bill's potential objections or praises of an idea, as it was to underplay them. We wanted to preserve the dynamic that was in place when we were designing Sertorius with Bill. Obviously that is an impossibility but something we really strove to achieve.

One thing that Bill's passing changed as well was how we handled any design conflict that came up. When you lose a voice at the design table the way we did, you gain a greater appreciation for the voices present. Our disputes became a lot less petty or ego driven.