THE BRIDE OF FRANKENSTEIN

I almost forgot about it too.

But delving back into horror movie classics for The Horror Express (THE) has reminded me of its importance. Take The Bride of Frankenstein (caution: spoilers ahead for a film that came out 85 years ago)

This week we'll be talking about it on THE, and rewatching it last night I forgot just how much fun it was. I remembered the tragic elements but had forgotten about the humor, the whimsical fantasy of the homunculi, and the stagey rolled Rs of Lord Byron. This is a campy, fun movie, that is still horror, but not just horror. It is a complete experience hitting a number of emotional tones over the course of its 1 hour and 14 minute run time. 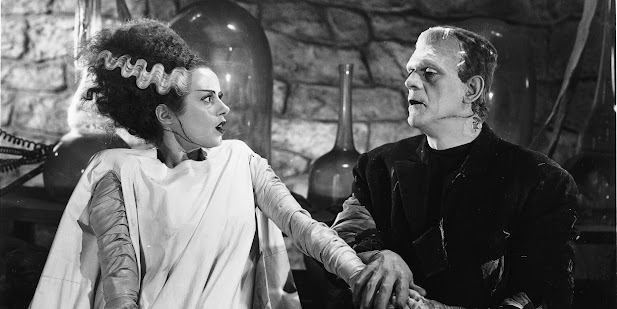 Directed by James Whale and released in 1935, it is a sequel to Whale's 1931 original Frankenstein. It picks up where the first movie left off, with the Monster and Henry Frankenstein both surviving. Henry recuperates and seems bent on a path of redemption, while the Monster ventures into the world, making a single friend, but ultimately reaching the conclusion that it is unloveable. Taking a thread of plot from the book, the movie is about the Monster's request for a companion, which it demands Frankenstein create for it. But this version brings in the deliciously vile Dr. Septimus Pretorius to goad Henry into resuming his research into making life.

Dr. Pretorius is a fellow scientist, albeit a disgraced one, who has succeeded in seeding life and creating people whole cloth. His creations are much more humanlike than Henry's monster, but they are diminutive. He proposes they work together to create a female creature. And the film culminates around the successful experiment to create the The Monster's Bride.

However, The Bride rejects the monster just like everyone else. Believing he is truly alone and unlovable, the monster pulls a lever that explodes the laboratory saying "we belong dead", killing himself, Pretorius and The Bride but letting Henry and Elizabeth (Henry's wife) flee.

The film has a tragic story, and it brings more humanity to the monster than the first installment, but it is peppered with humorous moments. And much of the horror fun in an over-the-top way. A lot of this is due to Ernest Thesiger's performance as Dr. Pretorius. He is indulgently evil, completely rejecting moral norms. We see him delighting in fabricating small humans and dressing them up in royal attire. He enjoys a macabre meal in a tomb after an evening of grave robbing. It is a great character and memorably performed.

The film also has quite a bit of heart to it. The monster befriends a blind hermit who plays the violin. He learns to speak and to smoke from the blind hermit. As with the book, his friendship is short-lived when others stumble upon the two and reject the monster. This aspect of the movie really works and gives the final scene its heft.

There is also the Bride herself, who only makes a brief appearance at the end. But its quite memorable. Most people are probably at least familiar with the look of the Bride. But its really in the physical performance of Elsa Lanchester. She is strange and captivating, mirroring the awkward entrance of the monster as a new creature born into the world.

Ultimately this is just a fun movie. Horror can have an element of fun to it. One of the reasons I like a lot of older horror films, particularly from the black and white era, is there is often a good streak of dark humor through them (something you see in 80s horror as well). Here it certainly succeeds in making a better movie than the first Frankenstein, using fun but also building toward a tragic conclusion.
A couple of things I did notice this time. Quibbles, but given the fun tone of the movie, I don't think they are particularly important. The film is framed as a discussion among Mary Shelley, Percy Shelley and Lord Byron where she regales them with further tales of Frankenstein and his monster. This would have historically taken place in 1816. But the movie contains a reference to a grave with a death date of 1899. Another slightly awkward element I had never really noticed before, when The Bride is brought to life, Dr. Pretorius announces her as "The Bride of Frankenstein", basically making the mistake audiences have made in naming the monster.
Of course with a film like this, these are not important observations. They don't really take away from the movie. I just noticed them this time around (and I am sure there are possible explanations for them).
I certainly would encourage folks to check out the Bride of Frankenstein this Halloween season. We will be talking about it this weekend on the Horror Express and I look forward to getting Joel and Adam's opinions on the movie. I wasn't able to find it for free on any streaming service. But it is widely available to rent or buy.
Posted by BEDROCK GAMES at 5:51 PM