RIGHTEOUS BLOOD PODCAST: THE KID WITH THE GOLDEN ARM

Jeremy and I resumed the Righteous Blood Podcast, where we discuss movies that influenced the flavor and mechanics of our upcoming Righteous Blood, Ruthless Blades RPG (RBRB), and talked about the classic film The Kid with the Golden Arm. 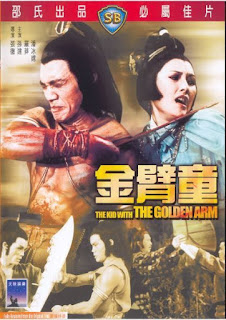 The Kid with the Golden Arm uses a simple plot, the talent of the Venom Mob, and the hand of director Chang Cheh to reliably entertain fans with great fight scenes, tension, twists and likable characters. It has something for everyone, whether you are a wuxia fan or a kung fu junkie. For me this movie is solid all around, with Lo Meng playing a great villain, a cunning and wicked martial expert who has a sense of fairness, loyalty and clearly a personal code.

We talk about how this influenced the Obsidian Bat Adventure (a sample adventure in RBRB), as well as our reactions to the costumes (which could be described as glamorous or over-the-top, depending on one's point of view).

One reason I like to suggest The Kid with the Golden Arm to game masters is it is a very gameable film. It also highlights a lot of key tropes in the genre: poisoning, escort companies, love triangles, the personal codes of the jianghu, etc.

Check out the podcast below and check out The Kid with the Golden Arm as well:

Posted by BEDROCK GAMES at 5:52 AM