As a kid I was a huge fan of Blackadder. I lived in the US, and to my knowledge it never aired on my local PBS station (or at least I was unaware of it airing if it did), so I picked up the series slowly, one VHS tape at a time. I began one series one, which I quite liked. I enjoyed it so much, when I finished the second series 1 tape, I rushed out to pick up the second series. The quality of series 2 amazed me; the writing was sharper, and the characterization of Edmund Blackadder worked a lot more. I devoured the remaining series, and loved them all. Joke after joke had me on the floor. It appealed to my interest in history but also propelled my curiosity about history further. It was formative, both in terms of my academic interests and in terms of helping to shape my sense of humor. 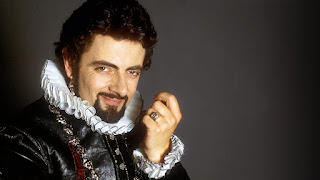 Years later, I was running a Masque of the Red Death campaign. It must have stumbled, or been an off night. I can't quite recall. The bottom line is the session wasn't as horrifying as planned. So I just started incorporating a lot of situational comedy complications: the PCs had a rich uncle, were hosting a large important ball, and their reputations and wealth would be ruined if any of the guests discovered an embarrassing supernatural curse was spreading among the guests. The details I don't recall so well anymore. But I remember the basic thing I did was throw in complications and give the players space to solve them. It just worked well. And everyone laughed the whole time.

This planted a seed of a game I never made. When Bill and I started Bedrock Games, we had a list of things we wanted to make over the next several years. One thing on that list was something we just called "Sitcom: The RPG". But what I really wanted, was to make a Blackadder RPG. There was a Red Dwarf RPG, which I liked at the time. And that gave me the thought it might work.

I had no idea how to secure the license for such a thing though (and doubt I would have been able to even if we had the resources). So it never went anywhere beyond some ideas tossed around in a few meetings (we used to meet and brainstorm all the time). We toyed with the idea of just going with a generic sitcom RPG, but that never really captured out imaginations the way a Blackadder RPG would have. 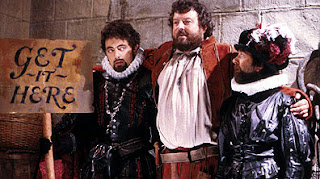 To this day I am curious how it might have come out. It probably would not have been a network game. If it were, the system would have been greatly altered I think. I do recall us bouncing some interesting ideas. But interesting ideas don't always survive playtest, and we never got to the play testing phase on it.

I do remember wanting time to be important. I was hoping for the game to play out over the course of thirty minutes, so the situation would have a real countdown to disaster feel (something I had done a lot in our game Terror Network, except in this case the disaster would probably be more social).

I almost did something like I had done with Servants of Gaius, and make a game greatly inspired by the source material (Servants of Gaius was inspired by I, Claudius). I doubt this is a game idea I will come back to. It is one of those games that never made it past the idea stage.

Posted by BEDROCK GAMES at 6:14 PM