SERVANTS OF GAIUS: A GAME ABOUT CALIGULA

Servants of Gaius was probably my most inspired concept. It came about for a few different reasons and everything in it gelled almost perfectly. When I was young I had a profound interest in Ancient Rome. I had a strong interest in the early empire more than the republican period (though Spartacus is one of my favorite movies). I read a lot of Roman history but also fell in love with a series and book called I, Claudius (and Claudius the God). 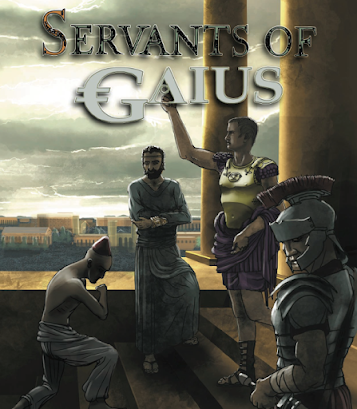 After we made Horror Show I was interested in doing something I, Claudius inspired, but I didn't know how to make it gameable; and gameability has always been a foundational principle of Bedrock Games. Our original motto was: Plausibility, Gameability and Personality. I tried to think of what we did well, and I also thought about what made I, Claudius so compelling to me. At the time, the answer to the former seemed to be "Investigations" and "players belonging to organization, often of a clandestine nature", and the answer to the latter was: the relationship between Claudius and his Nephew Caligula. That portion of the story, where we watch Claudius balance the desire to survive and loyalty to his family was both the most terrifying the most warm-hearted aspect of I, Claudius. So I decided to set the game in that environment.

Initially I was going to make Caligula the bad guy. But this had all kinds of problems, in terms of being a gameable setting. Also, because Horror Show had suffered from my stint in the hospital,I wanted the concept to be something really special. I came up with the idea that Caligula was never actually mad in the first place. It really wasn't much of a stretch. It is a central question that plagues Caligula throughout the I, Claudius series (is he really a god or just mad). So if the answer was, no he was really a god, that could both explain his eccentric behavior, while opening up all kinds of potential for him being misunderstood. The historical consensus is that Caligula was a bad person, but there are a handful of books with more sympathetic takes. And I drew a bit on these, to help explain some of the forces working against him. However the chief antagonist I took right from history and from I, Claudius: Caligula would be a god waging a war against Neptune and his forces. 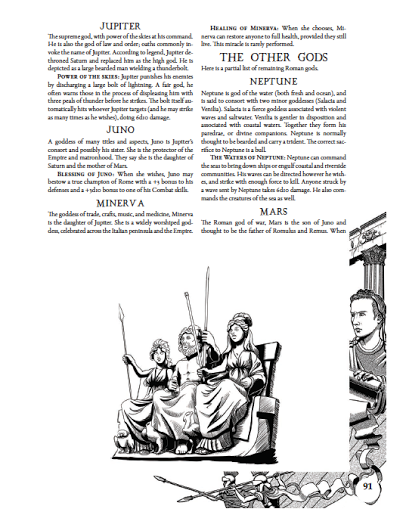 I quite liked this concept once it crystalized, and it worked amazingly well in play. The players would take on the role of members of a secret organization headed by Caligula's uncle Claudius. Their role was to protect Rome from the threat of Neptune. To make it more interesting, Neptune would operate through a mystery cult and through impersonators who could assume the identities of influential romans. This really helped push the game in the direction of mystery and adventure. And this was important because there is a whole genre of historical fiction about Roman mysteries which also had a very big influence on the game (I was particularly influenced by Lindsey Davis' Marcus Didius Falco series, and by Steven Saylor's Roma Sub Rosa series).

The game worked great once we had all those pieces in place. We were still trying to make games of roughly 100 pages so that limited some of the content. In the end though, I think that does often make for a tighter game (which is why I shifted back to smaller books with Strange Tales of Songling).

Servants of Gaius is one of our gems, and not a lot of people know about it. It does have some rough edges. I wasn't as consistent as I should have been obtaining art for this one. So some of the formatting of the weapons and NPC images contrasts sharply with the feel of the book. This is a book that I have actually thought of redoing the art for at some point. I do not know the feasibility of this, as it might need to be laid out again as well. But it is a project I hope to eventually return to touch up (not revise, just give it a new cover, more art, and more visual refinement to reflect the content better).

In the meantime, it is one of the games from our back catalog I strongly recommend checking out.

Posted by BEDROCK GAMES at 8:35 AM