I realized I hadn't quite made an official announcement about Righteous Blood, Ruthless Blades. I have commented about it here, posted about some of the design goals, but I haven't provided a clear announcement. 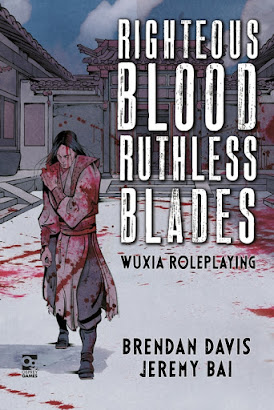 Righteous Blood Ruthless Blades is a dark wuxia RPG, written by myself and Jeremy Bai. Our aim was to capture the feel of the style of wuxia in Gu Long stories and Chor Yuen movies. We wanted something that was more gritty, dealt with weightier themes and presented an unflinching view of the Jianghu.

RBRB is fast, lethal, and dark. It will be released December 10th in the UK, and December 8th in the US. It can be pre-ordered HERE.

You can listen to our podcasts about the design to get some insight into what to expect.

Our aim was to make a game was light enough to fade into the background, but deep enough to emulate the intricacies of the wuxia genre (particularly the martial abilities). I think we achieved our goal and am proud of the final result.

A few years ago I made a game called Wandering Heroes of Ogre Gate, my first attempt at a wuxia RPG. It is a good game, but mechanically on the heavier side (which I felt was necessary because I wanted to capture all the kung fu and swordplay I could from the genre). During the years I ran Ogre Gate, I had been thinking of ways to simplify without losing the flavor. What we tried to do was keep the core idea of selecting martial abilities, and codify the counters better (making them a whole separate category). This worked well. We also tried to make many of the abilities broader in application.

One lesson I learned from Ogre was that because the core system was deep on its own, some of the residual depth in the system elsewhere could bog down play. So I wanted a much less extensive section on combat rules. We have key rules in there, but we set a bar that it really has to be necessary to be a part of the game. There was a point for example where we considered not having guidelines on restraining (in the end we reluctantly decided this was needed). Every mechanic was seen as a potential drag on the game, something the GM had to remember and keep in mind during play, or something that would necessitate look-up. And we wanted to reduce all that.

The design became about streamlining and simplifying our ideas as much as possible. But again without losing the emulation.

I also made a point of measuring things. It is easy to say "quick character creation" or "speedy combat". But I timed them both whenever we play-tested. We were particularly interested in combat speed (whereas when I made Strange Tales of Songling, my interest was in very quick character generation). Because we were drawing a bit more on Gu Long stories, many of those feature more efficient combat scenes than Jin Yong stories. There is a bit of a gunslinger or samurai vibe to how Gu Long handles duels. There is often a suspenseful buildup, then the confusing flash of weapons, followed by quick dismemberment or death. It is stylish and fast. And we wanted to capture that.

One of the key ways to make sure this was in the game was to time the combats, and I think we succeeded. Obviously when dice are involved, and different mixtures of characters are in play, you can have much longer fight sequences. But I think the fights play out quite fast on average and this is aided by the fact that the game is theater of the mind (I do not ever use miniatures for my wuxia campaigns).

Another key thing that helped this was how we handled turn order. We placed a talking phase at the start of combat. This is called the "Talking and Analysis Phase". It can be used to simply say something dramatic before the fight begins, but it can also be wielded cleverly to manipulate a foe, get in their head, or decipher something about their skills, so you gain an advantage or edge in the battle. It isn't always a required phase (it can be skipped in instances like ambushes for example). But it is a very good tool.

This is also a gorgeous book. I am very impressed with the color artwork, the maps and layout design.

As we get closer to the release date I will post more thoughts and ideas. In the meantime, check out the preview at Osprey Games.