LUNDO: THE VOICE OF CRIME NETWORK

Crime Network was all about the voice. Of all our games it has the most personality, and is meant to sound like a conversation rather than a rule book. The text is brash and colorful, and written with a Boston accent. The narrator of the core rules and the Gangsters Guide to Organized Crime is a character from the game named Lundo Lipioni, and he was based on my grandfather, Orlando "Lundo" J. Fanti. I made him a hitman, which made him happy because he liked mafia movies, and I channeled his style of speaking into the writing.

The writing style in the Crime Network books was the most fun for me personally. I was able to employ lots of humor using his voice, and really helped bring things to life. I remember when I first showed Bill the manuscript (I had written a draft of the rules before we started Bedrock), he commented that it definitely had lots of personality. 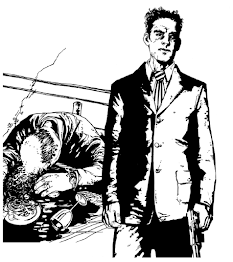 The real man was obviously not a killer, but the book reflects how he spoke, and he worked for the character and the game setting. The image to the right is my favorite one of him in the book. Getting his hair right proved a challenge (he had curly hair like me and that doesn't always show up in art great). The picture below is a real photograph of him. This was probably taken shortly after the married my grandmother (who died a year before I was born).

In real life he was a brick layer. In fact he was born in the Brickyard in Lynn (basically where the Italians lived at that time). He had been an amateur prize fighter before turning professional, but WWII cut his career short (he injured his hands in a jeep accident after the Battle of of the Bulge). He worked other jobs as well (for many years he had a job in the tunnel in Boston for example). But stone and bricks were his trade. The house where I live today is surrounded by the stone walkways and patios he and his brothers build ages ago.

He always had a boxer's personality in my opinion, and you could still see it in his movements, even after he turned 80. And he was the kind of person who couldn't remain idle during the day, he had to be working on something. I remember when I lived in California, he came to visit for several weeks every year, and he would spend all day working our yard (he would trim all the foliage, and dig giant holes to bury the trimmings). I was always amazed to watch him dig what looked like 10 foot by 4 foot holes, several feet deep. At his house he was the same, endlessly mowing, shoveling leaves to burn in his brick furnace, then going to his brothers and sister's houses and doing their yard work (he was the youngest sibling, so this was apparently his duty). 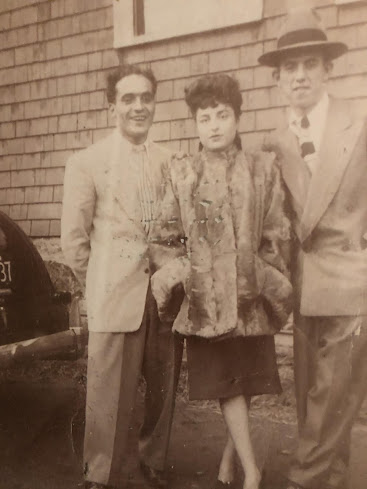 He was also an extremely tough man. I heard stories of him ripping doors of old refrigerators with his bear hands, for example. And he once got stung by a swarm of bees and swelled up, but refused to go the doctor (he also had several heart attacks and didn't go to the doctor for those either).

But he was very family focused and loving. For him, family was the most important thing. Nothing ever equalled family. He was not the type of person to turn his back on a family member, and he was always close with his brothers and sisters (they lived next door to each other until they died, in four adjacent houses).

Like I said, he liked mafia movies. I remember listening to him and my aunt Lily laughing at the violence in them when I was a kid: there is a humor to how mafia movies handle violence. That is probably where a lot of my interest in the genre comes from. I think because of the way they would laugh at the hits, I realized early on that there is more going on than just violence in most of these films.

I should say, while I channeled his voice in the material I wrote for Crime Network, we had other writers on projects at that time. So if you detect any fluctuations in the style, it is due to that (I was the only one who knew how my grandfather talked and I would basically write hearing his voice say these words in my head). If we ever revisited Crime Network, one thing I would do is make sure the voice is consistent through the whole line, and I would probably want to revise some sections as well. For some the style of the books may be a bit on the corny side. Personally I like how they came out. And I it was a wonderful opportunity for me to immortalize a family member like my grandfather.

Posted by BEDROCK GAMES at 4:21 PM